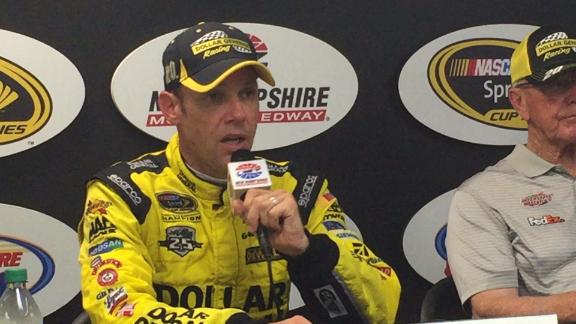 Martin Truex Jr.and Kyle Busch each led more than 120 laps before fading late, paving the way for Kenseth to win for the second time this season.

Kenseth also won the New Hampshire race in September. He has 38 career victories.

"It was pretty much money all day," Kenseth said. "We just had to get there."

Tony Stewart finished second to strengthen his spot in the points standings. Stewart has a win this season and needs to secure a spot in the top 30 in points to earn a spot in the Chase for the Sprint Cup championship. He entered the race in 30th.

"A lot of attrition there got us in the top five," Biffle said. "We've got just a little bit of work to do to get our cars faster."

Alex Bowman had a solid day ruined when he hit the wall late and finished 26th driving for Dale Earnhardt Jr.Earnhardt was sidelined because he was suffering from the symptoms of a concussion.

Truex tumbled to 16th when his Toyota suffered a broken shifter, and Busch dropped to eighth.

That allowed Kenseth, Busch's Joe Gibbs Racing teammate, to cruise to the top and snatch the lead with fellow JGR teammate Denny Hamlin with 30 laps remaining. Kenseth drove away on the final restart with 11 to go in the 301-mile race.

Brad Keselowski failed in his bid to win a third straight race. He followed wins at Daytona International Speedway and Kentucky Speedway with a 15th-place finish Sunday.

But this race could be remembered for solidifying Stewart in Chase contention. He snapped an 84-race losing streak last month at Sonoma and was fifth last week at Kentucky Speedway. Smoke is heating up this summer and could be racing for a fourth championship in his final NASCAR season.