Mavs confident about O'Neal or Smith 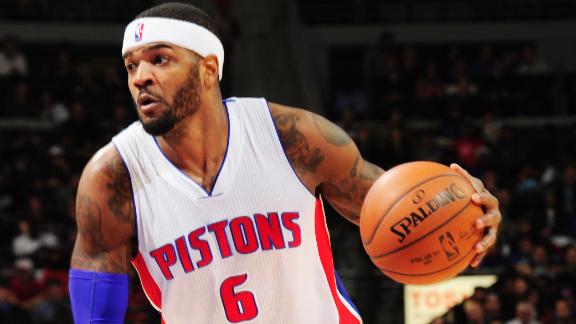 The Mavs, who are searching to replace traded backup center Brandan Wright in their rotation, are among several teams who have expressed interest in O'Neal and Smith, a pair of available high-profile veterans.

"I feel pretty good that we'll be able to come to terms with one," Nelson said Tuesday on ESPN Dallas 103.3 FM. "Certainly to come up with both would be just hitting a grand slam home run. Look, there's a long line for suitors on both fronts.

"I think the fact that Jermaine has chosen Dallas to be his home in the long term certainly has its place and resonates with time with family and such. And here's a guy who has a long history not only with our coach but with our point guard/quarterback. That certainly has a place.

"With Josh, again, we're one of a number of potential teams and suitors. It's got to be right with him and with us. We're kind of in the swings of putting our best foot forward. If we're able to hit that one home, it just would be a real, real nice get for us."

Sources told ESPN.com's Marc Stein that the Houston Rockets are confident that they have the inside track to land Smith, who was released by the Detroit Pistons on Monday less than halfway into his four-year, $54 million contract and is expected to clear waivers Wednesday.

The Rockets have their biannual exception, valued at $2.1 million, to offer Smith, who is 29. The Mavs can offer only the veteran's minimum of $1.45 million.

Both franchises have one of Smith's closest friends to aid their recruiting pitch. Smith played AAU basketball with Houston center Dwight Howard in Atlanta and was roommates and teammates with new Mavs point guard Rajon Rondo at high school powerhouse Oak Hill Academy.

The Mavs are hoping to persuade Smith, a starting forward his entire career whose suitors also reportedly include the Miami Heat, Sacramento Kings, Los Angeles Clippers and Memphis Grizzlies, to come to Dallas as a sixth man who will play center and forward.

"If he did fit and if he joined us, it would be a sixth man situation, but we'd see him as a starting-caliber-type guy," Nelson said. "He's got a very rare combination of strength and versatility. He'd be a great addition for whatever team is lucky enough to get his services, but he understands and is fully aware that we have a power forward that we're very comfortable with and Tyson [Chandler] has got the center position locked down, so he would be a heck of a piece at any one of our three front-line positions."

Sources told ESPN.com last week that O'Neal, who opted to spend the start of this season with family and focusing on business interests while deciding whether to come back for what would be his 19th season, is "highly intrigued" by the idea of joining the Mavericks as a free agent in the wake of the Rondo deal.

ESPN.com reported earlier this month that O'Neal -- a six-time All-Star who played two seasons alongside Rondo in Boston -- intends to make a definitive declaration about his playing future early in 2015. But sources said Friday that timetable might be moved up because O'Neal would naturally need some time to work his way into game shape.

NBA front-office sources say that the Clippers,Cleveland Cavaliersand Golden State Warriors are also among the teams with a strong interest in O'Neal should he decide to play on.

But O'Neal maintains his offseason home in the Dallas/Fort Worth area and has long been interested in joining the Mavericks to reunite with his former Indiana Pacers coach Rick Carlisle. Heading into the 2013-14 season, O'Neal had serious negotiations with the Mavericks before ultimately signing a deal with Golden State and enjoying a productive season as one of the Warriors' locker room leaders.

O'Neal, 36, addressed his situation in a series of tweets on Tuesday, saying he has yet to decide but is confident he can perform "probably better than 60% of the bigs in the league today!" O'Neal concluded with: