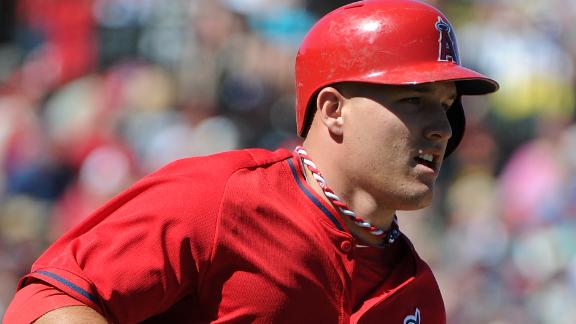 ANAHEIM, Calif. -- Mike Trout gave a big wave when he bounded onto the stage at the Los Angeles Angels' fan fiesta Saturday, a plaid dress shirt tucked underneath his red No. 27 jersey. The crowd responded with wild cheers and "M-V-P!'' chants for the best young player in baseball.

Trout is beloved at the Big A, and now he can stay under that comfortable halo for at least another seven years.

The 22-year-old center fielder formalized his new six-year, $144.5 million deal shortly before the Angels' final exhibition game, committing to the club through 2020.

"I love it here,'' said Trout, who makes $1 million this season. "I think it's the best opportunity for me to be here, and over the next seven years, it's going to be a big jump in my life.''

Trout had no problem giving up a few years of free-agent freedom in exchange for lifelong financial security and a chance to keep playing in sunny Orange County for a wealthy franchise capable of winning the World Series. He praised Angels owner Arte Moreno for giving the club every chance to succeed despite its current four-year absence from the postseason.

"When the owner comes out and puts up these big numbers, like $33 million, it's hard to turn down,'' Trout said. "For security as well, obviously, you never know what could happen. You could get hurt during the season. You never know.''

He also receives a full no-trade provision and the right to a luxury suite at Angel Stadium for 20 games per year starting in 2015.

Trout is the first player with less than three years of service time to sign a deal worth more than $20 million annually, but nothing about Trout has much precedent.

The two-time AL All-Star finished second to Detroit's Miguel Cabrera in the MVP voting in each of the past two seasons while putting up astronomical offensive numbers and playing above-average defense. He is batting .314 with 62 homers and 196 RBIs in just 336 career games.

The Angels' nine-figure commitment definitely didn't scare Moreno, who would have liked to lock up Trout for even more years.

"Let's put it this way: We definitely didn't want to go shorter, and we would have liked to have gone longer, so we sort of compromised here,'' Moreno said.

Moreno acknowledges he could have gone to arbitration with Trout for the next three years to limit the Angels' financial exposure, but he wasn't interested. After doling out lavish free-agent deals to Albert Pujols and Josh Hamilton, Moreno was grateful to reward the Angels' homegrown talent.

"I would like to tell you that there was some map to go by, but we really were in uncharted waters,'' Moreno said. "What we want to do is make a fair deal. We had all their proposals, and they had all of ours, and when we sat down, we were really very close at the end. Both of us kept inching toward the middle.''

Trout's salary decision could have a trickle-down impact in future seasons in arbitration on up-and-coming stars like Washington's Stephen Strasburg and Bryce Harper or the Mets' Matt Harvey.

Trout's father, Jeff, was involved in negotiations along with his agent, Craig Landis, since shortly after Thanksgiving. While Landis realizes the deal will be criticized by other agents who believe Trout should have milked every dollar out of his unique talent, Trout wasn't interested.

Trout said Hunter told him "it's my choice. It doesn't matter what anybody else thinks. If I think it's the right choice, do it. With the security it's given me and my family, it's unbelievable.''

Trout acknowledged the "last month has been crazy,'' but it didn't prevent him from batting .407 in spring training.

Trout doesn't plan to buy anything special with his newfound wealth, but he has one pressing financial commitment to his teammates. Pujols, Jered Weaver, Erick Aybar, C.J. Wilson, Kole Calhoun, Raul Ibanez and several other Angels sat in the audience at Trout's news conference, goofing on their young teammate from the crowd.

"When I go out to dinner now, they're just telling me, 'We'll wait. We're waiting, we're waiting,''' Trout said. "'Whenever you get that big contract, you're going to start buying.' ''

Trout Gets Extension With Angels
Baseball Tonight breaks down Mike Trout's six-year contract extension with the Angels worth $144.5 million.