MLB reduces Rougned Odor's suspension for punch by one game 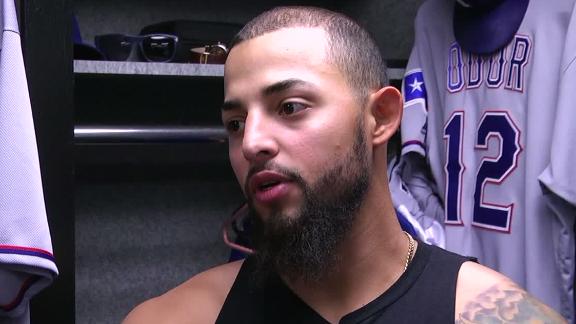 Odor punched Bautista in the jaw after Bautista slid at Odor's legs in an attempt to break up a double play in the top of the eighth inning of the host Rangers' 7-6 win on May 15. Players from both teams rushed the field, and Odor shoved Bautista and then landed the punch. Bautista had reached base after being hit by a pitch from Matt Bush.

The league disciplined 14 players and staff for their actions in the brawl. Eight players were ejected from the game between the two teams that met in last year's postseason, with six of the dismissals stemming from the brawl sparked by Odor's punch and the aftermath.

Bautista was given a one-game suspension for his role in the incident, and his appeal was heard Thursday.

Odor, while saying after the incident that he had no regrets for what transpired, has since said he respects Bautista and looks to move forward.

"I think it's over. It's in the past," Odor said through a translator.

The brawl happened in the final regular-season meeting between the two clubs. A feud had been simmering between the teams since last year's American League Division Series, during which Bautista demonstratively flipped his bat following a home run in Game 5.

Blue Jays manager John Gibbons has already served a three-game suspension for returning to the field after he was ejected, while first-base coach Tim Leiper got a one-game ban for returning to the dugout after his ejection. Rangers shortstop Elvis Andrus was suspended one game for "aggressive actions during the incident."