NASCAR encourages 'hard racing' from drivers without crossing the line 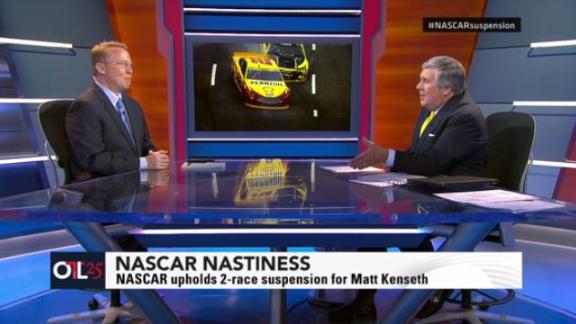 FORT WORTH, Texas -- NASCAR reiterated its expectations of drivers when they met for their prerace meeting Sunday morning at Texas Motor Speedway.

"I want to take a minute just to remind everybody that everyone at NASCAR expects and encourages hard racing, and that's not going to change," O'Donnell told the drivers. "Where we will react is when we see something that goes out of bounds of hard racing.

"What happened in Martinsville crossed the line, and we reacted. So I think we expect, and certainly our fans expect, everybody to go out today with good, hard racing. So I'd ask everybody to go out and put on a great race, and let's showcase what NASCAR is all about."

Kenseth was suspended for two races as a result of the Martinsville incident.

The race Sunday is the second race of the three-race Eliminator Round. Jeff Gordon, the winner at Martinsville, plus three others among the eight remaining Chase drivers will be eligible for the championship in the Nov. 22 season finale at Homestead-Miami Speedway.

Logano has six wins this year, but because of being wrecked by Kenseth (who was eliminated in the previous round), he currently sits eighth in the standings and is among those in danger of not advancing if he can't win Sunday or next week at Phoenix International Raceway. His Team Penske teammate, Brad Keselowski, is on the pole Sunday.