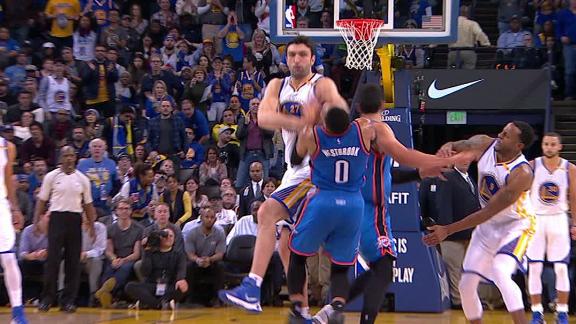 No discipline is expected for either player, but sources told ESPN that the NBA, which reviews all flagrant fouls, is expected to look into the "totality" of the incident. Pachulia knocked Westbrook down in the second quarter of the Warriors' eventual 121-100 victory, which prompted Westbrook to say afterward of Pachulia that he's going to "get his ass back."

"He hit me kind of hard," Westbrook told reporters after the game. "But it's all right. I'm gonna get his ass back. Straight up."

NBA executive vice president of basketball operations Kiki Vandeweghe, who is in charge of league discipline, is attending the annual NBA D-League Showcase in suburban Toronto this week but declined comment Thursday when sought by ESPN.

As halftime approached Wednesday night at Oracle Arena, Pachulia was whistled for a flagrant foul 1 following a review by game officials after appearing to push the ball into Westbrook's face as the players collided.

What appeared to upset Westbrook most was the 6-foot-11, 275-pounder's reaction to the foul; Pachulia stepped up and stood over Westbrook while the All-Star point guard was holding his face on the floor.

"No, I didn't see that until just now, but I don't play that game," Westbrook said postgame, explaining that he wasn't aware of Pachulia's response to the foul until seeing a replay later.

"I'm gonna get his ass back," Westbrook said. "Whenever that is, I don't know what it's going to be, but I don't play that game."

The Warriors visit the Thunder on Feb. 11 in Kevin Durant's first return to Oklahoma City since he left for Golden State in free agency last summer.

Pachulia added that he's not concerned about Westbrook's comments about potential retaliation.

"We're thinking about this team and staying healthy moving forward and, better, getting into the playoffs and playing for the championship," Pachulia said. "That's what I'm thinking about. I'm not thinking about these kind of comments. That team is not there, so they might be thinking about other stuff, like getting back. So, you know, OK, you can get me back.

"But this is my 14th year. We all know what my game is, to play hard. Not dirty, but play hard. If it was a hard foul, it was a foul. It wasn't dirty at all, so I'm not worried about this."

"They get away with a lot of stuff, but it is what it is, man. That's the game of basketball. We're going to be ready for them next time."