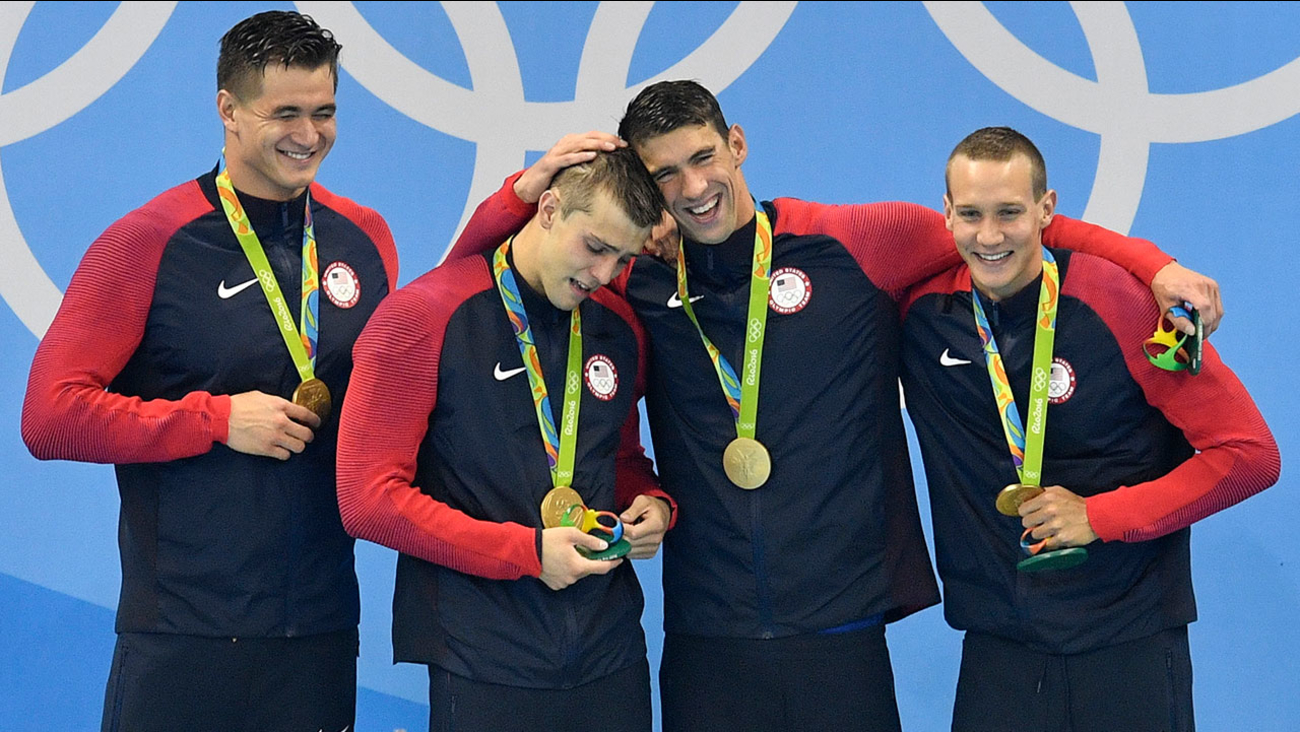 Held broke down crying, his shoulders shaking, his eyes squeezed shut after the Americans won on the second night of swimming at the Rio de Janeiro Olympics. Caeleb Dressel, Michael Phelps, Nathan Adrian and Held teamed to claim the gold in 3 minutes, 9.92 seconds for the first time since the 2008 Beijing Games.

Standing between Adrian and Phelps, Held bent his head and brought his left hand to his face as the anthem blared. Phelps saw what was happening and offered a supportive hand around Held's neck.

"I didn't think I was going to cry. I was too tired to cry, I didn't think I could cry," Held said. "I've heard the national anthem hundreds of times, but as soon as that played it was just something different. The tears just started rolling down my face."

On the stroll around the deck, gold medals slung around their necks, Dressel lost it, too. He brought his right arm across his face to wipe away tears.

"They were making us cry," said Phelps, who had a tear roll down his cheek while posing for photographers.

Adrian swam the anchor leg for a team highly motivated to bring Olympic gold back to the U.S. The Americans lost the race four years ago in London and didn't even make the final at last year's world championships in Russia, when Phelps was suspended for his second DUI.

Adrian smiled as he comforted his younger teammates.

"I love a little emotion," he said. "I had to fight back some tears myself."

Dressel, a sophomore at Florida, and Held are Olympic rookies. Heck, the Rio de Janeiro Games are the first international meet of Held's career. The sophomore at North Carolina State didn't make the U.S. team in an individual event, so getting the chance to swim the relay final with veterans Adrian and Phelps was huge.

"I thrive off their energy, I feel more confident," Held said. "I feel like I stand a little bit taller with those guys. Michael and Adrian, they're like, 'Once in a lifetime experience, let's go after it, have fun, let the emotions feel you.'"

Phelps had counseled Dressel and Held ahead of time that it was OK to sing and cry on the medal stand.

"It's good to see the emotion of those young guys. It shows they really do care and they love what they're doing," said Phelps, who earned his record 19th Olympic gold medal.

Held marveled at his good fortune to have helped add to Phelps' glittering collection.

"Holy cow, it's unreal, unbelievable," he said. "To be with him and to be teammates on his last hoorah, it's amazing."