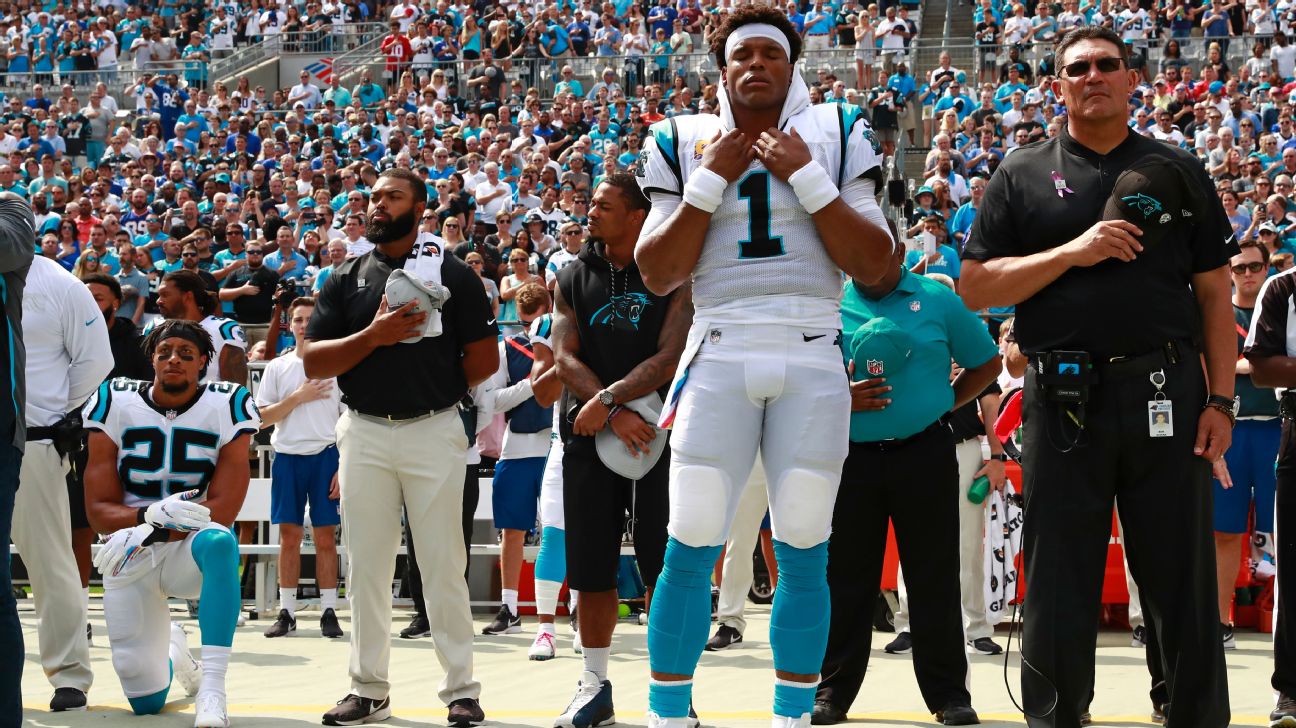 CHARLOTTE, N.C. -- The Eric Reid era with the Carolina Panthers began Sunday with the free safety taking a knee during the national anthem as his protest against social injustice continued with his new team.

Reid stood near midfield until the anthem began, then went to one knee as he did with the San Francisco 49ers from 2016 through last season.

The Panthers signed Reid during their bye last week to replace Da'Norris Searcy, who was placed on injured reserve after suffering his second concussion in a month.

Reid spoke to the media in Charlotte for the first time last Monday wearing a black T-shirt with #IMWITHKAP on the front. He made it clear his fight against social injustice and police brutality wasn't over even though his return to the NFL came more quickly than he expected.

He said his collusion suit against the NFL "without a doubt" will continue and added that he's still considering other ways to protest during the anthem as he and former 49ers quarterback Colin Kaepernick began doing in 2016.

On Sunday, prior to kickoff against the New York Giants, he made his decision known.

"Everybody in this [locker room], everybody who watches this game [and] everybody in this country knows what we're talking about. It's the truth. You can't deny it. We've just got to do more to make this better," Reid said on Sunday after Carolina's 33-31 victory over the Giants.

Reid wasn't the only NFL player to protest during the anthem this weekend. Miami Dolphins receivers Kenny Stills and Albert Wilson continued their protest of police brutality and social injustice by kneeling during the national anthem Sunday at Cincinnati. Stills has knelt in protest since 2016, and Wilson has knelt with him every game this season. Dolphins defensive end Robert Quinn raised his right fist during the anthem.

Kaepernick took to Twitter to applaud Reid and others for continuing to protest.

No other Carolina players joined Reid's protest. The last member of the Panthers to protest was defensive end Julius Peppers, who stayed in the locker room prior to the anthem last season when players around the league protested.

Several high-profile Carolina players said they were prepared to support Reid, a 2013 Pro Bowl selection, if he protested.

"Hey, no one cares," wide receiver Torrey Smith said last week. "It's not like he's out there and Coach calls Cover 3 or man-to-man, he's going to take a knee and let his guy run by. If that was the issue it would be a problem.

"Eric knows what's best for Eric and what Eric needs to do. We all understand what he's fighting for, so if that's something he decides to do, that's what he decides to do. But that has absolutely nothing to do with this locker room, the way we approach the game, the way we prepare and what we're trying to do."

"We have great players in this locker room and we've accepted him with open arms," Newton said. "I was thinking to myself, I hope he was and is as excited as everyone is having him. He's a very young, talented football player that has a lot of talent left in his body. For him to be on our team is a great thing.

"I'm going to stand by him knowing none of that will be a distraction for us winning football games."