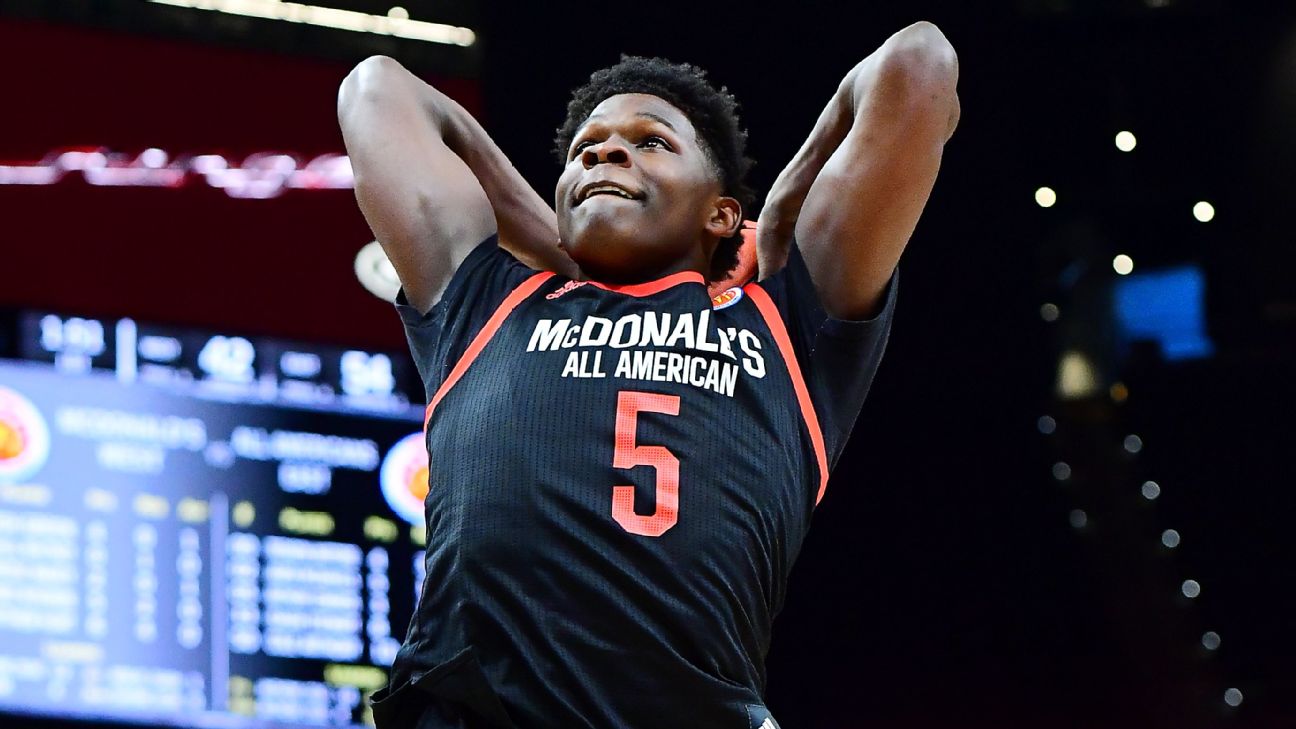 As college basketball's 2019-20 campaign approaches, it's important to know the new names and faces that have either arrived as prep prospects or joined new programs via the transfer portal. It's difficult to keep track of the game's offseason personnel moves, but we're here to help. The following is a list of the top freshmen, grad transfers and sit-out transfers who could make the biggest impacts on their respective teams this season.

Some of the names are obvious. Others on this list, however, haven't received the hype they deserve:

He's the projected No. 1 pick in ESPN.com's 2020 mock draft and the star of a stacked recruiting class that's turned Memphis into a potential contender in Penny Hardaway's second season. The 7-foot-1 big man is still raw on offense, but he changes everything on defense for a Tigers squad that allowed American Athletic Conference opponents to make 49% of their shots inside the arc a year ago.

He's a strong, 6-5, 225-pound wing who could reverse the fortunes of a Georgia squad that finished 11-21 in Tom Crean's first year. Edwards, the No. 4 recruit in the 2019 class, could emerge as an All-American candidate and a hero with the Bulldogs if he leads a young team into bubble contention.

With Stewart and Jaden McDaniels, a pair of projected lottery picks in next summer's NBA draft, Mike Hopkins has the anchors of a Washington team that's beginning to look like "Syracuse: the West Coast edition." Stewart is a powerful man-child who averaged 18.1 PPG, 11.3 RPG and 2.9 BPG as a senior in high school. He should record impressive numbers in his freshman season at Washington too.

North Carolina's new point guard is a polished prospect with the pedigree (his father, Greg Anthony, won a national title at UNLV in 1990 before his lengthy pro career) of a future NBA player. The ACC is good, as per the norm, so it's up to Anthony to help North Carolina remain in the hunt by incorporating the program's new pieces, such as grad transfers Justin Pierce and Christian Keeling.

The loss of Brandon Williams to a season-ending knee injury upped the pressure on Mannion, a flashy point guard and top-10 recruit with an NBA future, to lead the Wildcats. With Josh Green, Arizona has one of the best young backcourts in the country. Mannion can help Sean Miller's program chase another Pac-12 title.

Kentucky is loaded again -- nothing new under John Calipari. But the Wildcats lost Tyler Herro and Keldon Johnson, and the 27.5 PPG combined they produced, to the NBA. But Maxey is a 6-3 athletic wing and future pro who has to fill that void for the Wildcats. Kentucky has to find a catalyst on offense. Maxey tops the list of internal candidates.

The national championship talk in Gainesville is real, but not simply because Kerry Blackshear picked the Gators. Lewis is a versatile, 6-5 talent who should help the Gators extend their streak to eight consecutive years of finishing within the top 25 of Ken Pomeroy's defensive efficiency rankings while creating matchup drama for every opponent.

Duke lost Zion Williamson and his unstoppable nature around the rim, but Carey's finesse will ensure more dominance in the paint for the Blue Devils. He's comfortable with the 15-foot jumper too. At 6-10, 270 pounds, he'll give point guard Tre Jones a capable target as Duke "rebuilds" after losing Williamson, RJ Barrett and Cam Reddish.

Leonard Hamilton's squad has averaged 26 wins per season since the 2016-17 campaign. Williams, a 6-8 forward projected as the No. 20 pick in next summer's NBA draft, has to be a go-to scorer for a program that lost Terance Mann and Mfiondu Kabengele to the NBA. If that happens, Hamilton should field another solid team with NCAA tournament aspirations.

Tennessee won't replace Admiral Schofield, Grant Williams and Jordan Bone, a trio that turned Tennessee into one of the best teams in America last year. But James, a five-star recruit and NBA prospect, could help the Vols secure their third consecutive trip to the NCAA tournament. A backcourt with Jordan Bowden, Lamonte Turner and James is potent.

Michael White is one of the best coaches in America, but he seems to get overlooked each year. That could change with the addition of Blackshear, who averaged 14.9 PPG and 7.5 RPG at Virginia Tech last year. He was the most coveted grad transfer on the market after making 55% of his shots inside the arc. The Gators could cut down the nets in Atlanta with Blackshear.

Mark Few's pursuit of a national title continues with another powerhouse Gonzaga team that will need Gilder to shoot the way he did in 2017-18 when he made 39.5% of his 3-point attempts, 50% of his shots inside the arc and 82% of his free throws for Texas A&M. He missed last year due to injury.

The Reid Travis experiment worked for Kentucky, and now John Calipari is hoping another grad transfer will inject his young team with discipline and experience. At Bucknell, Sestina averaged 15.8 PPG and made 38% of his 3-point attempts last year. He'll join EJ Montgomery, Nick Richards and five-star recruits Kahlil Whitney and Keion Brooks in one of the nation's strongest frontcourts.

It seems as if Dana Altman's plan is to just overwhelm opponents with long, talented athletes, the same formula he employed during his team's Final Four run in the 2016-17 season. That's why he added a 6-7 athlete such as Juiston, a transfer from UNLV who played in just eight games last season. He was a junior college All-American before he averaged 14.6 PPG and 10.0 RPG for the Runnin' Rebels in 2017-18.

Both Pierce and Christian Keeling, who made 38% of his 3-point attempts at Charleston Southern last year, should help the Tar Heels compete for another ACC title after Roy Williams returns just three players who averaged more than 10 minutes per game last year. Pierce, a grad transfer from William & Mary, is a 6-7 playmaker who averaged 14.9 PPG, 8.9 RPG and 4.1 APG last season.

Clarke has been the center of controversy in recent years. He was suspended in 2018-19 for undisclosed reasons, and a drug possession charge against him was recently dropped. He's hoping for a fresh start at Texas Tech, where he can play a significant role for a team coming off a run to the national title game. He made 60% of his shots inside the arc in 2017-18.

Dana Ford's Missouri State squad finished 16-16 last season and then lost three starters. But the transfer market has been good to Ford, who now has West, a 6-8 forward who arrives from West Virginia. West, who produced seven games with 20 or more points last season, is a significant addition who could help Missouri State capture the Missouri Valley Conference title.

Travis Steele had an NIT squad a year ago in his first season as Xavier's head coach. But he returns four double-figure scorers who give him a chance to lead this team to the NCAA tournament. Carter's arrival from Ohio, where he averaged 16.5 PPG and 6.7 RPG last season, enhances the depth of a program that could surge in Steele's second year.

With his cousin Jarron Cumberland recovering from a foot injury, Jaevin Cumberland's presence becomes even more important for a Cincinnati squad that might not have the reigning American Athletic Conference player of the year at full strength to start the season. But Jaevin, who averaged 17.2 PPG and made 40% of his 3-point attempts for Oakland last year, should help the Bearcats stay afloat as their star gets back to competing at 100 percent.

Georgetown is a program on the rise entering Patrick Ewing's third season at the helm. Now, the legendary center boasts one of the best big men in the country. Everybody wanted Yurtseven, who averaged 13.5 PPG, 6.7 RPG and 1.8 BPG (he also connected on 22 of 44 3-point attempts) for NC State in 2017-18. He elevates the Hoyas in a competitive league.

Houston is still awaiting a verdict on Grimes' waiver application to compete immediately after transferring from Kansas earlier this year, which is why he's on this list. If he's available, Kelvin Sampson will have a former McDonald's All-American in his backcourt after losing Galen Robinson Jr., Corey Davis Jr. and Armoni Brooks. Houston could return to the NCAA tournament.

The midseason addition of the former five-star recruit and Kentucky player could shift the Pac-12 race if Green fits with this group of talented athletes around him. It will be similar to what Green experienced at Kentucky. He'll have NBA prospects, such as Isaiah Stewart and Jaden McDaniels, and the responsibility to put them in the best collective position to shine.

The Florida State transfer is the missing piece at point guard for an Ohio State team chasing a Big Ten title and a lot more. Kaleb Wesson is one of six returning players who averaged 6.0 PPG or more last season. Walker, who averaged 8.0 PPG and 2.4 APG for Florida State's Elite Eight squad in 2017-18, is a major addition.

Earlier this month, Baylor took a hit when Mario Kegler (10.5 PPG, 5.8 RPG) decided to turn pro after he'd been indefinitely suspended by the school. Teague averaged 16.7 PPG and made 42.5% of his 3-point attempts at UNC Asheville in 2017-18. The Bears will need the help on offense without Kegler.

At Kennesaw State, Scott averaged 17.3 PPG and made 80% of his free throw attempts in 2017-18. Now, he'll join Quinton Rose and Nate Pierre-Louis at Temple, where new coach Aaron McKie might have the league's most intriguing team. If Scott clicks with his new teammates, Temple could rebound.

Iowa State lost its top three scorers from last year, so Steve Prohm begins 2019-20 with a lot of unknowns. But the experience of Nixon, a senior who transferred from Colorado State last season, should ease some of the hurdles for his young team. The 6-2 guard averaged 16.1 PPG at Colorado State in 2017-18.

Flynn's arrival from Washington State has fueled the buzz surrounding San Diego State and its chance to win the Mountain West title. Now, Brian Dutcher's program has to get past a great Utah State team to achieve that feat. But Flynn, who averaged 15.8 PPG and 4.3 APG, might be the best player in the conference or at least the best player in the conference who is not named Sam Merrill.