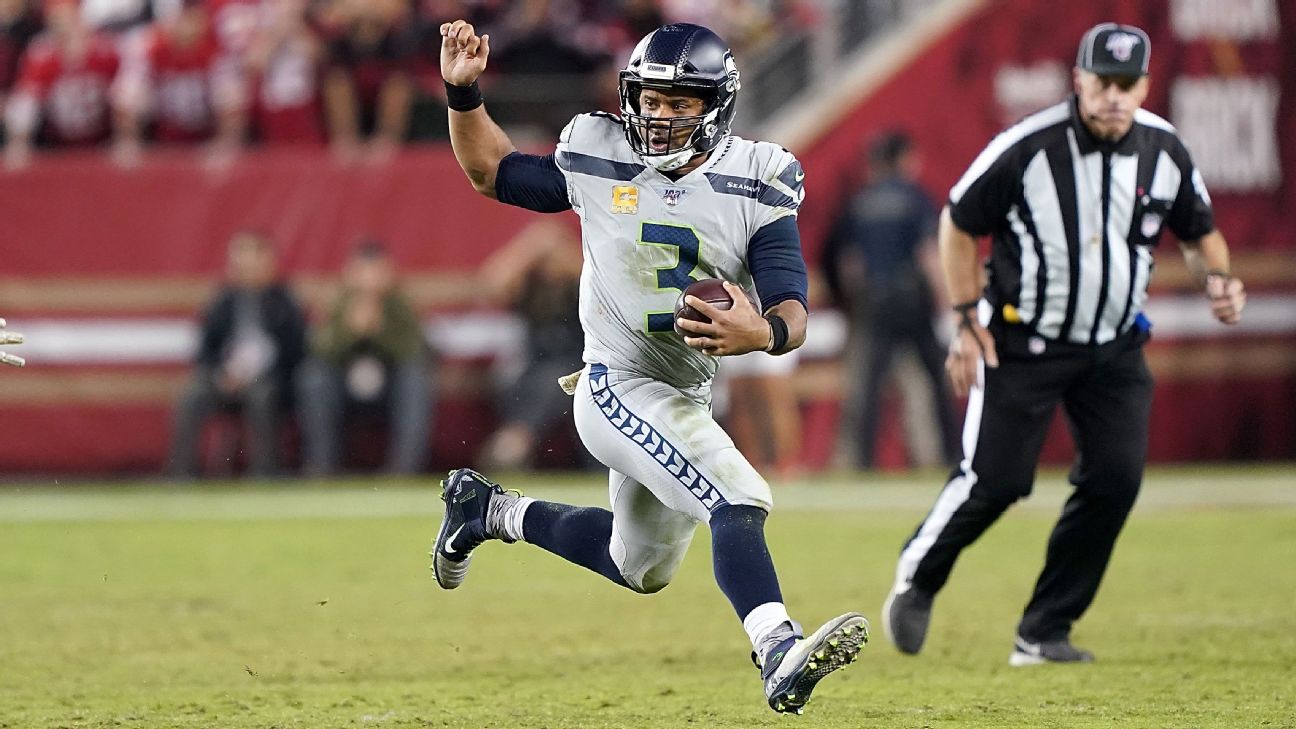 Ten weeks down, seven to go in the 2019 NFL season. The MVP race is at full speed, and as we move further beyond the halfway point into the final stretch of November and December games, three candidates make for an especially tight race right at the top.

First, the procedure: A panel of seven analysts -- Matt Bowen, Mike Clay, Courtney Cronin, Jeremy Fowler, Dan Graziano, Kevin Seifert and Field Yates -- vote every four weeks on the top players in the MVP race. We use those seven sets of rankings to give our top five candidates overall, using Heisman Trophy-esque scaling for each ranking.

We also look at a few names who have seen their MVP stock either spike drastically or plummet over the past four weeks.

So how does the field stack up through Week 10? Here are the players headlining the MVP race.

In the self-proclaimed "craziest" game of his NFL career, Wilson delivered an MVP-like performance Monday against one of the league's best defenses at San Francisco, posting the highest total QBR (71.8) of any quarterback against the 49ers this season. Wilson earned his 28th game-winning drive in the fourth quarter or overtime, which ties Matthew Stafford for the most in the NFL since 2012. He made a handful of crucial third-down throws in overtime, but it was his 18-yard run on third-and-3 that set up the Seahawks for the winning field goal.

This victory comes a week after Wilson became the true front-runner for the MVP award, throwing for 378 yards, five touchdowns and no interceptions in an overtime victory against Tampa Bay. Wilson continues to lead the NFL in touchdown passes (23) and passer rating (114.9).

The Ravens had an opportunity to annihilate the NFL's worst run defense in Week 10, but Jackson did the bulk of his damage through the air against the Bengals, posting a perfect passer rating (158.3) in just three quarters while throwing for 223 yards and three touchdowns. He is the only player in NFL history with a perfect passer rating in multiple road games in the same season, according to ESPN Stats & Information research, something he accomplished against Miami and in Cincinnati. And his 99.7 Total QBR was the highest posted by any quarterback this season, surpassing his own 99.4 from Week 1.

The things Jackson does every week will hold you spellbound, from the way he ripped through the Patriots' top-ranked defense and dazzled against the Bengals with his 47-yard spin-move touchdown -- the longest rushing score by a quarterback since 2017. Jackson is the source of many iconic moments this season and has a chance to create some more when he goes head-to-head with another MVP favorite in Deshaun Watson on Sunday.

In his first nine games, Watson reached career highs in passer rating (107.1), completion percentage (70.2%) and passing yards per game (270.2). He has plenty of MVP-worthy moments, such as throwing a winning touchdown pass against the Raiders after being kicked in the eye and leading Houston to a blowout against Jacksonville the following week in his fourth game this season with multiple passing touchdowns and no interceptions. The only player with more such games is Wilson (seven).

The Texans are atop the AFC South because of what they're doing offensively with Watson at the helm. In two full seasons' worth of games, Watson has 75 total touchdowns, the second-most during such as span in NFL history. Coming off a bye in Week 10, Watson has the chance to put his MVP candidacy front and center when he faces off against Jackson and the Ravens.

McCaffrey will likely need to break multiple NFL records in order to muscle the three quarterbacks ahead of him out of the way for the MVP award, given the devaluation of the running back position. He is tied for tops in the NFL in both rushing touchdowns (11) and total touchdowns (14), and he averages the most rushing yards per game (109.9) despite having played a game less than most of his contemporaries on the leaderboard.

McCaffrey has rushed for over 100 yards six times this season, including 108 yards on 20 carries in difficult conditions at Green Bay, and has been the centerpiece of the Panthers' offense ever since Cam Newton went down with injury. In no way does Carolina's mediocre 5-4 record reflect upon McCaffrey's accomplishments, as he has scored 38.2% of his team's points. The running back has carried more than his share of the load offensively for a Panthers team that is fighting to remain in the playoff conversation.

Rodgers' 2019 figures aren't nearly as gaudy as they've been in the past, but the Green Bay quarterback's 102.7 passer rating is the highest he's posted in three seasons. His 17-2 touchdown-to-interception ratio remains one of the best marks in the NFL and has helped the Packers to jump out to an 8-2 record, their best 10-game start since 2011.

Rodgers will continue to remain in the MVP mix if Green Bay maintains a hold on the NFC North down the stretch, and it might not be long before his teammate Aaron Jones joins him in the MVP conversation. In fact, the quarterback is encouraging fans and media alike to give the running back, who is tied for an NFL-best 14 total touchdowns and 11 rushing scores with McCaffrey, the recognition he deserves.

Dalvin Cook, RB, Minnesota Vikings: Cook's 1,415 yards from scrimmage are the most through 10 games in Vikings history and the most by any player during that same number of games over the past five seasons. He's notched 100 yards of offense in eight different games this season, including 183 yards from scrimmage against a dominating Dallas run defense. Having played one more game than McCaffrey, Cook leads the league in touches (243), rushing attempts (203) and rushing yards (991), which is remarkable when you consider that the Vikings also have two superstar receivers in Adam Thielen and Stefon Diggs.

Patrick Mahomes, QB, Kansas City Chiefs: Mahomes came back from injury and threw for 446 yards in a loss at Tennessee. His individual accolades will continue to keep him in the conversation despite the Chiefs' 6-4 record, and the 24-year-old quarterback still has time to make up some ground in the MVP race. The records he's broken this season will certainly help with that, too. Mahomes surpassed Hall of Famer Kurt Warner for the most passing yards (8,007) through 25 career games and Dan Marino for the most passing touchdowns (68) in that same stretch. He also has the highest passer rating and the most completions in his first 25 starts of any player in NFL history.

Dak Prescott, QB, Dallas Cowboys: The fourth-year quarterback has elevated his game in some pretty remarkable ways this season, and if not for a handful of questionable coaching decisions against Minnesota, Prescott's Joe Montana-esque performance would've had the Cowboys at 6-3. Prescott had arguably the most complete game of his career, especially with Ezekiel Elliott essentially taken out of the game early by the Vikings' defense. He is No. 1 in Total QBR, total points, expected points added and completion percentage over expectation. And Prescott has shown that he's just as deserving as any quarterback on this list of being in the MVP conversation.

All signs point to Fitzpatrick or Aaron Donald earning Defensive Player of the Year honors. The way the Pittsburgh safety has transformed this defense from a decent unit into one that has the Steelers entering the playoff conversation is incredible. Since he was acquired via a trade ahead of Week 3, Pittsburgh has 24 takeaways, seven of which Fitzpatrick is directly responsible for. The Steelers didn't allow the reigning NFC champion Rams to score an offensive touchdown in Week 10, a game in which Fitzpatrick returned a fumble 43 yards for a touchdown and had the decisive interception late in the fourth quarter.

It's difficult to keep track of all of Thomas' accolades. He became the fastest player in NFL history to reach 400 catches, doing so in just 56 games. His 407 receptions is the most in the first four seasons of any receiver's career in NFL history. And he's well ahead of pace (81 catches) to break the single-season reception record set by Marvin Harrison (143) in 2002. It's crazy to think what kind of numbers Thomas will put up over the next seven games with Drew Brees back under center.

The only reason Mahomes' stock has "fallen" recently is because he missed two games after dislocating his knee in Week 7. His 446 passing yards was the most in the NFL by a player coming off multiple missed games in a season, per Elias Sports Bureau data. And it was his third career game with 400 yards and three passing touchdowns -- more than Andrew Luck, Kurt Warner, Randall Cunningham, Joe Namath and George Blanda each had in their career -- according to ESPN Stats & Information research.

Garoppolo looked like a different quarterback after Emmanuel Sanders was injured early in the second quarter of the 49ers' loss to Seattle (a game in which Garoppolo was already without tight end George Kittle), and it brings into question just how far he can carry his team toward a Super Bowl. Overall, Garoppolo has been solid this season, and sometimes that's all a team needs to reach the championship round. But he could change the conversation with signature victories over the Ravens, Saints, Packers and/or Seahawks in the second half. 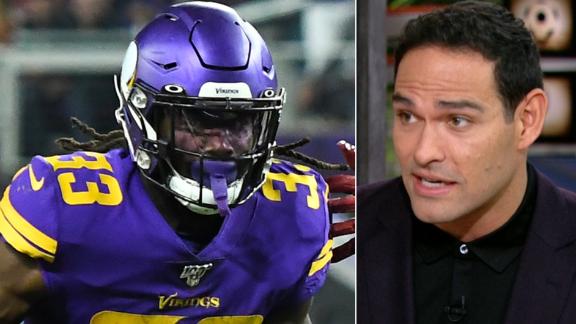 Sanchez: Cook is great, but not in MVP discussion
Mark Sanchez contends that Dalvin Cook is a great running back, but he won't put him in the same MVP conversation as Christian McCaffrey. 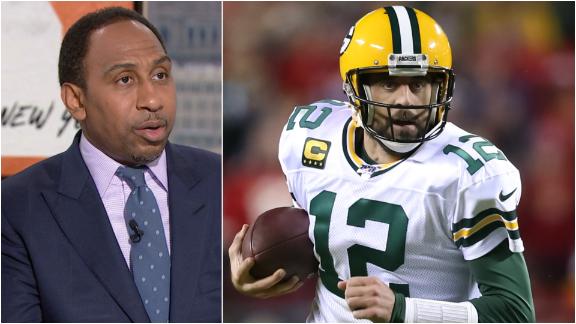