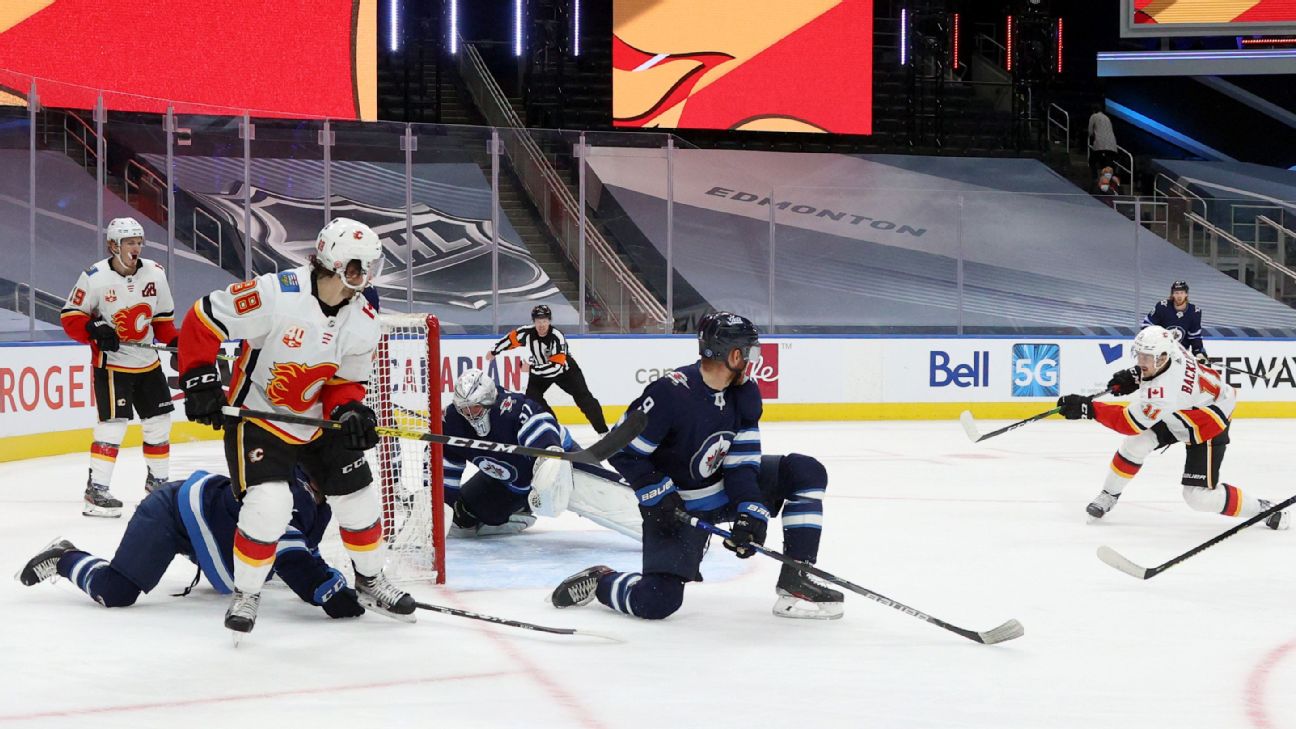 The Winnipeg Jets face elimination, while the Toronto Maple Leafs hope to roll on despite the loss of key defenseman Jake Muzzin.

And, oh yeah: The NHL's No. 12 seeds, Montreal and Chicago, have the No. 5 seeds on the brink. We told you this was going to be like March Madness!

With Tyler Toffoli injured, the Canucks reunited the "Lotto Line" of Brock Boeser, Elias Pettersson and J.T. Miller, and watched the trio help them even the series. Why the Lotto Line? The Canadian lottery game is 649; Boeser is No. 6, Pettersson is 40 and Miller is 9. Meanwhile, Vancouver faces more injury concerns, as forward Micheal Ferland left the bubble for medical treatment and will miss at least the rest of the series.

The Capitals (0-0-1) and Flyers (1-0-0) both still have a path to the top seed in the East. Brian Elliott will get the start in goal for Philly, and Joel Farabee should draw in at forward. Capitals center Lars Eller left the bubble and returned to Washington for the birth of his second child.

The Blues (0-1-0) will try to get their offense going against the Knights (1-0-0), who put five goals on the board against Dallas in their first round-robin game. "With Vegas right now, they're a very good rush team. Their 'D' are very active. They're hard to handle. They really come at you in waves from an offensive standpoint," Blues coach Craig Berube said.

The Blue Jackets made life too easy against Leafs goalie Frederik Andersen in Game 2, skating to a minus-6 in high-danger shot attempts. Those chances were even in Game 1. Columbus is convinced it can bounce back from a subpar effort in Game 2. "You can dissect it any way you want, but it ultimately just came down to [that] we didn't play a very good game," winger Nick Folignosaid.

As they go for the elimination, the Flames believe the Jets' injured players could return at any point. But coach Paul Maurice said it's up to the doctors whether Mark Scheifele, Patrik Laine, Mason Appletonor Mathieu Perreault will be available. "I think guys have stepped in and played really well. Nobody is feeling sorry for us and we're certainly not feeling sorry for ourselves," Jets center Cody Eakinsaid.

Question of the day: How will Toronto handle the loss of Jake Muzzin?

After the scary fall in Game 2 that sent Muzzin to the hospital, the Maple Leafs began life without the veteran defenseman in the lineup for the rest of this series. Travis Dermott will move up to skate with Justin Holl, Muzzin's usual partner. It's a familiar spot for Dermott, having played with Holl during the regular season when Muzzin was out with a broken hand. Replacing Muzzin on the roster will be Martin Marincin, who skated with Tyson Barrie in practice.

Calgary over Winnipeg in regulation (-110 from DraftKings). Even if the Jets get some players back for Game 4, the Flames have this series well in hand and aren't going to pass up a chance to close it out before overtime. In the Jets' past 19 games, only one has gone to overtime.

Florida shuffled its lineup, won the special-teams battle, got 20 saves from Sergei Bobrovsky and avoided elimination with its win over the Islanders. "It's a little bit of a missed opportunity for us to knock them out, but they're a good hockey team," New York coach Barry Trotz said. "We got away a little bit from our game, but we know we have to get back to our game." Full recap

The Predators entered the game having dominated in five of the six previous periods. In Game 3, they held a 62-45 shot attempt advantage at 5-on-5 and came at the Coyotes in waves. But Arizona got exactly what it needed to take the lead in the series: Darcy Kuemper shut the door with 39 saves, and their key offensive players,Taylor Hall (goal and an assist) and Conor Garland (goal), carried the scoring. Full recap

The Bruins had the best record in the NHL during the regular season. But this loss, their second of the round-robin, means they're mathematically unable to be the first or second seed in the East. "That part sucks. I'm not going to lie to you," coach Bruce Cassidy said. "But that's the situation this year with the stoppage in play. We knew the rules coming into it, that we would lose a bit of the advantage we gained." Tampa got the winner from Tyler Johnson with 1:27 remaining. The Lightning are in the driver's seat for the top seed after winning both of their first two games. Full recap

Like the Lightning, the Avalanche moved to 2-0. Like the Bruins, the Stars dropped to 0-2 in the round- robin. Pavel Francouz made 27 saves for the shutout, and Andre Burakovsky and Joonas Donskoi each had a goal and an assist. Colorado can clinch the first overall seed with a win over the Golden Knights on Saturday; if the Avs lose to Vegas and the Blues win their next two games, then St. Louis would reclaim the top seed with the points percentage tiebreaker. Full recap

The Penguins were cruising with a 3-1 lead in the second period, having rallied after Montreal's opening goal. But the Habs chiseled away with three even-strength goals: Jonathan Drouin at 10:13 of the second; Paul Byron at 15:50 of the second; and then a Jeff Petry shot that beat Matt Murray from a sharp angle at 5:33 of the third. Carey Price (30 saves) and the penalty kill did the rest. Jack Johnson was a minus-3. Sidney Crosby and Evgeni Malkin were limited to one assist each. Said Penguins coach Mike Sullivan: "It wasn't our best game tonight. It needed to be our best. I know we're capable of better. We've just got to bring it for Game 4." Full recap

Jonathan Toews had two goals and Corey Crawford made 25 saves as the Blackhawks moved to one win away from a huge upset against the Oilers. The dagger: The six power plays the Oilers handed Chicago, leaving the flow of the game disjointed. Full recap

He has faced 111 shots, tied for most in the postseason, and turned aside all but eight of them. In Game 3, he was the difference for the Coyotes. "You always have those goalies that you want to play for, but he's such a great guy, never blames his teammates," Coyotes coach Rick Tocchet said. "Those are the guys that you want to block shots for, play for. Kuemper is that type of guy. It was a terrific performance."

The Chicago captain scored two goals, including the winner at 18:44 of the third period, to lift the Blackhawks to victory and push the Oilers to the brink.

While he got some offensive help from his friends in Game 3, it was still the Price show. His 30 saves give Price a .937 save percentage and a 2.19 goals-against average.

"What's your question Portzy? God damn, you just keep on working me, don't you? I told you: I'm not interested in breaking down what's happened in the game. I've been very fair about that. I'm sorry you don't have information for your story, but that's how we're going to go about our business here." -- Blue Jackets coach John Tortorella to Aaron Portzline of The Athletic on Game 2 and looking ahead to Game 3.

Following up its "Tonight's attendance: Zero" graphic from the other night, the NHL continues to have a little fun with this whole "empty arena" thing.

Fit of the day

The Coyotes planned on wearing their kachina jerseys in games when they were designated as the home team in their series. Tocchet downplayed the idea that the switch gave the Coyotes their spark. We still think there's some magic in these jerseys. 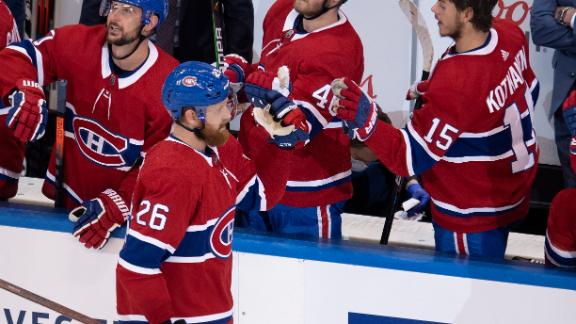 Petry nets game-winning goal for Canadiens
Jeff Petry scores a goal in the third period to give the Canadiens a 4-3 lead vs. the Penguins. 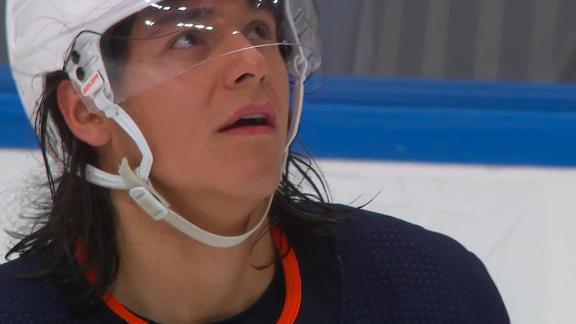