NHL Power Rankings: 1-31 poll, plus the most captivating U.S.-born player on every team 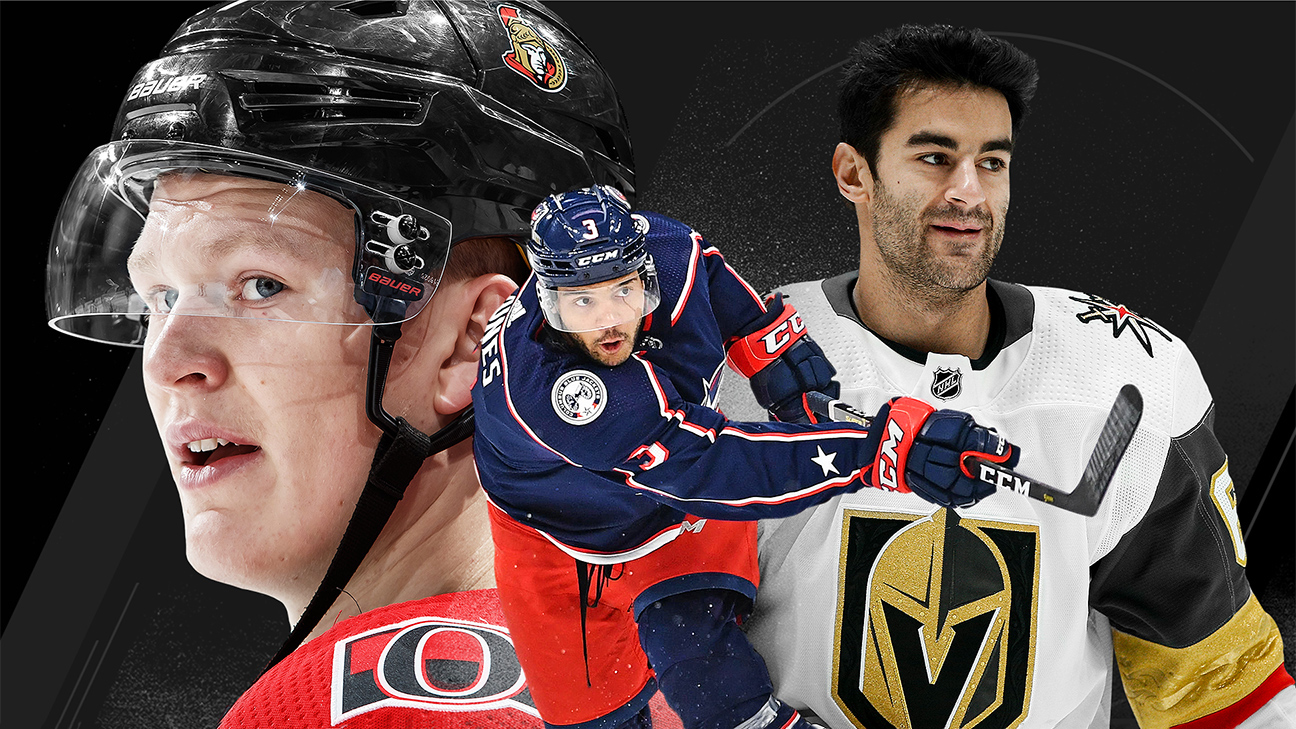 This week, we've taken a deep dive into Hockey Week in America. There was our attempt to identify the center of the U.S. hockey universe, a look at how Seattle is building a hockey town, a "future ranking" of the best U.S.-born players and a look at the enormity of the "Miracle on Ice" upset through a modern lens.

In this week's Power Rankings, we detail the U.S.-born player with the most captivating storyof the season for all 31 teams, and declare the best American player on every team.

How we rank: The ESPN hockey editorial staff submits selections ranking teams 1-31, and those results are tabulated to the list featured here. Teams are rated through Tuesday night's games, taking into account overall record, recent success and other factors such as injuries.

Note: Standings point pace is based on games through Feb. 19.

Blake Coleman (Plano, Texas). There was a lot of shock about Coleman's trade to Tampafor Nolan Foote and Vancouver's first-round pick, but he's an excellent penalty killer with some offensive pop and has one of the best contracts ($1.8 million, through next season) when compared to his output.

Charlie McAvoy (Long Beach, New York). OK, so a 3.4 shooting percentage isn't what you want out of a defenseman in his third NHL season. But the 22-year-old remains one of the best young defensemen in the game and a solid running mate for Zdeno Chara.

Jason Zucker (Newport Beach, California). Ho-hum. Traded before the coach gets fired and throws Minnesota into chaos, and subsequently ends up on Sidney Crosby's wing. Not a bad deal for the 28-year-old.

John Carlson (Natick, Massachusetts). The 30-year-old defenseman has already matched his career high in points (70) in only 59 games this season, and has the highest points-per-game average for a defenseman (1.19) since Ray Bourque's 1.26 in 1993-94. Just a remarkable season for the three-time Team USA representative.

Zach Sanford (Salem, Massachusetts). He was a part of the Kevin Shattenkirk trade, and wasn't the primary piece -- that would be the first-rounder they eventually flipped to Philly for Brayden Schenn. But we know Sanford now: After four points in eight games in the Blues' Stanley Cup run, he has career highs in goals (13) and assists (13) through 46 games for St. Louis this season. (Scoring four goals in one game against Vegas helped.)

Joe Pavelski (Plover, Wisconsin). One of only three Americans on the Stars this season, Pavelski is second to only Patrick Kane (50) in playoff goals scored by an American over the past 20 years.

Erik Johnson (Bloomington, Minnesota). The 31-year-old has represented the U.S. in seven different international tournaments, including the 2010 Olympics and the 2016 World Cup of Hockey. And he has a rock-ribbed, All-American nickname: "The Condor."

Sean Couturier (Phoenix). Couturier was born in the desert but grew up in Canada, and hence has played for the Canadian national team. "For me, I'm dual citizenship, so that's the way I see it," Couturier said in 2016. Not for nothing, dude, but Team USA sure could use a shutdown center against Sidney Crosby and Connor McDavid.

Andy Greene (Trenton, Michigan). After 923 games with the Devils, the 37-year-old defenseman accepted a trade to the Islanders, reuniting him with the general manager who signed him as an undrafted free agent in 2006, Lou Lamoriello (a native of Johnston, Rhode Island).

Jaccob Slavin (Denver). The 25-year-old "defensive defenseman" is on pace for his best scoring season, and remains one of the league's analytics darlings: His 14.4 goals scored above average ranks sixth among NHL defensemen.

Nick Foligno (Buffalo, New York). The veteran winger is having a rough campaign, with a 0.41 points-per-game average through 58 contests. If he doesn't improve, that would be his lowest rate in a non-lockout season since 2010-11.

Max Pacioretty (New Canaan, Connecticut). The winger recently told me about the youth team he played for, which was pretty loaded. "We just played for my local team growing up. A team that included myself, Kevin Shattenkirk, Cam Atkinson, Mark Arcobello;Jonathan Quick played on the older team ... that was just a local team. Went to the rink, put your name on a piece of paper, went out there and had fun. Now I go back and see all these kids that are Div. I commitments and first-round draft picks. I think last year there were two kids that were top 15 [in the nation] from my local youth team."

Kailer Yamamoto (Spokane, Washington). A Spokane native who played for the Spokane Chiefs. It doesn't get more Spokane than that. Unless he also played in Hoopfest.

Auston Matthews (San Ramon, California). He grew up in Arizona as a Coyotes fan, and is having his best goal-scoring season in the NHL. His 43rd goal of the season on Tuesday broke a tie with Ed Olczyk (1987-88) for the second-most goals by a Maple Leafs player in their age-22 season or younger; only Rick Vaive in 1981-82 had more (54).

Johnny Gaudreau (Salem, New Jersey). After a real struggle in the first two months of the season, Johnny Hockey has 19 points in his past 19 games for the offensively resurgent Flames.

Phil Kessel (Madison, Wisconsin). Checking in on our sweet Phil, he has 13 goals and 22 assists in 62 games, remaining one of the most durable players in the NHL with a consecutive games streak of 832. Also, no one has worn the Kachina sweater better.

Connor Hellebuyck (Commerce, Michigan). The 26-year-old goaltender continues his push for the Vezina Trophy, with a 19.7 goals saved above average mark for a Jets team that would be nowhere without him this season.

Nick Bonino (Hartford, Connecticut). OK, we all knew the goal scoring was going to level off for the center. He had 10 in his first 26 games. He scored seven in his next 33 games.

Adam Fox (Jericho, New York). In any other rookie crop, Fox would be among the top contenders for the Calder Trophy. His 11.8 goals scored above average rank him second on the Rangers, behind Artemi Panarin.

Jeff Petry (Ann Arbor, Michigan). A solid defenseman who provides steady D with surprising offensive upside -- 175 points in 376 games for the Habs. It's no wonder he's coveted at the trade deadline.

Patrick Kane (Buffalo, New York). John Buccigross took a trip to the year 2040 and discovered that Kane is regarded as the best American-born player of all time.

Zach Parise (Minneapolis). The Wild have 10 American players, but we'll put the spotlight on Parise here. He passed 1,000 games in the NHL for his career, but alas last season's offensive uptick (61 points in 74 games) has ticked back down a bit (36 points through 58 games).

Jack Eichel (North Chelmsford, Massachusetts). The Sabres star has 74 points in 59 games, and yet this will (most likely) be his fifth NHL season that ends without a playoff berth. We're getting close to "send in Seal Team 6 to rescue this guy" territory.

John Gibson (Pittsburgh). Gibson, 26, is having his roughest season as an NHL starter. For the first time since taking the Anaheim crease in 2016-17, Gibson has a negative goals saved above average mark (minus-6.27).

Kevin Labanc (New York). The Brooklyn native famously signed a one-year, $1 million deal with the Sharks to bail out their salary cap this season. The gamble ... didn't totally work. His 0.53 points per game matches his 2017-18 level, but is below his 0.68 points per game of last season.

Kyle Palmieri(Smithtown, New York). Will the 29-year-old winger move at the trade deadline? Or will the Devils keep him around for the last year of his contract soNico HischierandJack Hugheshave someone to pass the puck to next season?

Brady Tkachuk (Scottsdale, Arizona). The 20-year-old Sens forward's sophomore season is ... just as good as his freshman season, with an identical 0.63 points-per-game average.

Jonathan Quick (Milford, Connecticut). Say what you will about the 34-year-old goaltender's current NHL value -- and he's around a minus-43 in goals saved above average for the past two seasons combined -- he was the goalie who won the "T.J. Sochi" game in Russia, and that's always going to be good enough for us.

Jimmy Howard (Syracuse, New York). The 35-year-old goalie is 2-22-2 this season, with a minus-18.33 goals saved above average. Remember the better times, everyone. 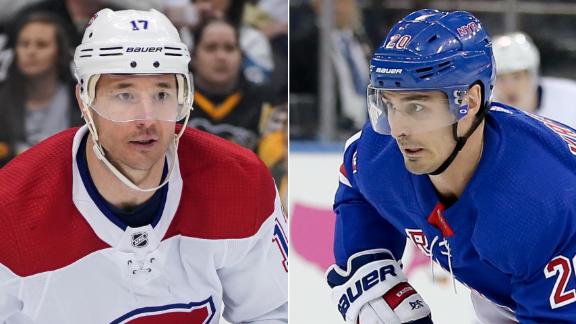