No. 2 Virginia pulls closer to top-ranked Villanova in Top 25 poll 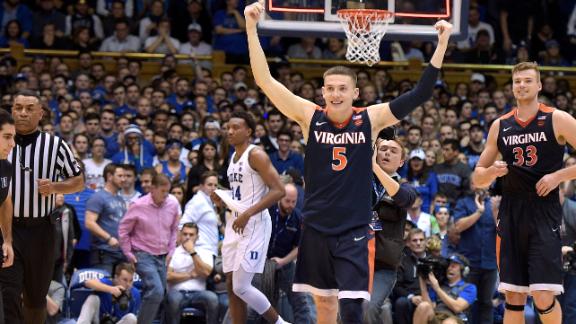 Virginia has not been ranked No. 1 since Ralph Sampson patrolled the lane in Charlottesville.

The Cavaliers took a step toward their first top ranking in 35 years on Monday, earning 17 of 65 first-place votes from a media panel following victories over No. 18 Clemson and No. 4 Duke.

Villanova remained at No. 1 for the fourth straight week, receiving 47 first-place votes after a pair of victories last week.

Purdue had one first-place vote and remained at No. 3, Duke did not fall back despite its loss to Virginia, and Michigan State moved up a spot to round out the top 5.

The Cavaliers (20-1, 9-0) annually have one of the nation's top defenses under coach Tony Bennett, and this season has been no different.

Virginia is first nationally in scoring defense at 52.1 points allowed per game and is third in field goal percentage against, holding opponents to 37 percent.

The Cavaliers lead the ACC by 2 games and are off to their best conference start since the Sampson-led 1980-81 team won its first 12 games. Virginia has not been ranked No. 1 since 1981-82, a team also centered by Sampson.

"There's talent, and I don't think our players sometimes get enough credit for their talent," Bennett said. "But there is a synergy or a chemistry that when they're right, it's even better."

Virginia hosts Louisville on Wednesday and plays at Syracuse on Saturday.

Purdue has won a school-record 17 straight games since suffering its lone loss, to Tennessee in the Bahamas on Nov. 22. The Boilermakers have set another school mark with 12 straight Big Ten victories and joins Virginia as the only power-five schools still unbeaten in league play.

North Carolina's national title defense has hit some bumps in the road.

The rough week cost the Tar Heels in this week's poll. They had the week's biggest drop, falling nine spots, to No. 19.

Kentucky fell out of the poll for the first time in nearly four years last week after losses to South Carolina and Florida.

The Wildcats (16-5, 5-3 SEC) moved back into the poll at No. 21 this week following victories over Mississippi State and No. 7 West Virginia in the Big 12/SEC Challenge. Kentucky faces Vanderbilt and Missouri this week.

West Virginia's loss to Kentucky wasn't its only setback last week, and it cost the Mountaineers.

West Virginia (16-5, 5-3 Big 12) fell eight spots in this week's poll to No. 15 after dropping games to the Wildcats and TCU. The Mountaineers are in a four-way tie for second in the Big 12 with No. 10 Texas Tech, No. 12 Oklahoma and Kansas State, a game behind Kansas.

Nevada was the only team to drop out this week, falling from No. 23 after losing to Wyoming in double overtime.