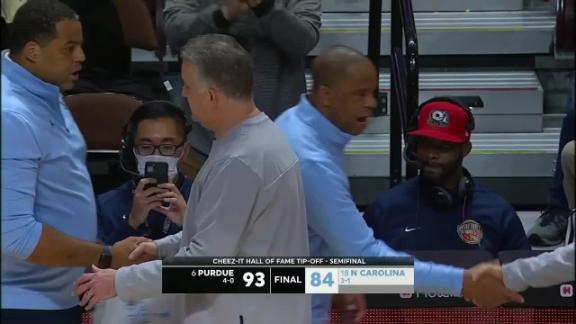 UNCASVILLE, Conn. -- - No. 6 Purdue showed that its high-scoring offense works, no matter the level of competition.

Sasha Stefanovic scored 23 points and Jaden Ivey put up 22 points to go along with his 10 rebounds as the Boilermakers beat No. 18 North Carolina 93-84 Saturday in the first round of the Hall of Fame Tip-Off tournament.


Trevion Williams added 20 points for Purdue (4-0), which has scored at least 90 points in all four of its games this season.

"I don't think we can average 90 points," Purdue coach Matt Painter said. "A lot of people across the country that have players, their offense is better than their defense right now. We're one of those teams."

Dawson Garcia hit 10 of his 13 shots and led North Carolina (3-1) with 26 points before fouling out. R.J. Davis and Caleb Love each added 18 points for the Tar Heels.

Purdue led 41-35 at the half and by eight points early in the second half before the Tar Heels went on a run. A 3-pointer by Davis made it 60-59 and Garcia gave UNC its only lead of the game with a long 3-pointer from the left wing to make it 65-64 with about nine minutes left.

Hubert Davis, who lost for the first time as North Carolina's coach, said there was a lot his team can take from the game.


"Their toughness, their will and their want-to in the second half I thought was really good. It wasn't good enough," he said. "But I was proud of that and I told them that this is a great opportunity for us to learn."

It was the first game between the two programs since November 1999. North Carolina had won eight straight games in the series dating back to the 1970s.

North Carolina: Armando Bacot, who scored 22 and 24 points in the Tar Heels' last two games, had trouble getting over and around Purdue's big men. He finished with just two points in 17 minutes before fouling out.

Purdue: The Boilermakers shot 56% from the floor and made 10 of their 23 attempts from behind the arc.

"To be consistent and advance in the tournament or win a championship in our league, you're going to have to be a good defensive team," Painter said. "We're not going to be able to outscore everybody. The ball doesn't go in like that."

Purdue is looking for its first in-season tournament title since November 2016, when it won in Cancun.

The teams combined for 36 fouls, but UNC did not go to the line in the first half - the first time that has happened in seven years. The Tar Heels were 10 of 12 in foul shots in the second half.

Former Tar Heels coach Roy Williams was in the crowd and got a huge ovation from North Carolina fans who made the trip north when he was shown on the scoreboard in the first half.