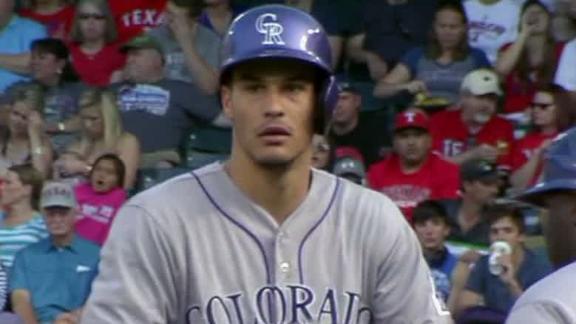 ARLINGTON, Texas -- Colorado Rockies third baseman Nolan Arenado has tied the team record with a 27-game hitting streak in a 9-2 win over the Texas Rangers.

Arenado needed little time to extend his string Wednesday night. He hit a two-run double in the first inning against the Rangers to equal teammate Michael Cuddyer's 27-game streak from last season.

Arenado's streak is the longest for anyone 23 years or younger since Albert Pujols had a 30-gamer in 2003 when he was 23.

The streak for Arenado began April 9, a week before his 23rd birthday. According to Elias, his streak is the longest that began when a player was 22 or younger since Benito Santiago's 34-game hitting streak in 1987, which is still a major league rookie record.