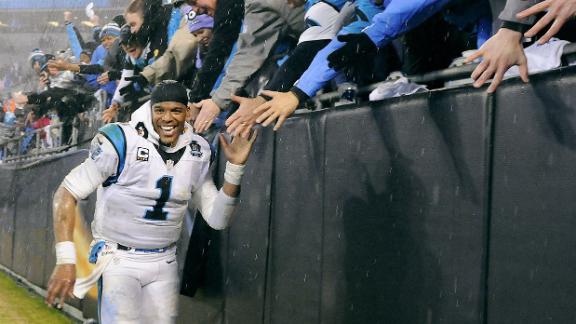 The Carolina Panthers won't be bargain shopping in free agency like they were forced to a year ago due to a tight salary cap.

"Last year we were shopping at the dollar store," general manager Dave Gettleman said Tuesday during his season-ending news conference. "This year, we might be able to move up in class a little bit."

Asked if that might be at a Nordstrom level, Gettleman laughed.

"I don't go shopping, so where's Nordstrom on the scale?" he said. "We're not going to Tiffany's, I'll tell you that."

Gettleman said the Panthers, whose roller-coaster season ended with a 31-17 loss to the defending Super Bowl champion Seattle Seahawks in Saturday's NFC divisional playoff game, are in much better shape under the salary cap entering this offseason.

According to ESPN's Roster Management, Carolina is $9,660,153 under the cap. That could grow by at least $5 million, depending on personnel decisions and where the 2015 cap number is set.

A year ago, the Panthers released all-time leading receiver Steve Smith and then lost three other receivers and half of the starting secondary to free agency due to salary-cap restrictions.

Gettleman wouldn't get into specifics on the contractual situation of players on the current roster, specifically quarterback Cam Newton, running back DeAngelo Williams and defensive end Greg Hardy.

Newton is entering the option year of his rookie deal. While Gettleman wouldn't speak to when he would like to have a new deal with the first pick of the 2011 draft, he said Newton remained Carolina's franchise quarterback.

Williams, 31, also is entering the final year of his deal. Because of his age and the emergence of Jonathan Stewart as the lead back during a 5-1 finish, there has been speculation that the Panthers might release Williams, which would free up $2 million under the cap.

Williams played only six games due to injuries in a season that began with him dealing with the loss of his mother to breast cancer.

"I need to talk to DeAngelo," Gettleman said. "I really do. He's a pro's pro, and he had a tough season. Obviously, the loss of his mom was very, very difficult. He only played six games. It was tough for him.

Hardy, Carolina's 2013 sack leader, didn't play after the opener. He was placed on the inactive list for the second game and then the NFL commissioner's exempt list before the third game with the understanding he would remain there until his domestic violence case is resolved.

He received $13.1 million this season that he was guaranteed when the Panthers put the franchise tag on him in February. Gettleman said the tag was used because Carolina already was faced with rebuilding the secondary and he felt it was "extremely important to keep the front [seven] together."

"That's why we made the decision to franchise Greg," Gettleman said. "Obviously, it blew up."

In all, the Panthers started seven rookies down the stretch, which Rivera said will make spending big bucks on free agents less urgent than it seemed when Carolina was 3-8-1.

"I think we can take a big step and put ourselves in position to win a Super Bowl," Rivera said.