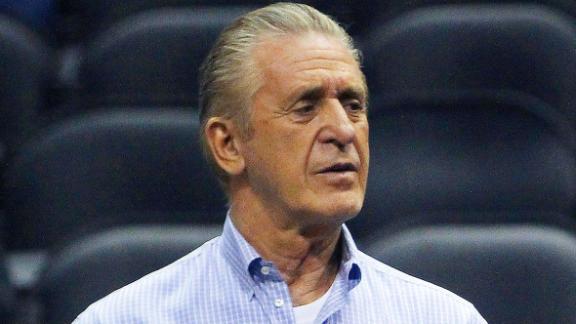 MIAMI -- Heat president Pat Riley insists his franchise has recovered well from LeBron James' stunning return to Cleveland in free agency, but admits that it remains a difficult blow to accept.

"I went into it with the notion he was coming back, so I was selling that to players," Riley said Wednesday. "I let him know that. He never said, 'Don't do that.' "

Addressing questions from reporters for the first time since James opted to return to the Cleveland Cavaliers after four successful seasons in Miami, Riley reiterated throughout a 40-minute conference call that he's confident the Heat will remain a top competitor in the East without the four-time league MVP.

James led the Heat to four consecutive trips to the NBA Finals and championships in 2012 and 2013, but decided to walk away after Miami suffered a lopsided loss to San Antonio in five games during the Finals last month. Riley said he expected James to return to Miami after James, Chris Bosh and Dwyane Wade all opted out of the final two years of their contracts to enter free agency.

At the same time, Riley said he never felt he was misled by James during the free-agency process but also suggested he was never discouraged by James or his representatives in the days leading to James announcing in a Sports Illustrated essay that he was going back to Cleveland.

James signed a two-year contract worth $42 million with the Cavaliers, a deal that gives him the option to enter free agency again after next season. It was essentially the same contract terms he had remaining on his deal with the Heat.

The Heat are scheduled to face James and the Cavaliers for the first time in a Oct. 11 preseason game in Brazil as part of the NBA Global Games.

Prior to Wednesday, Riley and Heat owner Micky Arison had only addressed James' departure and the team's plans to move forward in prepared statements that were released by the team or through social media. Riley spoke with reporters Wednesday after the team officially re-signed Bosh to a five-year, $118 million contract that positions him as James' replacement as the anchor of the franchise.

Bosh agreed in principle to the five-year, $118 million contract on July 11, just hours after James informed Miami he was headed to Cleveland. But the Heat officially announced the deal Wednesday after Bosh returned from a month of international travel that included stops in Africa and Europe.

Riley moved quickly to regroup after James' stunning departure by securing agreements to retain the two other members of the Heat's Big Three in Bosh and Wade, who signed a two-year, $31 million deal two weeks ago. Those deals were part of a flurry of moves by the Heat that totaled about $215 million in free-agency spending and included the additions of Luol Deng, Josh McRoberts, Danny Granger as well as the bringing back of Mario Chalmers, Udonis Haslem and Chris Andersen.

"No doubt we lost a great player," Riley said of losing James. "I don't get hurt. ... The hurt didn't last long. We picked up the phone and went to work. Sometimes, things happen that you don't like, but you have to move on. I feel really good about where we are right now at this moment. I feel we are up to the challenge and will be as competitive as anyone in the Eastern Conference."

Riley addressed several questions about what transpired in the initial days of free agency, from the moment James opted out of his Heat contract leading to the final face-to-face meeting between Riley and James on July 9 in Las Vegas. James had met with Cleveland owner Dan Gilbert in Miami days earlier, but Riley suggested he still didn't get the impression James had reached a decision from their conference.

Riley scoffed at the notion that he may have offended James shortly after the Finals with a series of strong and challenging comments he made to reporters after his exit interviews with Heat players. Riley opened that news conference last month saying he was frustrated and implored his players, without naming names, to have the guts to avoid walking away at the first sign of adversity.

Riley said Wednesday he was speaking out of frustration from an embarrassing performance in the Finals against the Spurs and did not direct those comments specifically at James. Riley denied that he had any indication or feeling at that time that James may have been thinking about leaving.

"My message that day was borne out of just getting beat against a great team by a total of 70 points in five games," Riley said. "We got our (expletives) handed to us. I was upset, and you should get upset. That's sort of how I reacted. It wasn't about making any direct comment to one player because everybody on our team was a free agent at that time, or about ready to become free agents."

During an interview with ESPN.com after agreeing to his deal earlier this month, Bosh said he was initially surprised by James' decision to leave after their success in Miami. But he also said he's confident with the Heat's moves this offseason and believed the team will continue to contend.

"That will never change," Bosh said of his time with James the past four years. "As you move forward, you appreciate those moments and keep going forward."

After four years of success, Riley said a potential dynasty in Miami ended prematurely. But he looks forward to putting together another dominant roster in 2016 when several marquee players, including Kevin Durant, are set to become free agents. Bosh and McRoberts are the only players the Heat have under guaranteed contracts beyond the next two seasons.

Asked if he was ready to make another big free-agency splash in two years, Riley, 69, answered "yes."

"It's fired me up," Riley said of dealing with the emotional highs and lows of the past month. "I don't like to get beat in anything.

"This process didn't take anything out of me. That chain has been broken prematurely, but we're going to try to make it a generational (team) again. We were always looking at 2016 to be a (major) player (in free agency)."