Paul George: 'A lot of pressure' 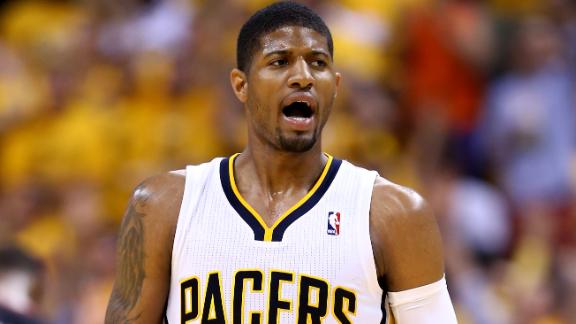 LAS VEGAS -- It seemed like July was a bit of a bad month for the Indiana Pacers, with Lance Stephenson bolting to Charlotte after what seemed like an unnecessary contract dispute and LeBron James signing with a division rival.

Or maybe that's how the Pacers want people to see it.

The Pacers made last season rather fascinating with their rapid rise and fall that was centered around sometimes unpredictable events and odd bouts of chemistry problems.

But there was a core issue that no one associated with the team will deny: The Pacers struggled with life at the top of the standings after years of being the underdogs. And already, they seem to prefer to return to the more comfortable role.

"With Lance being gone and everyone thinking this is going to be a rebuilding year for us," Paul George said during Team USA training camp this week, "immediately when LeBron went to Cleveland, that made them the front-runners."

Which team will be the front-runner in the East is yet to be determined, depending on the Cavs' ability to finish a Kevin Love trade, how the Chicago Bulls' offseason additions come together and how the new-look Miami Heat roster works out. Also, by the way, James' repositioning broke up the team that put the Pacers out of the playoffs each of the last three years.

But the Pacers, with a strong core led by George still in place, are certainly not rebuilding, right?

"People do look at it that way," George insisted, perhaps even trying to sell it. "I've got a lot of pressure and I'm coming into this year and I'm ready to live up to that pressure."

There's something else George may be trying to sell this summer. Generally, George was always a public supporter of Stephenson; they came into the league together in 2010 and grew together over the past four years. They kept in touch throughout Stephenson's free-agency process, which ended with him taking a three-year, $27 million deal with the Hornets over Indiana's five-year, $44 million offer.

"Obviously, I wanted him to come back, we gained so much chemistry together," George said. "But I didn't want to make the decision for him."

But how much did George and the rest of his teammates truly want Stephenson back? Frequently, Stephenson was the Pacers' best player, and there is no denying his talent. Team president Larry Bird said publicly and strongly several times he wanted to keep Stephenson, though the way the Pacers were so ironclad in their position even after Charlotte offered a relatively miniscule increase in annual salary made Bird's stance on the matter seem a little questionable.

Frankly, many of the team's internal frustrations over the second half of the season could be traced back to Stephenson in one way or another. Though he was fearless defensively and endlessly aggressive, his penchant for "free-Lancing" offensively was a constant irritation to his teammates, as were his frequent on-court antics and off-court commentary that led to distractions.

So, on one hand, George says losing Stephenson creates a sense of rebuilding and he wanted him back. But on the other, he self-evaluates his second-half struggles like this: "I was trying to get other guys going and get other guys in the groove. I was trying to find mine; a lot of times I was just hung out to dry."

Stuckey is no Stephenson -- the fact that the Pacers got him on a one-year minimum contract three weeks into July says enough about that. But George's references to Stuckey being a "system guy" are not fluff. Stephenson's bouts of ball-hoggery and periods of blatant stat-chasing were not part of the Pacers' system. Stephenson occasionally won them some games because he was impervious to some of the outside influences that weighed the team down, but it came at a cost.

George truly does seem to regard Stephenson as a friend to this day, and he's not totally looking to shed blame for not achieving the Pacers' goal of reaching the Finals. His offseason workouts have been focused on playing closer to the basket and learning to create space by improving his footwork, techniques that need to be added to his game.

And while he seems to talk in code a bit about what Stephenson's departure means, he is not looking to shed any responsibility.

"The eyes are on me this year," George said. "I've got a lot of pressure and I'm coming into this year ready to live up to that pressure."