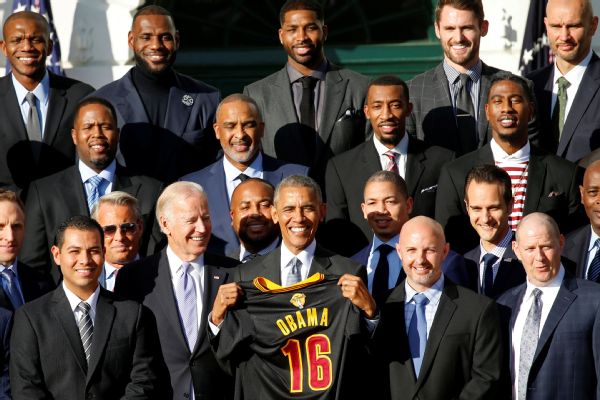 WASHINGTON -- President Barack Obama started Thursday by welcoming the future, meeting with president-elect Donald Trump at the White House for the first time.

Obama finished the day by celebrating the past, recognizing the Cavaliers for their 2016 NBA championship over the Warriors.

"Give it up for the world champion Cleveland Cavaliers!" Obama bellowed to a crowd of more than 100 people, including Ohio Gov. John Kasich, on the White House's South Lawn. "That's right, I said 'world champion' and 'Cleveland' in the same sentence. That's what we're talking about when we talk about hope and change."

It was the first of many jokes the exiting president cracked in what was his eighth and final ceremony with the reigning NBA champion, becoming the first commander-in-chief to do so in every year of his presidency since Ronald Reagan.

The levity was welcome for a Cavs group reeling as the election unfolded earlier in the week, namely LeBron James, who was one of Democratic nominee Hillary Clinton's most vocal supporters.

Before marveling at James' skills, Obama roasted the four-time MVP for his cryptic tweets during the 2015-16 season that set off a firestorm of speculation in the media. Obama also playfully jabbed at Richard Jefferson and Dahntay Jones for their old age,Iman Shumpert for his old flat-top hairdo, Kevin Love for his surprising defense on Warriors star Stephen Curry in Game 7 of the Finals, and, of course, Obama said he "want[ed] to give a special thanks to J.R. Smith's shirt for showing up."

Love presented the president with a black-sleeved alternative Cavs jersey with "Obama" and the No. 16 stitched on its back. Obama had a quip ready yet again, alluding to how James ripped the sleeves open on his black jersey the first time Cleveland wore those uniforms.

"These sleeves get tight," Obama said. "Can I tear these out? Can I rip them?"

Before all of the fun outside, the Cavs were given a private tour of the White House and spent time with Obama and First Lady Michelle Obama.

"The day's been amazing," Cavs coach Tyronn Lue said. "I mean, it ranks right up with winning a championship for me. Get a chance to come to the White House, meet the President of the United States, meet the First Lady. Having our team here, whole organization. I mean, this is a great moment and I'm very honored, very humbled by the whole day."

The Cavs also met with Attorney General Loretta Lynch and senior adviser Valerie Jarrett in the Roosevelt Room to brainstorm ways in which law enforcement can strengthen its relationship within local communities.

"I know in the community policing discussion, it was something where the White House side was really impressed with what our guys had to contribute," Cavs general manager David Griffin said. "We've got (a) really thoughtful, socially aware group of guys that really have deep-seeded feelings about all of this, so it's fun to be able to be here with them. You learn something from our group every day, which is special."

Griffin said constructive dialogue was consistent with the personality of his team. After some NBA teams were following San Francisco 49ers quarterback Colin Kaepernick's lead and organizing demonstrations during the national anthem to protest how minorities are being treated in the United States, the Cavs sought to figure out ways in which they could enact social change rather than just bring attention to injustice.

Griffin expects a similar response in dealing with some people's disappointment in Clinton's defeat.

"I mean, the reason we're here today is that we proved we deal with adversity really well," the GM said, referring to the Cavs' comeback from a 3-1 deficit in the Finals to beat a Warriors team that won a record 73 games in the regular season. "And I think our nation does the same thing really well. ... You have a right to place your vote and to cast your vote and state your opinions. And once that happens, we have to come together and we have to find a way to fight through that adversity. And I know our players know how to do that. I think it's when our country is at its best as well, so I think everyone will get in line and do that."

While the Cavs ventured all over the White House grounds, at one point greeting a group of military veterans at the outdoor basketball court, they did not cross paths with president-elect Trump, according to Griffin. In fact, Trump did not come up in any discussions between the team and Obama, or with Lynch and Jarrett.

On Wednesday, Jefferson joked via Snapchat that the annual tradition of the NBA champion visiting the White House would cease to exist because of the league's distaste for Trump, writing, "Words cannot express the honor I feel being the last team to visit the White House tomorrow."

However, Lue said if the Cavs were to win back-to-back titles -- as Kasich predicted earlier Thursday -- they would gladly return for another ceremony under Trump.

"We have a long season to play, and if we were able to win, I would love to come back," Lue said. "So let's hope we win and we'll see."

Despite the charged atmosphere -- there were snipers on the roof of the White House and packs of protesters along Pennsylvania Avenue all afternoon -- the day had a cool, comfortable feel for the Cavs, which was reflective of the Obama administration as a whole. Players posed for photos on their cell phones as they stood on the dais, while Obama and Vice President Joe Biden acknowledged them and even snapped selfies with the first lady.

Obama dubbed James "one of the great players of all time," but the president also represented perhaps the greatest player of all time, Michael Jordan, and his beloved Chicago Bulls.

"By knocking off the Warriors, the [Cavs] cemented the 1996 Bulls as the greatest team of all time," Obama said. "So your president thanks you for that." 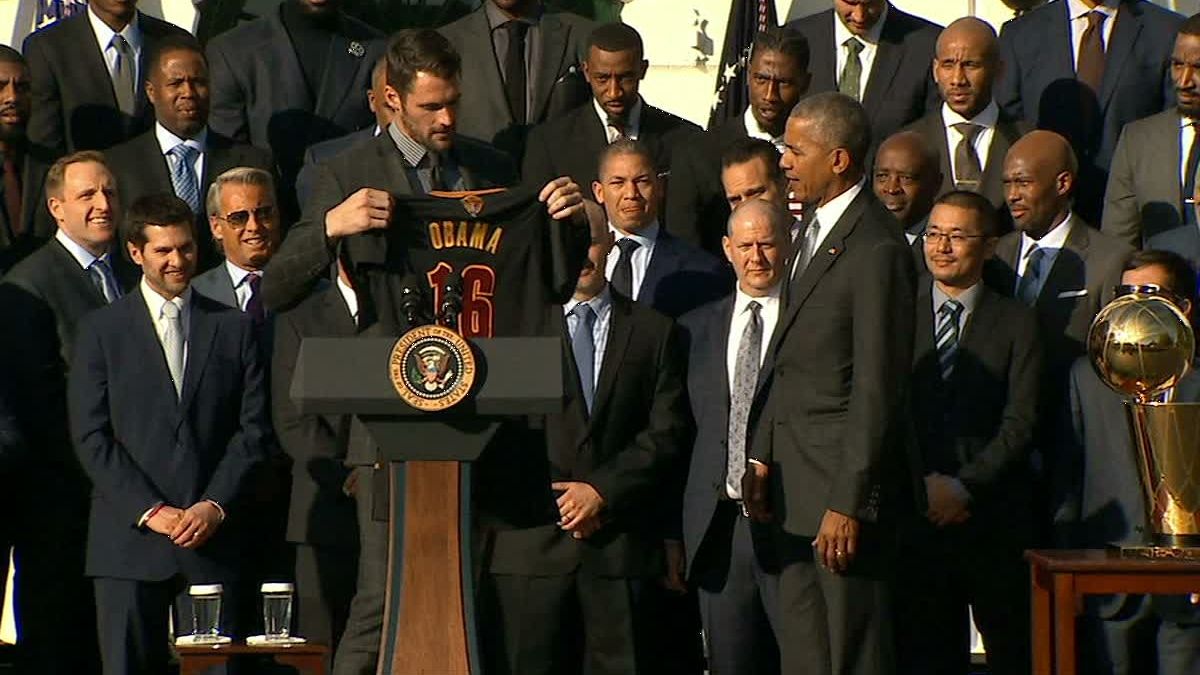 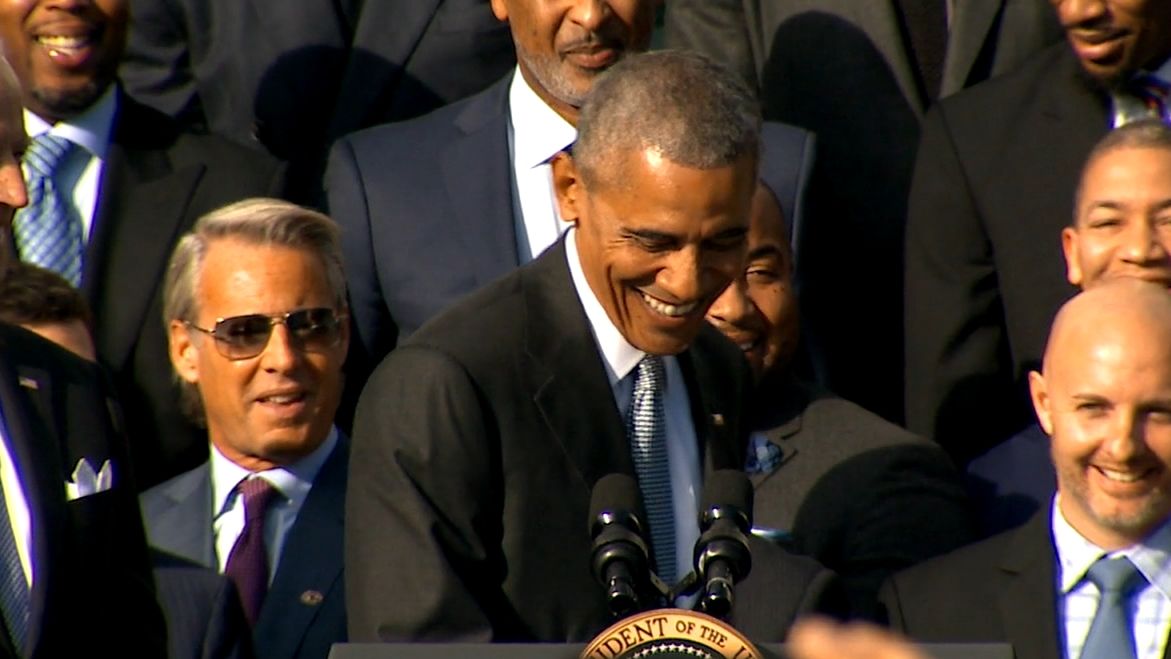