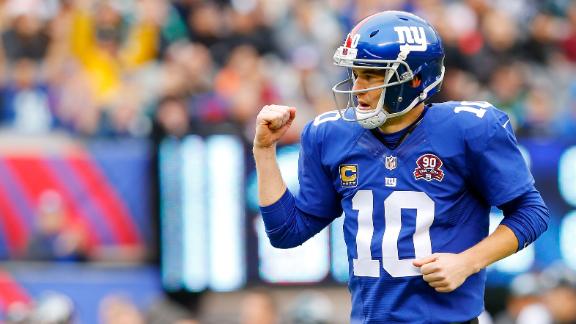 Quarterback Eli Manning, who is engaged in contract extension talks with the New York Giants, is seeking to become the NFL's highest-paid player with his next contract, the NFL Network is reporting.

Giants owner John Mara has said that he hopes to have his franchise quarterback signed by the start of the season or soon after, but the NFL Network reports a "significant gap" remains between the team and Manning in negotiations.

Manning, whose contract expires after this season, is scheduled to make $17 million in base salary this season. Aaron Rodgers' deal, which he signed two years ago, tops the market with an average annual value of $22 million.

In the unlikely event Manning and the Giants don't come to terms on a new deal, the team could use its exclusive franchise tag on Manning. That designation would pay Manning a 2016 salary of $25 million -- $3 million more than Rodgers' average annual value.

Several quarterbacks have agreed to new contracts this offseason, but none have surpassed the average annual value of Rodgers' contract. The Seattle Seahawks' Russell Wilson averages $21.9 million with his new contract; the Pittsburgh Steelers' Ben Roethlisberger averages $21.85 million with his new deal; and the San Diego Chargers' Philip Rivers and the Carolina Panthers' Cam Newton are at $20.81 million and $20.76 million, respectively, after their extensions.

Manning, who has led the Giants to two Super Bowl titles, signed a six-year, $97.5 million extension in 2009.