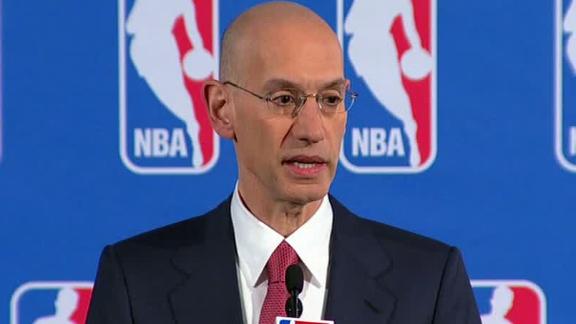 ESPN
After conducting a formal review, the NBA has alleged that Los Angeles Clippers owner Donald Sterling and his management team attempted to mislead the league during its investigation of racist remarks he made on a recording published by TMZ, according to a report obtained by the Los Angeles Times on Tuesday.

Sterling's actions were among several allegations the NBA made against the banned owner as well as Clippers management in the 30-page report, as detailed by the Times.

• Sterling tried to get V. Stiviano to lie about the authenticity of the recording and tell investigators that she had altered the audio of the TMZ tape. Stiviano was the person Sterling made the racist comments to on the tape, in which he voices unhappiness with her for posting online photos of herself with black people, including Hall of Famer Magic Johnson.

• On April 9, more than two weeks before it became public, the Clippers received a copy of the recording. Team president Andy Roeser discussed it with Sterling, then instructed an employee to destroy the copy. Roeser is currently on an indefinite leave of absence.

• Sterling and his wife, Shelly, are not estranged, as she has said. "Significant evidence exists in the public record and otherwise that Mr. and Mrs. Sterling are not in any sense estranged," the report says, according to the Times, adding that they are "inextricably intertwined" despite their claims. The report details how the two attended most Clippers home games this season, were spotted together at the All-Star Game in New Orleans and spent two days together immediately after the controversial recording went public.

In a statement released Wednesday, Shelly Sterling's lawyer, Pierce O'Donnell, said his client "continues to be unfairly tarnished by the words and actions of her co-owner and estranged husband" and that "certain assertions made about Shelly in the NBA charging document against Donald Sterling are untrue and lack context."

According to the Times, the 80-year-old Sterling was shown the 30-page report and other evidence by the NBA on Monday. He did not respond to a request for comments by the newspaper.

Also Monday, the NBA charged Sterling with damaging the league with his racist comments and set a hearing for June 3.

Sterling has until Tuesday to respond to the charge, and he has the right to appear at the hearing and make a presentation in front of the league's board of governors. If Sterling does not respond by Tuesday, that would be grounds for termination as owner.

He has asked for a three-month delay in the hearing, sources told ESPN.com. NBA commissioner Adam Silver said the timeline will not be extended.

Information from ESPNLosAngeles.com's Dave McMenamin was used in this report.