Ronda Rousey has a message for fans on Instagram: 'I'll be back' 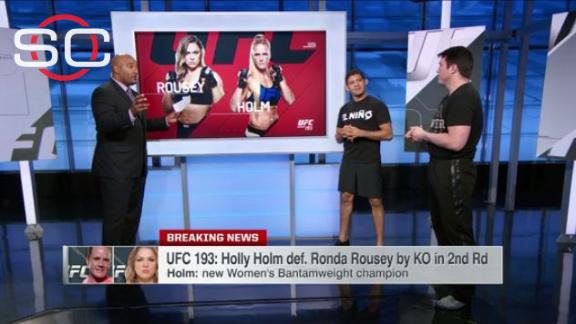 A day after being stunned by Holly Holm at UFC 193 in one of the sport's biggest upsets, Ronda Rousey used Instagram to reach out to fans for the first time since she was hospitalized after being knocked out in her first career MMA loss.

Rousey, a former judo Olympian, was unbeaten through 12 UFC fights before she met Holm. A win Saturday would have been Rousey's seventh title defense. Instead, Holm, a 34-year-old veteran boxer from Albuquerque, New Mexico, has the championship belt.

After the loss, Rousey skipped the post-fight media conference and was taken to a nearby hospital for precautionary reasons. She received stitches for facial cuts and had plastic surgery on her lip, according to ESPN's Ramona Shelburne.

"Ronda has lost before, she lost at the Olympic games," Dolce said. "That was a great test for her, and look at how she came back, she came back a multi-time world champion."

Dolce said tests at the hospital ruled out a concussion for Rousey.

"She was transported (to hospital) because she got knocked out," UFC chief Dana White said in the wake of the bout. "She's completely bummed out and depressed."

White said a likely rematch between Holm and Rousey would put other potential matchups on the backburner.

"We don't make fights the night of the fight, but the rematch makes a lot of sense," he said. "The rematch is what the people want to see."