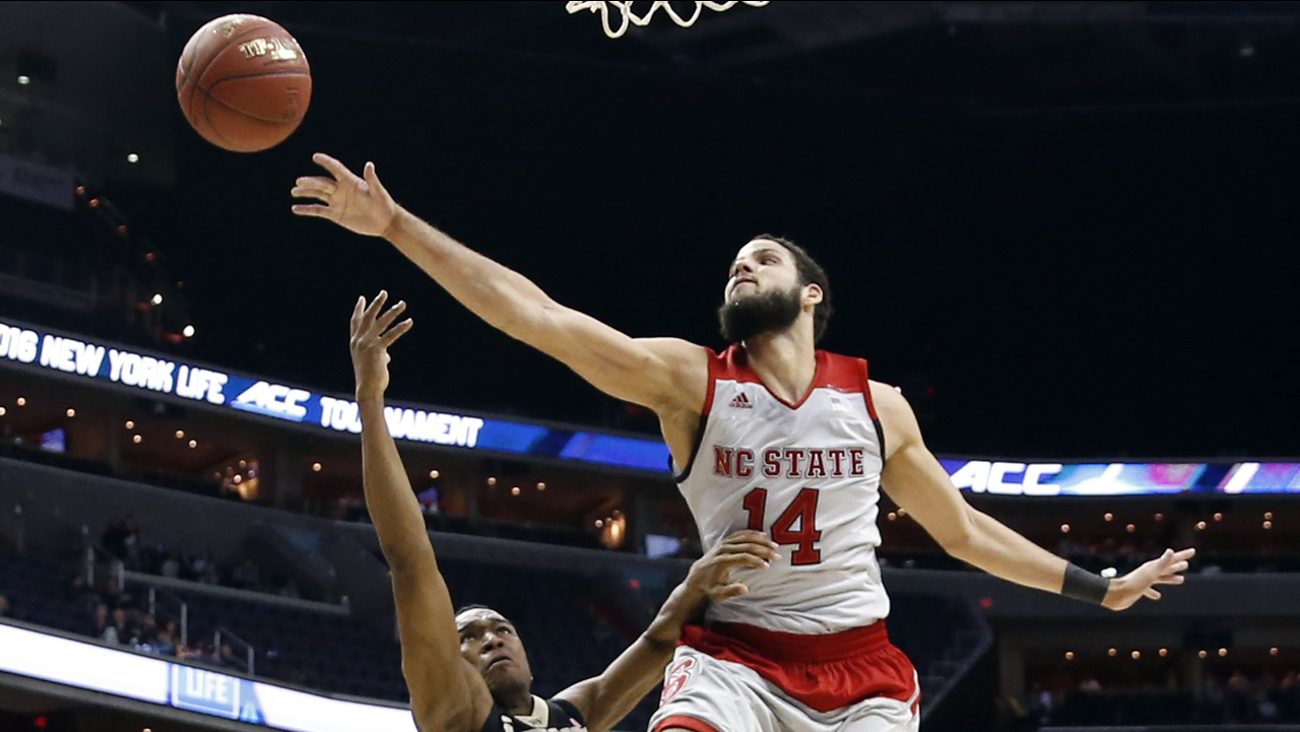 WASHINGTON -- When North Carolina State coach Mark Gottfried first watched Maverick Rowan at an event in Chicago, he told assistant Orlando Early that he wanted to recruit him. Rowan was ticketed to play at Pittsburgh, but once he decommitted, the race was on for the Wolfpack.

"I said, 'That guy's got a pair of steel ones down there,'" Gottfried said. "He's not afraid. He's never been."

Rowan was not afraid to shoot Tuesday, and his three consecutive 3-pointers keyed N.C. State's 75-72 victory against Wake Forest in the opening game of the ACC Tournament. Rowan shot 6 of 13 from 3-point territory for a game-high 24 points as the Wolfpack advanced to play No. 19 Duke in the second round.

The freshman swingman said he couldn't remember ever having a more important stretch than his back-to-back-to-back 3s over 1:26 in the second half. Rowan credited ACC leading scorer Anthony "Cat" Barber for setting screens to get him open, and he said he let the game come to him.

"Mav got great looks, and he was knocking them down," said Barber, who scored 22 points including several big free throws down the stretch.

Barber started 2 of 11 from the field before making five of his final 10 shots. Wake Forest coach Danny Manning took pride in how his team held the sophomore guard down early before breaking out.

In a back-and-forth game that featured 15 ties and 16 lead changes, Manning lamented turnovers and rebounding as the main reasons his team's season came to an end.

The biggest question for the Demon Deacons (11-20) was their last possession. Trailing by three the plan was to get the ball to Bryant Crawford for a shot; he missed his 3-point attempt and seniors Codi Miller-McIntyre and Devin Thomas missed their last-gasp chances.

"That's the best look we could get at that point in time," Manning said. "So you have to take it."

Crawford, from nearby Silver Spring, Maryland, led Wake Forest with 19 points and helped keep his team in the game as Rowan was draining 3s. But he was more upset about his defense in those situations.

"I was just going with the flow of the game," Crawford said. "We were going back and forth. I wish in that stretch I could have got a few stops, which would have helped for the team."

Rowan was right about the screens making a major difference, and the combination of his 3-point production and defense that held Wake Forest to 37.3 percent shooting has N.C. State (16-16) still alive.

Duke awaits in the second round, and the Wolfpack could all use Rowan's fortitude in preparing for the Blue Devils.

"We're not scared," Barber said. "We're not going into this game worried about it. We're going to go back to the hotel, relax and be ready. I'm just going to keep saying that, we're going to be ready."

Wake Forest: Miller-McIntyre and Thomas combined to shoot 10 of 30. ... The Demon Deacons haven't won in the District of Columbia since beating George Washington 78-77 on Dec. 6, 1975. ... This was Wake Forest's second game at Verizon Center. The first game was in 2005, also an ACC Tournament loss to N.C. State.

N.C. State: Barber clutched his right arm several times after falling to the floor with 5.2 seconds left in the first half. He did not miss any time as a result of the fall, playing all 40 minutes. ... Assistant coach Rob Moxley received the ACC's Bob Bradley Spirit and Courage Award prior to the game. Moxley, whose life-threatening health scare hospitalized him 10 months ago, will transition to director of player personnel for next season. ... N.C. State improved to 21-11 in March and 8-4 in the ACC Tournament under coach Mark Gottfried.

N.C. State: Faces No. 19 Duke in second round Wednesday.