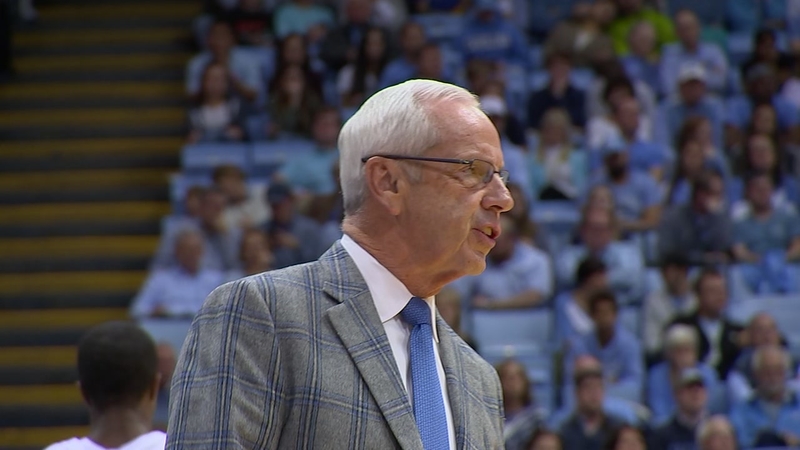 CHAPEL HILL, N.C. (WTVD) -- Roy Williams made it clear Friday that if he had his way, Silent Sam would not have a place on North Carolina's campus.

Citing the incredible divisiveness of the statue, along with the initial reasoning and wording behind its installation, Roy said "I don't think we should have it ... I wish it wasn't here."

Williams said he also fully supports his players getting involved in activism regarding Silent Sam, as long as they don't do anything that "surprises" him.

Currently, four Tar Heels - Garrison Brooks, KJ Smith, Brandon Robinson and Sterling Manley - have signed their name to a statement and petition calling for the removal of Silent Sam from campus.

ABC11 spoke to Manley on Friday afternoon at the Smith Center about the reasoning behind his decision to join the protest:

Here's Sterling Manley on why he signed the anti-Silent Sam petition (lightly edited to get down to 2:20) pic.twitter.com/AjYkc9wou0

Williams was also asked Friday whether his mentor Dean Smith's track record of social activism had played any role in his opinions about the statue.

Williams said no, that his feelings and decision to make them known were his own.

All that said, Williams was clear that he knows the university is hamstrung by state laws regarding the removal of the statue. He said he feels worst for UNC Chancellor Carol Folt, whom he said is in a no-win situation.
Report a correction or typo
Related topics:
sportschapel hillstate politicsuncpoliticsconfederate monumentunc tar heelssilent sam
Copyright © 2021 WTVD-TV. All Rights Reserved.
TOP STORIES
CDC expected to backpedal on some masking guidelines
LATEST: Percent of positive COVID tests jumps to 10.4%
'This is how I'm going to die': Officers tell Jan. 6 stories
Simone Biles explains why she 'took a step back' from team finals
'Shocked and disappointed': Vaccinated Cary couple sick with COVID-19
Man pleading guilty to 4 of 8 Atlanta-area spa killings
Show More
'This virus is not a joke': FL girl, 15, with COVID on ventilator
Summer sports camps see surge in participation
Cary Fenton development announces new retailers
Crocodile bites 18-year-old and drags her into water in Mexico
Flood on I-95 causes multiple crashes, major delays
More TOP STORIES News