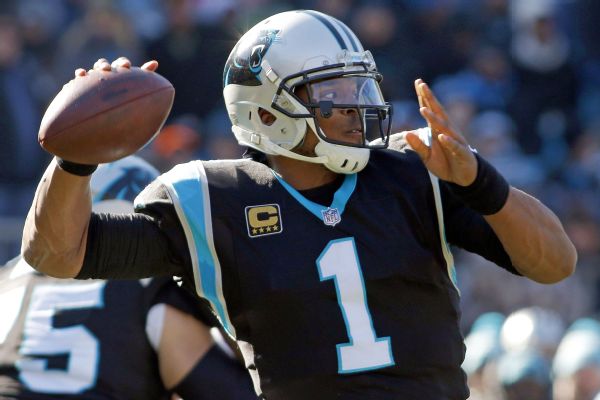 CHARLOTTE, N.C. -- Before the season even started, as Carolina Panthers quarterback Cam Newton talked about his new slimmed-down body at training camp, he scoffed at any notion that he might need to adjust his game to protect against injury and preserve his future.

He boasted that he planned on running just as often as he has throughout a career in which he has logged more rushing touchdowns than any other quarterback. But when the season started, his inability to run the ball successfully was glaring, as he averaged 18 yards rushing over the first five games.

Things have clicked since then, as he's averaged 61.9 yards per game over the past eight games, helping the 9-4 Panthers reach the thick of the playoff hunt.

Newton say he has now embraced that Carolina needs him to focus as much on his running game as his passing game.

"Oftentimes I still find myself looking around the league and looking at other quarterbacks' production and saying, 'You know, why can't I do this?' Or, 'I can do this if I was the given opportunity.'" Newton said Wednesday. "You know, Ben Roethlisberger the other night had a monster game. He threw the ball 66 times. No facade. Sixty-six.

"I'm looking and I'm saying to myself, 'That's not me.' And taking nothing against the Pittsburgh Steelers because they are an unbelievable team, they're very fun to watch. But for me, we have to run the football. That's our niche as an offense."

Newton has again embraced the approach he vowed to follow back in training camp.

"You have to understand certain things," Newton said then. "That's my edge. You don't expect a lion not to roar."

Newton, though, wasn't roaring the first five games, which included a game in which he didn't record a single yard rushing (despite seven attempts against Detroit).

That was about the time something clicked.

Newton's 62-yard gallop on Sunday in the Panthers' 31-24 victory over the Minnesota Vikings set up the game-winning touchdown and solidified that Newton's skills on the ground are as important as his arm.

He already has 585 rushing yards through 13 games this season.

And as the Panthers prepare to face one of the strongest arms in the league with the return of Aaron Rodgers for the Green Bay Packers this week, Newton prepares to focus on what he does best.

"I have no problem with running the football," Newton said. "I feel as if I've always taken care of that part. Contrary to what another person may think, football is a physical sport, so I can get just as sore in the pocket as I can get sore outside the pocket. I'm just trying to put as much pressure on the defense as possible to give them certain things that a lot of other quarterbacks can't give them."
Report a correction or typo
Related topics:
sportsespnthrowingrunningoffensecarolina panthersnflcam newtonquarterbackpassing
Copyright © 2022 ESPN Internet Ventures. All rights reserved.
TOP STORIES
$1.3M Raleigh home listed on Zillow for $17,000 in latest scam
19 kids, 2 teachers killed in TX school shooting; gunman's mom speaks
Several companies pull products linked to Jif peanut butter recall
Severe storms possible Friday, nice weekend ahead
Chapel Hill, Hillside HS students stage walkout for Uvalde victims
Wake, Durham districts discuss school resource officer role
Chapel Hill man charged with murder after body found in burning car
Show More
'Goodfellas' and 'Field of Dreams' actor Ray Liotta dies at 67
Officials: Buffalo, Uvalde shooters allegedly abused animals
OBX beach goers urged to wear shoes on beach
Onlookers urged police to charge into TX school: 'Go in there!'
UNC softball player to coach in summer baseball league
More TOP STORIES News