Russell Westbrook: Triple-double talk 'getting on my nerves' 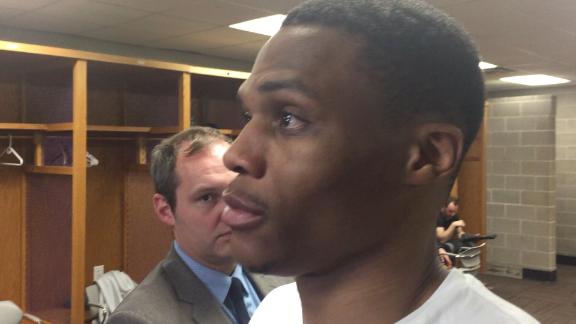 Westbrook failed to notch a triple-double for the third consecutive game in the Thunder's 109-89 loss Wednesday to the Utah Jazz, which qualifies as noteworthy due to his remarkable production so far this season.

But Westbrook wanted nothing to do with the triple-double talk after his 27-point, 6-rebound, 5-assist outing in the lopsided loss to the Jazz.

"All I care about is winning, man, honestly," Westbrook said. "All the numbers s--- don't mean nothing to me."

Westbrook's numbers do appear to mean a lot to the Thunder, however.

Oklahoma City is 9-3 when Westbrook records a triple-double this season. The Thunder are 6-8 when he falls short of a triple-double, including back-to-back blowout losses to the Portland Trail Blazers and Jazz the past two nights. He had 20 points, 6 rebounds and 6 assists in the loss in Portland on Tuesday night.

Westbrook has had fewer than six rebounds in a game, his total in both of the back-to-back losses, only once this season. The five assists he had against the Jazz matched his season low.

Westbrook, who is averaging 30.5 points, 10.5 rebounds and 10.6 assists per game, brushed off a question about whether it was realistic to expect him to continue to put up an average statistical line not seen in the NBA since Robertson's 1961-62 season.

Thunder coach Billy Donovan pointed to his team's poor shooting (36.6 percent from the floor) and the Jazz's outstanding shooting (58.3 percent) as the primary reasons that Westbrook didn't approach a triple-double Wednesday night. Donovan downplayed concern about the Thunder, who were 18-0 when Westbrook posted a triple-double last season, being so dependent on the point guard's all-around production.

"He is going to be who he is," Donovan said. "I think the biggest thing we talk about with Russell all the time, and I think Russell really talks about this a lot, is just playing efficiently. ... He had a hard time getting a triple-double tonight because of the shooting percentage that Utah shot and the fact that we didn't shoot the ball well. So there goes the rebounds and assists right off the board there."