Scott Darling excited by chance to be Hurricanes' top goalie 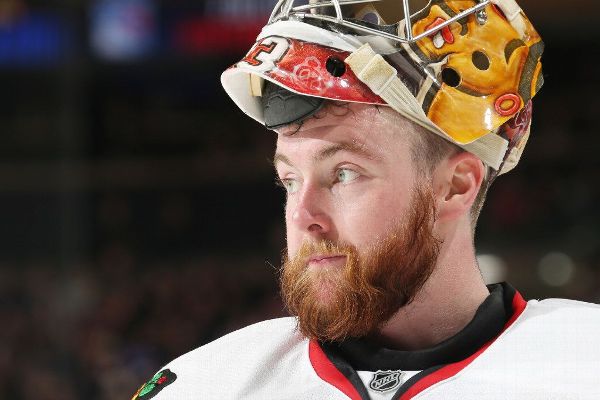 RALEIGH, N.C. -- So much has changed for Scott Darling in the past few weeks -- a new team, a new contract and a new role as the Carolina Hurricanes' presumptive starting goalie.

There's still four long months until preseason camp begins, but he's ready to get started and take advantage of this chance.

"There's always pressure -- you're in the NHL, it's your job to play well and perform," Darling said Wednesday. "Especially at goalie, you feel a little bit more pressure because you're kind of in the limelight there. I'm excited for the challenge. It's kind of what I've been hoping for my whole career, to have this opportunity, and I can't wait to get started."

It's been a blur of a spring for Darling, who spent three seasons backing up two-time Stanley Cup winner Corey Crawford in Chicago before he was traded to Carolina on April 28 in exchange for a draft pick.

The deal represented a bit of a gamble on Carolina's part because Darling was still eligible for unrestricted free agency on July 1. Both sides avoided that last week when he and the team agreed to terms on a four-year contract worth $16.6 million.

"It's a two-way street -- they committed to me and they said they wanted me, and ... somebody wants you to play for them, it means a lot to me because I've always kind of been chasing this position," Darling said. "You could have waited, you could have played hardball, but everything came into place perfectly and I'm thrilled to be here."

The acquisition of Darling, 28, could make for some crowded nets in Carolina, with both Cam Ward ($3.1 million) and Eddie Lack ($3 million) also under contract for next season.

And while Darling made the point that "nothing's given to you in this league," it's pretty clear that the Hurricanes didn't make him their most expensive goalie -- at an average of $4.15 million per year -- to be a backup.

They need him to help solidify a sometimes shaky situation in goal that contributed to the team missing the playoffs for an eighth consecutive season -- the longest active postseason drought in the NHL.

Carolina ranked 18th in the league, allowing 2.8 goals per game, while facing the fifth-fewest shots on goal.

Darling had career bests of 18 wins and 27 starts in his third year backing up Crawford, and had a 2.38 goals-against average in 32 games while helping the Blackhawks post the best record in the Western Conference. His .924 save percentage tied for fourth among goalies with more than 25 starts.

"I feel that I've grown a lot the last three years, and I've had a couple of opportunities with Corey being sick or going down that they've kind of given me the reins and I've shown that I can carry a heavy workload and be consistent," Darling said. "I'm excited for the chance to do it again."
Related topics:
sportsespngoalietradenhlgoaltendereddie lackscott darlingcam wardcarolina hurricanes
Copyright © 2020 ESPN Internet Ventures. All rights reserved.
More Videos
From CNN Newsource affiliates
TOP STORIES