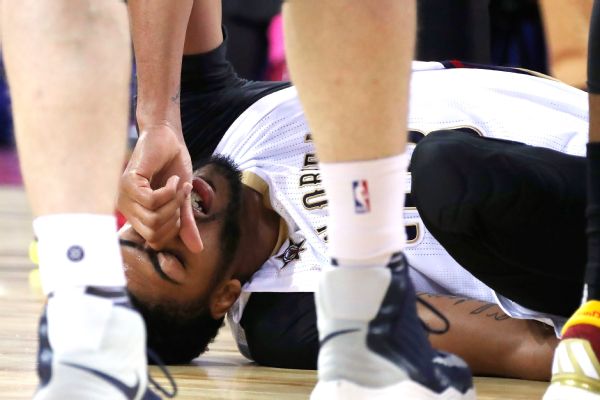 BEIJING --New Orleans Pelicans star Anthony Davis is expected to be out 10-15 days after suffering a Grade 2 right ankle sprain in Wednesday's preseason game against the Houston Rockets in Beijing, a source told The Undefeated.

Davis stepped on the foot of Rockets center Nenewhile making a move toward the basket in the post with 6:37 left to play in the first quarter of the Rockets' 116-104 victory. Davis stayed in the game after a timeout, but he checked out for good at the 5:07 mark in the first. He went back to the locker room and did not return.

He declined comment and wore a boot on his injured foot as he walked out of the arena en route to a long flight back to New Orleans. His injury could jeopardize his availability for the Pelicans' season-opener on Oct. 26.

Pelicans coach Alvin Gentry told reporters in China after the game that he hadn't yet talked to team trainers and wasn't sure which grade of a sprain Davis has.

Davis finished the game with two points on 1-for-5 shooting in seven minutes.

The 23-year-old underwent an ultrasonic debridement to correct a stress reaction and tendinopathy in his left knee last March. The Pelicans have attempted to ease Davis back in the preseason, including limiting his minutes and practice time.

Pelicans guard E'Twaun Moore also left the game with a right heel contusion and did not return.

The Pelicans lost 351 games to injury and illness last season, the second most in the past decade, and finished 12th in the Western Conference at 30-52.

"At this stage, and what has happened injury-wise, I just look and play who's there and who's available," Gentry said Tuesday. "I will say this, though: It's very frustrating.