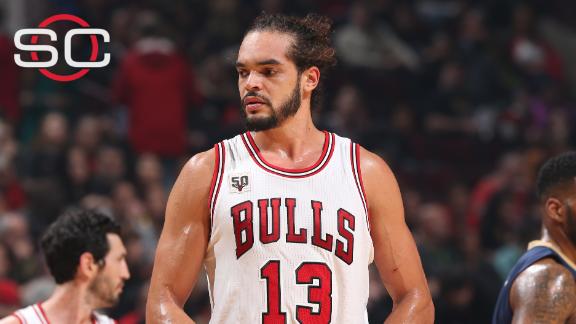 Noah will meet with the Knicks on Friday in Orlando, Florida, sources said.

The Knicks had emerged as the strong favorite to sign the free-agent big man, league sources previously told ESPN. Sources said multiple teams interested in the native New Yorker had all but conceded that the Knicks were his runaway preferred destination.

No deals can be signed until July 7, but teams and free agents could start coming to verbal agreements on contracts starting at 12:01 a.m. ET Friday.

The Knicks are eager to land a center this offseason, and Noah, a former All-Star, fits the bill. The Knicks have prioritized the position in free agency after sending Robin Lopez, last season's starting center, to Chicago in the Derrick Rosetrade.

Rose said last week that he would like Noah, who was his teammate on the Bulls, to join him in New York.

However, the first domino is Noah. If and when the Knicks agree to a number with Noah, they will move on to shooting guard. The Knicks would have roughly $14.5 million in remaining cap space if they agree to these terms with Noah.

The club hasn't ruled out the possibility of meeting with Kevin Durant, sources said.

The Knicks' interest in Rivers and location of the Noah meeting were first reported by The Vertical.

Noah, 31, is coming off a 2015-16 season filled with injury. He suffered two significant shoulder injuries that limited him to 29 games last season. He missed almost a month with a left shoulder tear and had season-ending surgery to repair a left shoulder dislocation in January. He has spent a portion of his summer at The Peak Performance Project in Santa Barbara, California.

ESPN's Marc Stein and Nick Friedell contributed to this report.