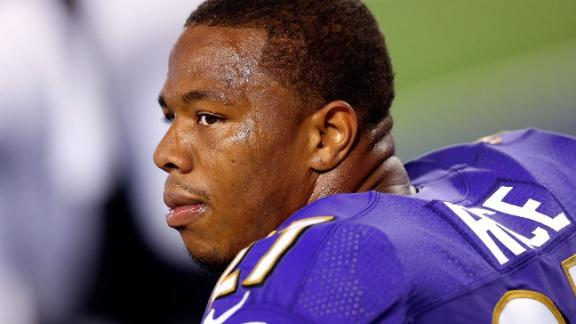 ESPN
By John Barr and Greg Amante
ATLANTIC CITY, N.J. -- Ray Rice spat in the face of Janay Palmer the night he punched her in a hotel elevator, one current and one former security staffer at the Revel hotel told "Outside the Lines."

Three current or former security staffers, who spoke with "Outside the Lines" this week on the condition of anonymity, described additional details of the ugly scene captured on video. Two of the men were on duty the night of the assault, while a third had full access to the security video, which he said he has watched dozens of times. TMZSports.com released a video this week that showed Rice punching Palmer in the face, appearing to knock her unconscious. Revel security workers watched the incident from the operations room through a security camera of the elevator.

One former staffer said Rice, the former Baltimore Ravens running back, spat in his then-fiance's face twice, "once outside the elevator and once inside," prompting her to retaliate with movements that were ultimately countered with a knockout punch. According to the men, as Rice punched Palmer, the elevator the couple rode was rapidly approaching the hotel lobby just two floors above the casino floor. A security staffer, dispatched from his lobby post, saw Rice starting to drag his fiance, who appeared to still be unconscious, out of the elevator.

The security staffers said they did not see any sign of injury on Palmer's face or head but added that her hair was covering much of her face, making it hard to determine her condition. They also said they didn't see any blood in the elevator or on the hip-level railing that Palmer's head appeared to strike as she fell to the elevator floor.

"The first thing he [Rice] said is, 'She's intoxicated. She drank too much. I'm just trying to get her to the room,'" one staffer said.

"When she regained consciousness she said, 'How could you do this to me? I'm the mother of your kid,'" that same staffer told "Outside the Lines."

With his fiance still groggy, Rice dialed somebody on his cellphone and said, "I'm getting arrested tonight," the staffer said. Police arrived in 10 to 15 minutes.

A copy of the security-camera footage was given to Atlantic City police within an hour of the incident, according the former security staffer.

In the hours and days after the assault, staffers replayed the security-camera footage hundreds of times, a former staffer said. He said a mention of Rice spitting on Palmer was noted in an internal security report, which he told "Outside the Lines" he had read "multiple times."

That former staffer estimates that 25 to 30 Revel security staffers saw the security camera footage of Rice striking Palmer. All of the staffers who spoke with "Outside the Lines" say they were not contacted by anyone from NFL security or the Ravens and they are not aware of any current or former co-workers who have been. The TMZ Sports video was shot off a video monitor with a cellphone camera, one former staffer told "Outside the Lines."

Rice was indicted on March 27 by a grand jury on a charge of third-degree aggravated assault. A day later, Rice and Palmer got married.

On May 1, Rice pleaded not guilty to the aggravated assault charge and applied for a pretrial intervention program. On May 20, Rice was accepted into the pretrial program and avoided prosecution.

On July 24, the league announced that Rice would be suspended for two games, but a month later, commissioner Roger Goodell said he'd made a mistake in Rice's punishment and announced new policies regarding league punishment for players involved in domestic violence incidents.

After TMZ released the video this week, Rice, the league, the Ravens and Goodell have faced significant criticism for their decisions. On Wednesday afternoon, the National Organization for Women asked Goodell to resign.

The Revel closed on Sept. 2 but still employs some people, including security.

John Barr is an investigative reporter, and Greg Amante is a producer, in ESPN's Enterprise/Investigative Unit.

Security Staffers: Rice Spat At Palmer
John Barr discusses comments by one current and one former security staffer at the Revel hotel indicating that Ray Rice spat in the face of then-fiancee Janay Palmer on the night she was knocked unconscious in a hotel elevator.

NFL Releases Statement In Response To AP Report
The NFL released a statement in response to the Associated Press report that the league was sent the video of Ray Rice hitting his then-fiancee back in April.