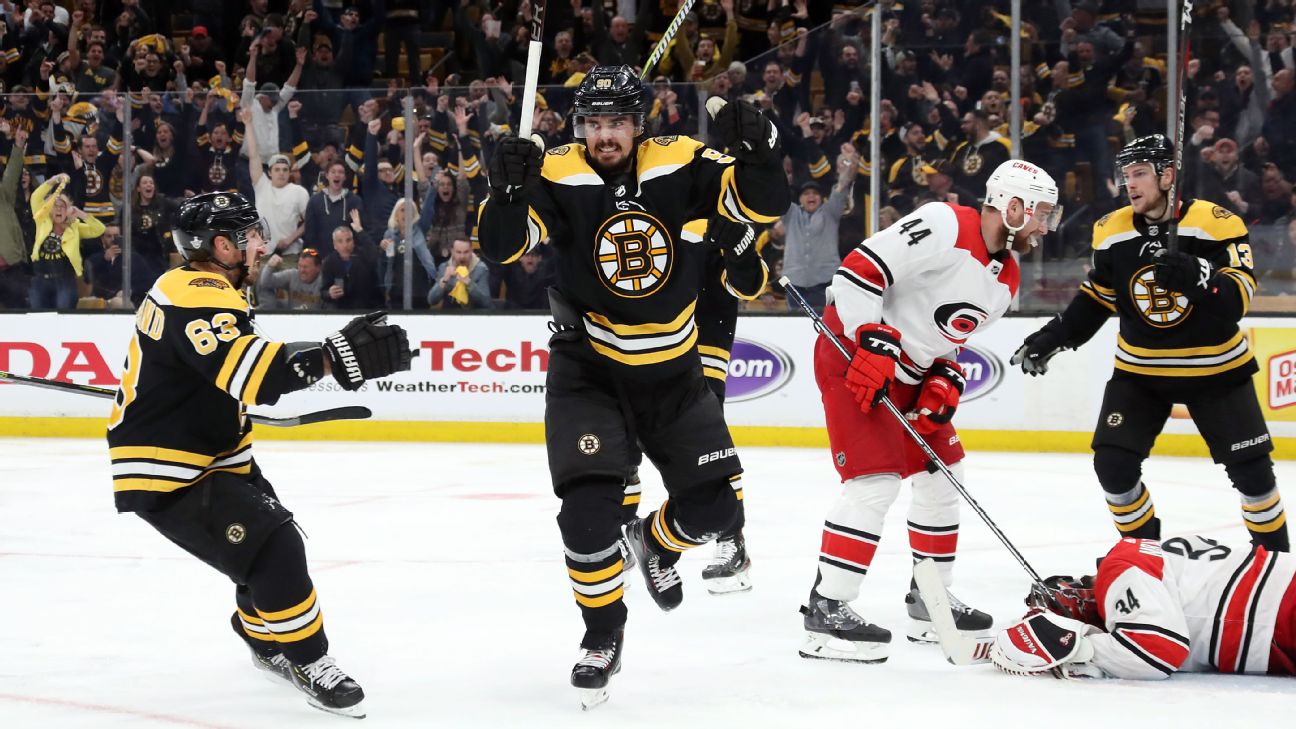 ESPN
By Emily Kaplan
The conference finals are officially underway, as the Boston Bruins used a huge third period to defeat the Carolina Hurricanes in Game 1. The bad news? We have to wait a day until the Western Conference series begins on Saturday.

Play of the night | Social post of the day

In the previous round, the Hurricanes saw firsthand how difficult it was for the Islanders to muster energy after a long layoff between rounds, but the Canes didn't seem to have that problem at all. Things opened up in the second period. According to Natural Stat Trick, there were a combined 13 scoring chances in the second (Carolina had a 7-6 edge) compared to just five in the first (Carolina had a 3-2 edge). Tuukka Rask, coming off an excellent second-round series, kept the Bruins in it.

Then Boston surged with four goals in the third -- including two 28 seconds apart that regained the lead. The Bruins added an empty-netter and a breakaway goal in the closing minutes to make this game look less close than it was for the preceding 58.

1. Marcus Johansson, C, Boston Bruins. Entering this game, the Bruins' power play had been the best of any team in the postseason (28.6 percent) but wasn't all too great in the Columbus series. Johansson and the second power-play unit helped reignite things, with a huge goal in the third to tie the score at 2-2. Johansson added an assist.

2. Tuukka Rask, G,Boston Bruins. Rask has been strong this postseason, and Thursday was yet another example. He stopped 29 of 31 shots, including some huge saves before and after his teammates' offensive explosion.

3. Greg McKegg, C, Carolina Hurricanes. It was the second straight game with a goal for the fourth-liner; before that, he had gone 23 straight games, dating back to the regular season, without one. It's a pretty cool moment for McKegg: The Hurricanes are his fourth team since the start of the 2016-17 season (he has been traded twice and waived twice).

And the first goal of the Eastern Conference Final has been scored by... Steven Kampfer, just as we all drew it up. #NHLBruins lead 1-0 pic.twitter.com/NAkHjEL3vN

This was a special moment for Steven Kampfer, who drew into the lineup because of Charlie McAvoy's suspension. Kampfer, 30, was playing in his second career playoff game, a chance eight years in the making. No problem. He plugged in with a goal just three minutes in.

"My parents always told me, if you're nervous, you're ready to go," he told NBC's Kathryn Tappen after the first period.

Poor Dougie Hamilton. He got traded from Boston, and then his old fans serenaded him with chants of his name as he took two penalties.

And not everyone agreed with this call.

This? An NHL referee who I'm certain was assigned this game because he earned it, called this? That sets a ridiculous standard for this game and both teams, that he can't maintain... and won't. What a joke. Do better. https://t.co/Vo1dkZHu4l

Dougie Hamilton reviewed video of both of his third-period penalties before speaking with reporters: "I just watched both of them and I didn't agree with either."

Hintz played Game 7 with a broken foot. Janmark broke foot back in February or March and it kept getting aggravated. Zuccarello break was healed, but tendons were struggling and got injections before each game.

Reporter: Can you talk about the Bergeron line

Unfortunately for Hurricanes coach Rod Brind'Amour, he'll likely have to face the same questions before Game 2. 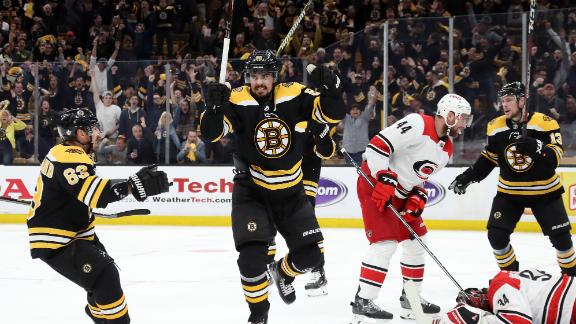