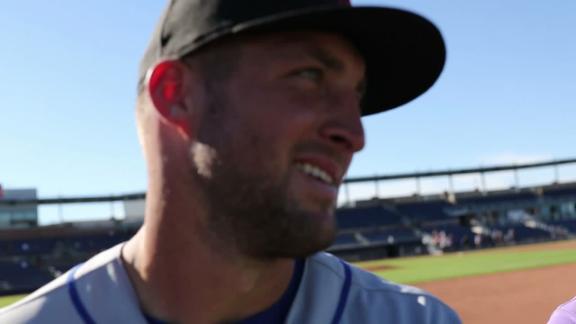 PEORIA, Ariz. -- Tim Tebow remains hitless in the Arizona Fall League as the ex-quarterback heads to Knoxville for Saturday's SEC football showdown between top-ranked Alabama and No. 9 Tennessee.

Tebow went 0-for-3 with a walk, two strikeouts and a run scored Thursday as the designated hitter for the Scottsdale Scorpions in a 5-2 loss to the Peoria Javelinas.

Through three games in the league for top prospects, Tebow is now 0-for-9 with three strikeouts, two walks and an RBI. All of his six outs put in play have been hit to the right side of the infield -- two grounders to second base, three to first base and a squibber in front of the plate. He manned left field in his opening two games.

"I'm getting adjusted. I need to get back into the rhythm," Tebow said. "I was a little late on a couple of fastballs I could have done something with."

Scottsdale hitting coach Damon Minor, who played parts of four seasons with the San Francisco Giants, said, "He hasn't done it in a while. ... He's very athletic, and you can tell he competes."

Tebow is excused from Friday and Saturday AFL games because of his ESPN broadcasting responsibilities. The AFL is dark on Sundays, so Tebow will resume his baseball pursuit on Monday.

Coincidentally, the New York Jets -- one of Tebow's former employers -- will be playing nearby against the Arizona Cardinalson Monday. However, Tebow will be unable to attend because the Scorpions have the AFL's lone night game on Monday.

Tebow signed a minor league deal for $100,000 with the Mets last month.

"The progress is being made," said Scottsdale manager Tom Goodwin, who also serves as the first-base coach for the Mets. "It's slowly but surely coming along. He's got some TV obligations to fulfill, and he'll come back Monday and he'll be ready to go."

"I'm sure he's said it to you before: He's missing pitches that he should hit," Goodwin said. "He's rolling over [pitches] right now. That's going to happen, because you're anxious up there. You want to hit the ball. So you go out and get it instead of letting it travel a little deeper.

"Every time he comes out and plays, I would expect him to get better at that. And then he's going to have to learn, when he gets his pitch to hit, to not miss it. There are a couple of balls, I'm sure, he feels he should have hit that he's not hitting. That's a part of baseball. That's a part of learning your strike zone and learning your bat path, and then putting a good swing on the ball that happens to be in your path."

The employees at Peoria Sports Complex, the spring training home of the Seattle Mariners and San Diego Padres, had fun each time Tebow stepped to the plate during Thursday's AFL game. The scoreboard listed Tebow's career statistics as "TD 17, INT 9, YDS 2,422."

Despite the initial on-field struggles, Tebow had an eventful opening week in the AFL. When a 30-year-old autograph seeker suffered a seizure after Tebow's AFL debut on Tuesday, the ex-quarterback stayed with the man and prayed for his well-being until paramedics arrived.

Tebow said he is not discouraged by his hitless opening week in the AFL.

"It's too much of a process," Tebow said. "After everything I've been through in sports, I wouldn't be up and down over three games." 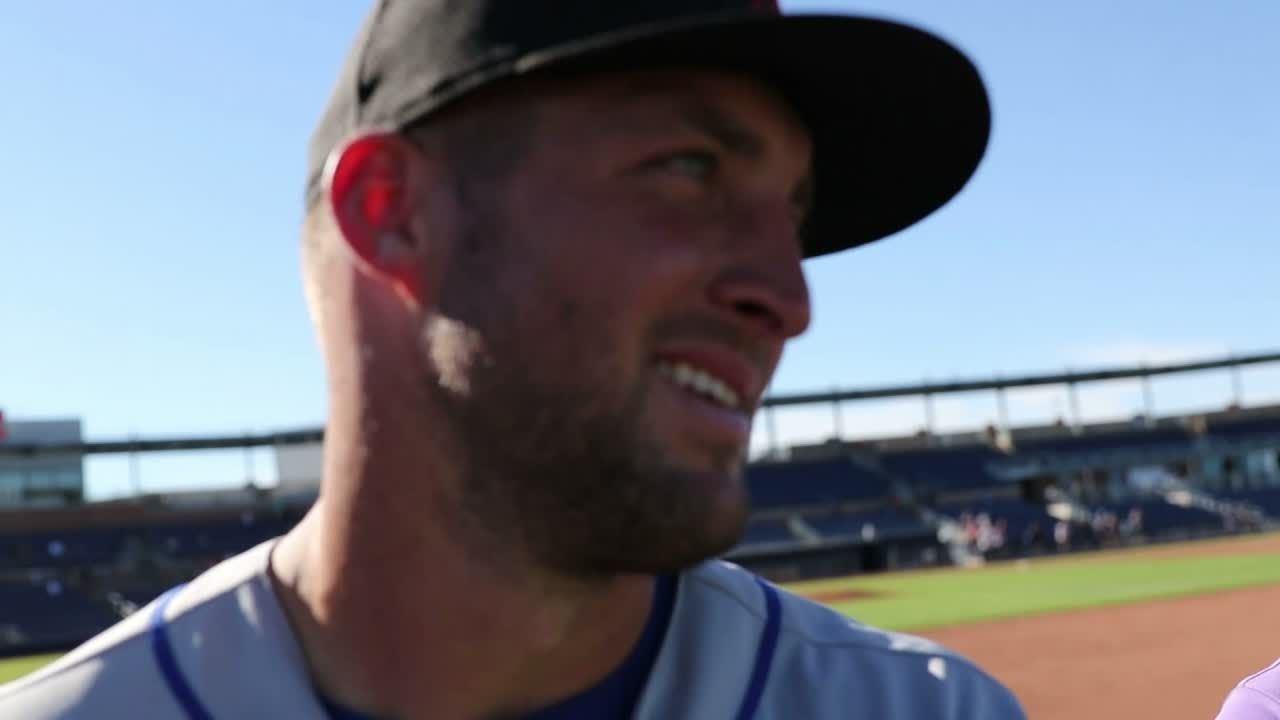