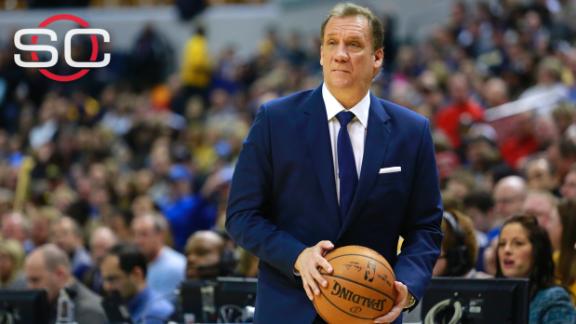 Flip Saunders, who tallied more than 1,000 victories over a 35-year coaching career that included successful stops with the Minnesota Timberwolves and Detroit Pistons, died Sunday of cancer at age 60.

He also coached the Washington Wizards during a career that spanned 17 seasons as an NBA head coach and a 654-592 record.

Saunders announced in August that he was being treated for Hodgkin lymphoma. Doctors considered it "very treatable and curable," and Saunders at the time said he planned to remain the Timberwolves' head coach and president of basketball operations. However, he was hospitalized following a setback in September, and it was announced Friday that Saunders would miss the entire 2015-16 season.

"The NBA family is mourning today over the tragic loss of our friend and colleague, Flip Saunders," NBA commissioner Adam Silver said in a statement. "... Flip's untimely passing has left a gaping hole in the fabric of our league. Flip was a beloved figure around the NBA, nowhere more so than in Minnesota, demonstrating a genuine and consistent passion for his players, his team and the game. On behalf of the NBA, we offer our most sincere condolences to Flip's wife, Debbie, their four children and the entire Minnesota Timberwolves organization."

Saunders first became an NBA head coach in 1996 with the Timberwolves and eventually led the team to eight straight playoff appearances. A standout offensive coach, Saunders specialized in coaching point guards. But perhaps the player he had the greatest impact on was a big man, a wiry kid who came straight from high school in 1995 named Kevin Garnett. Under Saunders' tutelage, Garnett developed into one of the best players in the NBA and eventually an MVP.

After being fired by Minnesota in 2005, Saunders was hired by the Pistons the next season and took Detroit to the conference finals for all three seasons he was on the sideline.

Saunders, after a three-year stint with the Wizards, returned to the Wolves in 2013 as team president and part-owner. In 2014 he took over again as coach. He was in the process of a major rebuilding effort following the trade of Kevin Love that included the acquisition of rookie of the year Andrew Wiggins, the engineering of Garnett's return to mentor young players, the construction of a new downtown practice facility and a renovation of the Target Center.

Wiggins, as well as many others in the NBA, headed to social media to remember Saunders.

"It was an honor to be able to coach with Flip for over 10 years and a privilege to call him a friend for life," said Wizards coach Randy Wittman, who was an assistant for Saunders with both the Timberwolves and the Wizards. "Although I join the entire basketball world in deep sadness over his passing, we should all celebrate a great man who was able to do so much for the game he loved, the people and players he worked with and the communities where he lived."

NBA coaches will wear a lapel pin this season to honor the memory of Saunders, according to Dallas Mavericks coach Rick Carlisle, the president of the league's coaches association.

Chicago Bulls coach Fred Hoiberg, who played for Saunders with the Timberwolves from 2003 to 2005, said he was in "a little bit of shock" after learning of his death.

"Flip played a huge part in my life. Everything from bringing me in and giving me a chance, to taking a lot of the philosophy that he had," Hoiberg said Sunday. "He was a great mentor, a great leader ... a special, special person.

"And that's the thing, you're riding home on a plane win or lose -- Flip was always upbeat. [He'd] talk to you, come back and see how you're feeling, especially during struggles. He was a fatherly figure, such a caring individual. It's just awful how this whole thing went down with the complications from his cancer. It's just a sad, sad day. He'll be greatly missed."

His NBA teams won 50 or more games on seven occasions, including a Pistons franchise-record 64 victories in 2005-06. Twice he coached in the All-Star Game, and he led Team USA to the gold medal in the Goodwill Games in 2001. He also spent time as an analyst at ESPN.

Players union executive director Michele Roberts said in a statement the NBPA and "its entire membership were saddened to hear the news of Flip Saunders passing.

"He was not only a well-liked and well-respected coach," Roberts said in the news release. "He was also a mentor and friend to so many of our players. His impact on our players, the game and his community is profound, and we will miss him. Our thoughts and prayers go out to the Saunders family and the entire basketball fraternity, as we mourn this loss."

John Wall, who played for Saunders with the Wizards, issued condolences on Instagram: "The sting of losing another loved one to cancer doesn't get any easier. My thoughts & prayers are with the Saunders &Twolves family."

Philip Daniel Saunders was born on Feb. 23, 1955, in Cleveland and was a prep basketball star at Cuyahoga Heights High School, where he was named the state's player of the year after averaging 32 points a game during his senior season.

His mother Kay nicknamed him Flip after hearing the name at a beauty salon.

In college he played on juggernaut teams at Minnesota, where he played alongside future NBA players Mychal Thompson, Ray Williams and Kevin McHale.

He began his coaching career at Golden Valley Lutheran College in St. Paul, Minnesota, in 1977 and eventually rose up the ranks during seven seasons in the Continental Basketball Association, leading the La Crosse Catbirds to two league championships.

He landed in the NBA in 1995, when he wrote a letter to new owner Glen Taylor asking for a job. His college buddy, McHale, took over the basketball operations with the Timberwolves, and Saunders became the team's general manager. When Bill Blair was fired 20 games into the season, Saunders was suddenly the head coach of a struggling franchise that had never made the playoffs.

Upon his return in 2013, Saunders grabbed a level of influence within the Wolves that was unmatched in the NBA. His fingerprints were on everything, from personnel decisions to in-game strategies, even down to the pregame entertainment.

He liked to sneak up behind unsuspecting visitors to Target Center, clamp his hand down on a shoulder and squeeze with a vise-like grip that came from hours of massaging his polio-stricken mother in his youth.

He would carry around autographed cards of himself to hand out to fans, and playfully give them to media members as well with a mischievous grin on his face.

Gregarious and outgoing, he endeared himself to a Twin Cities community that viewed him as a hometown boy done good, with his Gophers roots overshadowing his Cleveland upbringing. And Flip loved Minnesota right back. When he returned to the organization after 10 years away, he recounted a story about working for ESPN and being asked why he still lived in Minnesota so long after he was fired.

Saunders is survived by his wife and four children, including son Ryan, who is a Wolves assistant coach.

"This is a very sad day and my heart, my prayers and condolences go out to the entire Saunders family," Clippers coach Doc Rivers said Sunday. "Flip was more than just a friend; he was a confidant and a mentor. The basketball world lost a 'coaches' coach' today, and I lost a great friend."

The Timberwolves open the season Wednesday. Sam Mitchell has been named interim coach, and GM Milt Newton is heading the team's personnel department.

ESPN's Brian Windhorst, Tim MacMahon and The Associated Press contributed to this report.