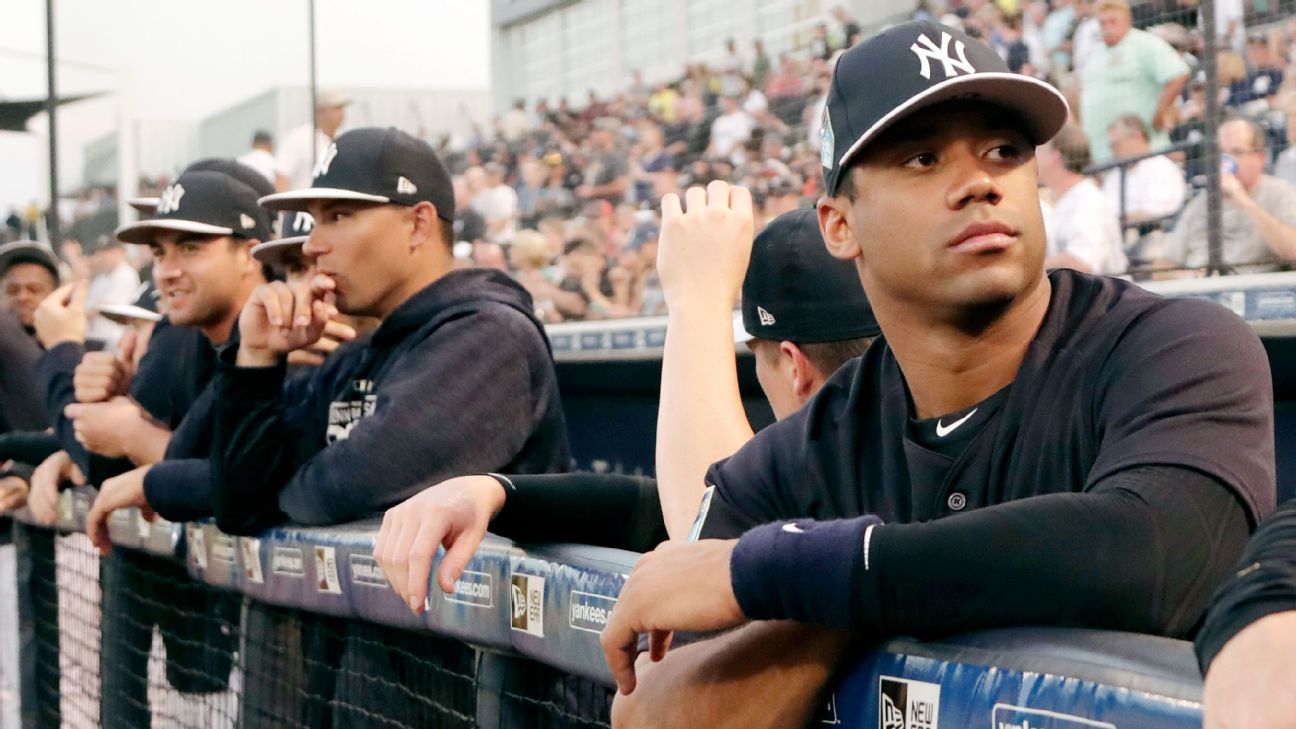 The past two quarterbacks to win a Super Bowl -- Tom Brady and Patrick Mahomes -- could have been pro baseball players.

Before Brady won six rings, he was chosen in the 18th round of the 1995 draft by the Montreal Expos. "He was a left-handed-hitting catcher with power. He had a good future," the Expos' then-director of college scouting, Ed Creech, told the Montreal Gazette in 2002.


No one knows where that path would have led, but it's safe to say Brady made the right choice to focus on football.

The same can be said for Mahomes, the reigning Super Bowl MVP whose dad pitched in the major leagues for 11 seasons. The Chiefs quarterback was also a gifted pitcher, tossing a no-hitter with 16 strikeouts in high school.

Stat line: Mahomes not only could reach 93 mph as a pitcher for Whitehouse High School, but he reportedly "hit better than .450" his senior year, according to MaxPreps.

Scouting report: As a high school junior, Mahomes was still pretty raw. While he was also an outfield prospect, Mahomes was most promising as a pitcher, where he was a third-round prospect or so. -- ESPN MLB Insider Kiley McDaniel

Famous baseball connection: It starts with Mahomes' father, who pitched for six major league teams in 11 seasons. Mahomes pitched a no-hitter in high school, striking out 16. The opposing pitcher? White Sox pitcher Michael Kopech, who was traded to Chicago in the Chris Sale deal.

He said it: "I just wanted to follow it and see where it took me," Mahomes told ESPN's Jenna Laine on choosing football over baseball. "I still thought there was a good chance I was gonna play baseball, but I wanted to see where football took me, and I was able to go out there [and succeed]."

Why was he drafted: Brady "was drafted in the 18th round because everyone knew how difficult it would be to sign him," John Hughes, then a scout with the Expos, told the New York Daily News in 2019. "He was very talented. I mean on talent alone he would have been projected a late second-round pick. And I believe he would have made it [to the majors]; as a catcher, he would have gotten there."

Scouting report: Brady "could really catch and throw," former Junipero Serra High School baseball coach Pete Jensen told the Star-Ledger in 2012. "I was a part-time scout with the Mariners. So, prior to the June draft, I took Tommy to a pre-draft workout at the Kingdome with a bunch of other prospects. He put on a show. He hit two or three balls out in batting practice with a wood bat and was probably the best-throwing guy there."

Added former Expos GM Kevin Malone, via Bleacher Report's Bill Sparos: "He could have been one of the greatest catchers ever. I know that's quite a statement, but the projections were based on the fact we had a left-hand-hitting catcher, with arm strength and who was athletic."

He said it: "I just loved football more," Brady said to Howard Stern in a 2020 interview when asked why he didn't pursue pro baseball. "I was a pretty good baseball player. I was probably a better baseball player in high school than a football player, and then I think I was just in love with football. When I became quarterback, I wanted to become more of a football player and I ... even though I got offered to play baseball. I thought in the end I'd rather go to college and play football than go play professional baseball. It was a pretty easy decision."

Full coverage of the 2020 MLB draft is available here

Scouting report: Has the athleticism and aptitude that gave scouts reason to believe he could be a quality infielder. -- Baseball America

He said it: "While football is my passion and my livelihood, baseball remains a huge part of where I came from and who I am today," Wilson said in 2018 after being acquired by the New York Yankees. "I've learned so much on the baseball field that translates to my game physically and mentally playing quarterback in the NFL."

Scouting report: The A's took an optimistic viewpoint on his talent, essentially assuming he'd continue improving with more reps at the same rate that he'd improved throughout the year. He's an easy plus runner, strong center fielder and was electric at the plate with above-average raw power, but a little too aggressive with poor pitch selection. If he hit his upside, he'd be a .260-ish hitter with 25 homers who played as an above-average center fielder -- in the Victor Robles or Starling Marte area. Ironically, the weakest point of his game aside from pitch selection was throwing. I watched him for a weekend, and the scouts' most-discussed topic was about watching him throw and concluding that his football-type throwing motion was holding him back. -- McDaniel

He said it: "It helps a lot," Murray said of his baseball skills on the football field, according to a report by ESPN's Josh Weinfuss. "I've seen a lot of terrible slides in my day. It's a lot smoother than other people, you know, the pop-up slide, stuff like that, just being able to get down whenever I want. Yeah, I think it helps."

Murray got some advice on choosing between baseball and football from Wilson: "I told him do what he really kind of dreamed about doing ever since he was little. ... Try everything you can to keep your options open in that sense," Wilson told ESPN's Brady Henderson. "I think that to be able to have the gift of playing pro football and pro baseball is a special gift. There's only so many people in the world who get to do that and have the opportunity to do that at a high level, too. I think that, more than anything else, is look at it as a blessing, not a curse. Sometimes you can get worried about what may happen or this or that and am I making the right decision. Just go for it. At the end of the day, something great is going to happen."

Famous baseball connections: Fourteen teammates on the GCL Red Sox have played in the majors -- a few were veterans on rehab, such as Carl Crawford and Jacoby Ellsbury.

Quote: "I just learned how to be a professional," Thompson told NFL.com in 2016 of his time with the Red Sox. "Learned how to carry myself and it really taught me how to be on my own. I was on my own at 18, and I didn't have my mom or nobody down there. It was learning how to grow up."

Scouting report: Tate displayed good speed but showed little in-game power at Notre Dame. Tate said he struggled hitting curveballs, but his speed was "what got [him] around." -- McDaniel

He said it: "I quickly realized that I can affect a football field more than a baseball diamond," Tate said in an interview at the fourth annual Tennessean sports awards via USA Today. "On the baseball field, I could maybe make a diving catch or maybe hit a home run every now or then.

"But on a football field on first, second, third, fourth down, punt return and kick return, I can make a play. I felt like I was better at football. Looking back at it, I think it worked out."

Stat line: Brown was a standout on the Starkville (Mississippi) High baseball team, batting third. He hit "over .360" during his senior year, according to the Jackson Clarion-Ledger.

He said it: "My dad, he put a bat in my hand as soon as I could walk, and I was good at it," Brown told ESPN's Turron Davenport. "Baseball really helped me out with that for football. When you're tracking a ball, especially a deep ball, it helped me a lot. I played center field in baseball. On a deep pass in football, you judge it and go track it just like a center fielder."

Scouting report: As a high school underclassman, he was a big-bodied, plus-running, switch-hitting center fielder with power and speed. By the time I first saw him, he was a high school senior and a below-average runner who was either a right-field or first-base fit. He had plus raw power, but his contact skills were just all right and obviously he never got the reps to improve there. On the mound, at his best, he sat 92-96 mph as a reliever in college and his curveball was a 55 on the 20-80 scale (above average), but his command was below average, so he projected as a middle reliever, a fourth- to sixth-round prospect for the draft who would pitch in the sixth through eighth innings if things went well in pro ball.-- McDaniel

He said it: "Baseball was one of my passions just because I just felt so relentless when I was on that bump," Winston told ESPN's Jenna Laine. "You kind of felt individualized at times, because everyone saw when you made a mistake and everyone saw if you shined. And I really credit baseball to the way I am as a quarterback now because it's the same way it is as a quarterback -- everyone sees when you mess up and everyone sees when you shine."

Scouting report: I saw him pitch a few times in high school and the last one was just before the 2012 draft. He was well developed physically and got into the mid-90s with a breaking ball that flashed above average, but he had some reliever elements to his game. ... His athleticism played as a hitter as well. -- McDaniel

Stat line: Hurst was drafted as a relief pitcher who could reach 97 mph, but he also played some first base and designated hitter. Across the 2013-14 seasons with the Gulf Coast League Pirates, Hurst recorded 53 at-bats in 16 games, hitting .245 with two RBIs and a stolen base.

He said it: "The biggest thing that I take from my experiences from baseball, as hard as it was, what I went through in those three seasons, it's made me a pretty resilient person," Hurst told ESPN's David Newton in 2018. "Having that all taken away from me lit a fire under me. I don't take anything for granted these days, and I'm going to outwork the next guy. It's who I am and in my DNA right now."

Scouting report: "He's got a beautiful hack," Hart High School baseball coach Jim Ozella said of Moore to the Los Angeles Times in 2001. "He's an athlete." Moore didn't play baseball at UCLA, but while he was pursuing a college transfer for football, Moore was noticed by an Angels scout who spotted him playing in a Southern California rec league, and he was drafted as a third baseman.

Quote: "I had a lot of friends that went and played baseball out of high school. No offense to any of them, but it's hard," Moore told The Associated Press. "Baseball is a hard road to take and they were good players. I don't look at it as I took the wrong road by any means." 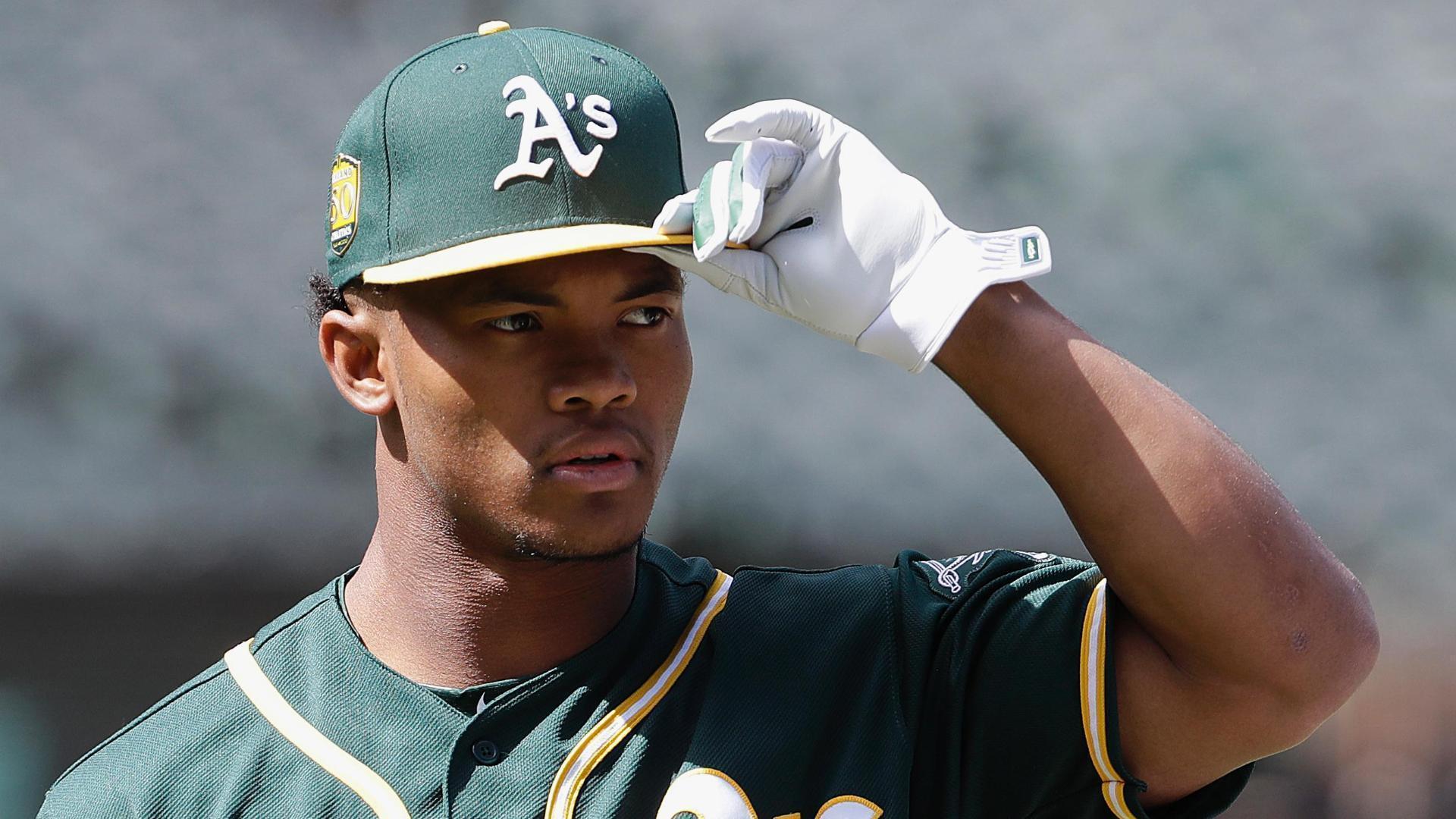 Why Kyler Murray projected better at baseball than other NFL players
David Schoenfield picks Kyler Murray over Tom Brady and Jameis Winston, among others, as the current NFL player who would have had the best baseball career. 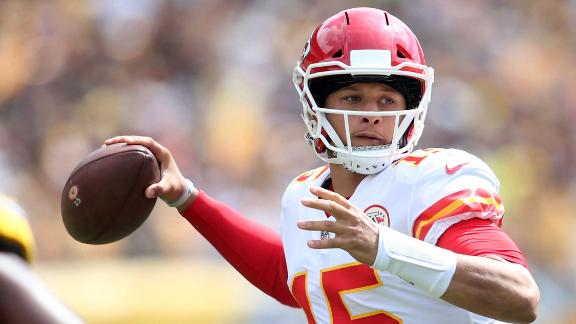 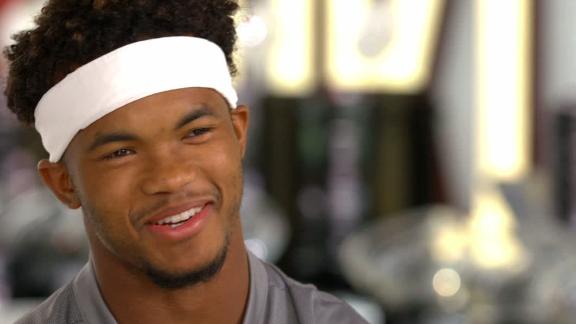 How Murray chose football over baseball
Maria Taylor takes Kyler Murray back to the diamond to talk about how playing baseball led him to football. 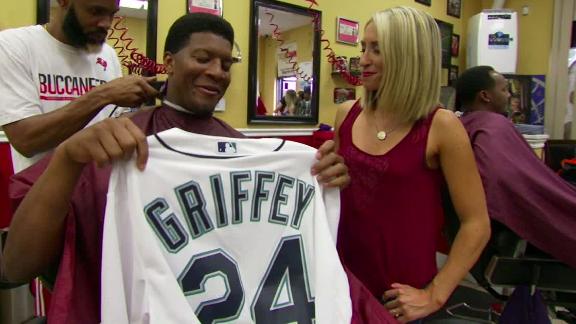