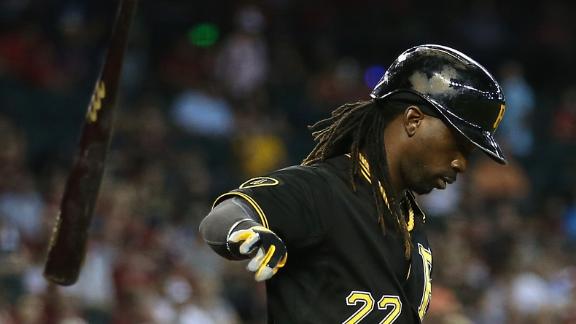 Arizona Diamondbacks chief baseball officer Tony La Russa defended his club Tuesday against the criticism it has received for the apparent retaliation against Pittsburgh Pirates star Andrew McCutchen this past weekend.

"I don't see where the Diamondbacks should catch all this [expletive] they're catching," La Russa told reporters, according to azcentral.com.

McCutchen was hit in the back by a pitch from Arizona reliever Randall Delgado on Saturday night. Although Delgado said the pitch got away from him, the Pirates suspected it was payback for Diamondbacks star first baseman Paul Goldschmidt suffering a season-ending broken left hand a night earlier when hit by a pitch from Pittsburgh reliever Ernesto Frieri.

The Pirates said McCutchen has been diagnosed with an avulsion fracture involving the costochondral cartilage of the left 11th rib and that  they will continue to evaluate his progress.

McCutchen hit a sacrifice fly and grabbed his left side as he jogged to first base Sunday. He said he couldn't be sure whether getting hit caused the injury but that he has "taken a million swings and have never felt anything in my side until Sunday."

"I was just sick to my stomach when I saw Paul got hit," La Russa said, according to MLB.com. "I was bothered when McCutchen got hit. I was bothered by it because I dislike that part of the game."

La Russa, who had a history of ordering his pitchers to retaliate when he was the St. Louis Cardinals' manager, said Tuesday that it's unfair the Diamondbacks have been criticized while Goldschmidt's injury as a result of a pitched ball has been largely ignored.

"I've heard a lot about McCutchen getting hit, but I haven't seen nearly as much about Goldschmidt, who isn't going to play the rest of the season," La Russa said, according to MLB.com.

"I think, wait a minute, five runs down in the ninth and this guy's lost and he's every bit the player that McCutchen is. They're in contention, but that makes no difference. There's a big difference between getting hit here [in the hands] and getting hit here [in the back]. That's why I think it's unfair. I think it will continue to be unfair because I don't think this message will get out. It's not a popular response, so they'll just dismiss it."

La Russa pointed out that his team has hit only 32 batters this season, while the Pirates, whose philosophy is to pitch up and in, have hit 61 -- the most in the majors.

The Diamondbacks have lost three players -- Aaron Hill, A.J. Pollock and Goldschmidt -- to broken hands due to pitched balls over the past two seasons, adding to La Russa's angst on the topic.