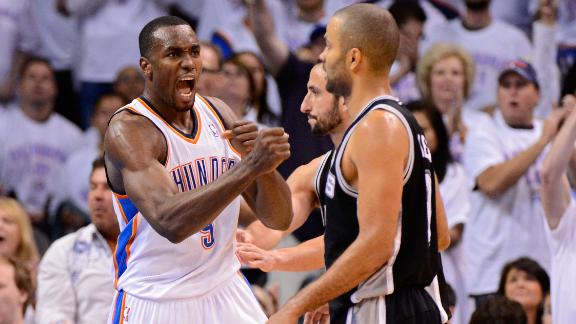 Oklahoma City Thunder power forward Serge Ibaka is expected to miss the rest of the postseason, but the San Antonio Spurs are suspending belief heading into Game 1 of their Western Conference finals showdown Monday night.

Ibaka suffered a left calf injury -- a Grade 2 strain of the plantaris -- in Oklahoma City's series-clinching win Thursday night against the Los Angeles Clippers. The injury takes time to heal and strengthen because of a high-reinjury rate.

But the Spurs remain skeptical.

"I don't really believe it," point guard Tony Parker told reporters Sunday. "I'll believe when I see tomorrow he is not on the court. It's hard to believe. We'll see."

Added Kawhi Leonard: "We're still not sure if he's going to play or not, but it doesn't matter."

Ibaka has averaged 12.2 points, 7.3 rebounds and 2.2 blocks in 13 playoff games. During the regular season, he notched career highs of 15.1 points and 8.8 rebounds a game while also leading the league in blocks for the fourth consecutive season with 219.

Oklahoma City swept its four regular-season meetings with the Spurs, who went 62-16 against the rest of the league for the NBA's best record this season.

"It's really a waste of time," Spurs coach Gregg Popovich told the San Antonio Express-News. "When the game starts, everybody will know what's going on, and everybody will adjust both ways."

The Spurs, meanwhile, received some good news on the injury front, as Parker, who suffered a strained hamstring during the second round, said the injury "feels better" and he's still on track to play in Monday's game.

ESPN.com's Marc Stein and The Associated Press contributed to this report.

Impact Of Serge Ibaka's Injury
George Karl discusses the impact Serge Ibaka's absence will have on the Western Conference finals between the Thunder and the Spurs. Karl identifies the offensive key for the Spurs and makes a series prediction.

Thunder Facing Tough Task Without Ibaka
Shelley Smith reports from San Antonio, where the Serge Ibaka-less Thunder are preparing to face the Spurs.