U.S. Olympic team rounding into form but won't have LeBron James in Rio 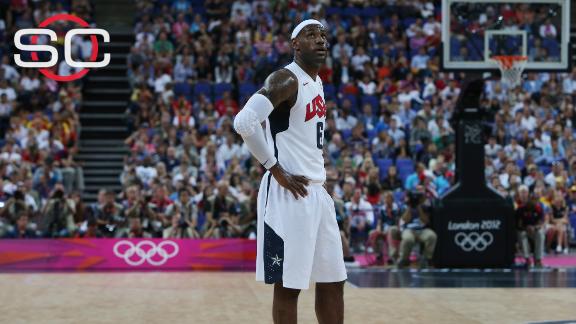 Star LeBron James confirmed Thursday that he won't be a part of it.

James, fresh off leading an MVP performance in the NBA Finals for the champion Cavaliers, told Cleveland.com on Thursday that he won't join coach MikeKrzyzewski & Co. in Rio de Janeiro come August.

"I could use the rest," James told the website.

Others are making a different choice.

Anthony, who has a chance to become the first men's basketball player to win three Olympic gold medals, will be making the trip to Rio, sources confirmed to ESPN on Thursday after it was first reported by The Vertical. He won gold with the U.S. in 2008 and '12, and he also won a bronze medal in 2004.

Butler, who averaged 20.9 points and 5.3 rebounds for the Chicago Bulls this season, also has committed to playing, sources told ESPN, and he's is set to be joined on the team by Lowry, The Vertical reported.Lowry averaged 21.2 points and 6.4 assists for the Raptors this season.

Lowry wasn't even on the Americans' roster pool of 31 players announced in January.

DeRozan, who is a free agent after opting out of his contract with the Raptors, has committed to playing for Team USA, sources told The Vertical. He averaged 23.5 points last season, and he played for the Americans when they won the gold medal at the Basketball World Cup in 2014.

The Clippers' Jordan averaged 12.7 points and 13.8 rebounds last season and, according to sources, has won admirers within USA Basketball for his mobility and rim protection. Detroit's Andre Drummond was another contender for the roster, but sources told ESPN that the big man is not Rio-bound.

"Let's wait until it's announced," Clippers coach Doc Rivers said of Jordan's add to the U.S. team. "But let me put it in this way: It would be terrific for him. It really would be. I think [for] some guys, the Olympics are great. Some guys, they're really good for. I think it would be really good for DJ. If everything that they're saying is true, I think it would be wonderful for him."

USA Basketball will officially announce its 12-man roster for Rio next week.

Anthony, 32, said last month that he was unsure whether he'd play, in part because of concerns over the Zika virus, a mosquito-borne illness affecting Brazil. Other Olympics athletes have expressed concern over the virus.

Kevin Durant confirmed earlier this week that he intends to play in Rio, while sources have told The Undefeated that Paul George, Draymond Green and DeMarcus Cousinshave also committed to the U.S.

Green is set to be joined by Thompson, his Warriors teammate, sources told The Associated Press on Thursday.

George, Green, Thompson, Cousins, Butler and Jordan would all be making their Olympic debuts.

San Antonio forward Kawhi Leonard announced Thursday he will not accept an invitation to play on the U.S. Olympic team.Damian Lillardwill also not be making the trip, The Vertical reported Thursday, as the Portland Trail Blazers guard continues to rehab his plantar fasciitis injury.

Warriors star Stephen Curry previously said he will not play as he recovers from ankle and knee injuries.

"This was a very difficult decision," said Leonard, the back-to-back NBA defensive player of the year. "It's an honor to have been considered for the team, and I hope that in the future I will have the chance to represent my country by playing for USA Basketball."

Krzyzewski and his staff will hold a four-day training camp in Las Vegas from July 18 to July 21, and then the team will play five exhibition games, starting July 22 against Argentina and ending Aug. 1 against Nigeria. The Olympic basketball tournament will take place Aug. 6-21 in Rio de Janeiro.

ESPN's Marc Stein, Ian Begley and Jeff Goodman, Marc J. Spears of The Undefeated, and The Associated Press contributed to this report.

After struggle with drug use, he's using his experience to help others