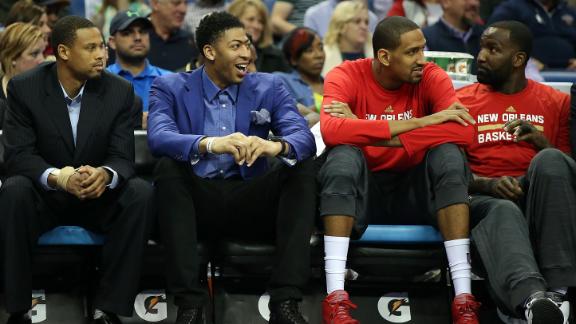 After losing Alonzo Gee and Jrue Holiday to a growing list of injured players Monday night, Pelicans coach Alvin Gentry sent out a call for help.

"I am gonna send out an all-points bulletin to anybody in the French Quarter or anywhere else," Gentry said after a 99-91 win over the Knicks at Smoothie King Center. "We need a voodoo doctor or something here. We've gotta find the bones under this place. We gotta do something. Because this is becoming comical."

Whether Gentry was serious or not, some have answered his call.

Belfazaar Ashantison, who has been a voodoo practitioner for more than 25 years and a voodoo priest in New Orleans for 14 years, told The Advocate that he believes he can fix whatever has plagued the Pelicans.

"I do believe, honestly, that they are jinxed, for lack of a better word," said Ashantison, also known as Zaar. "I think there's a negative energy that keeps surrounding them."

The Pelicans (27-46) have lost 262 games this season because of injury, and they have already shut down Anthony Davis (left knee), Quincy Pondexter (left knee), Tyreke Evans (right knee), Eric Gordon (right finger) and Bryce Dejean-Jones (right wrist) for the season.

The team announced Tuesday that Holiday suffered a fracture to his right inferior orbital wall and Gee ruptured his right quad in Monday's game. Both are done for the season.

Ryan Anderson, who missed his fifth straight game Monday, has been diagnosed with a sports hernia and will get a second opinion from a specialist in Philadelphia, according to the Pelicans. Norris Cole, out for the past 11 games with a lower-back injury, has experienced "back discomfort," according to the team, and he is officially considered day-to-day.

The Pelicans, who play the Spurs at San Antonio on Wednesday night, have used 36 different starting lineups, most in the NBA.

Ashantison works at Voodoo Authentica in the French Quarter. He told The Advocate he'd help the Pelicans "in a heartbeat."

New Orleans priestess Cinnamon Black also told The Advocate that she thought she could help.

Black performed a ritual in 2010 to break the "Madden curse," an alleged jinx for players on the cover the of the NFL video games, when Saints quarterback Drew Brees was on the cover.

Voodoo could "absolutely" be valuable to the Pelicans, she said.

Tom Benson, owner of the Pelicans and the Saints, is in a legal battle with his family, and this tumult "has caused this negativity to snowball," Ashantison said.

"The easy way around that is a spiritual cleansing," he said. "There's a number of different ones you could do."

The cleansings could include sage smudging, throwing sea salt in the corner to fight jinxes and players reciting a protective psalm.

"We did a ritual for Drew Brees," Black said. "Why not do one for them as well? They're part of our city, and we're all one big family."

ESPN's Justin Verrier and The Associated Press contributed to this report.