Why Duke, Gonzaga and 19 other ranked teams won't win the NCAA tournament 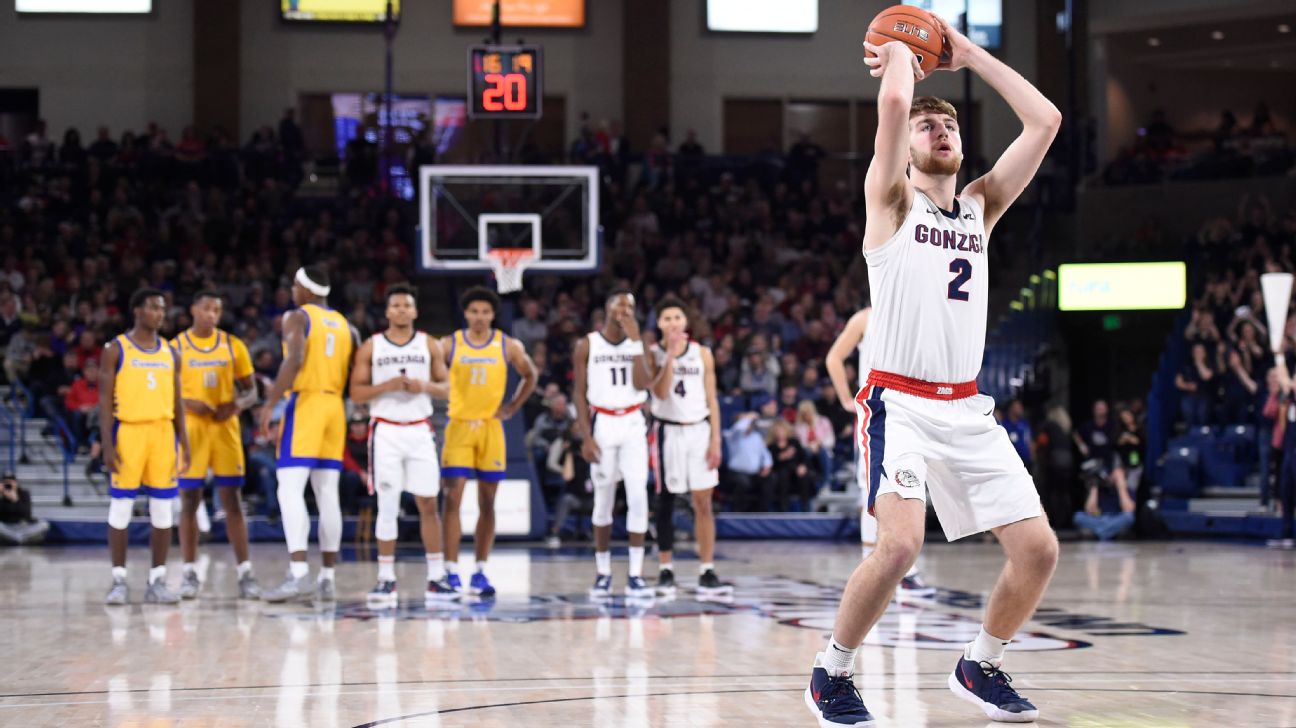 From roster construction to style of play, things are always changing in college basketball and the only thing we can realistically do is try to track the trends.

Virginia's run to glory last season helped shine a spotlight on the value of defense, and the numbers suggest that mentality is here to stay. Over the past decade (2010-2019), the average champion has ranked 56th in the country in terms of scoring defense, with the majority of champions ranking inside the top 35. In the decade prior (2000-2009), the average ranking was 118th, with half of those champions ranking 150th or worse. Think about that: Defense was a bonus in the first part of the millennium, but since, it's been a requirement.

As you might expect, the increased attention on the defensive end has resulted in less pressure to score at a crazy rate. From 2001 to 2009, every champion posted a top-25 scoring offense, something that only four of the past 10 champions have done. While you could argue that the importance in scoring volume has declined with time, the ability to make free throws has become more important. Seven of the past 11 champions ranked 51st or better in free throw percentage at season's end, something that was true for just one of the previous eight winners.

Defense and fundamentals. Boring, right? Well, I'd rather pick boring winners than exciting losers in March.

So, who fails to check the right boxes? To allow for the possibility that teams can improve in given areas over the next two months, we've lowered the thresholds to a top-100 scoring defense (something 10 of the past 14 champions have had) and a top-125 team in terms of free throw percentage (something 11 of the past 15 champions have been). Given those criteria, these are the teams you should consider removing from your NCAA tournament title pool:

Love the Zags, but they've allowed at least 70 points in seven straight and three of their top five scorers are shooting under 67% from the stripe.

John Gasaway raises a good point in citing the Blue Devils' defense as a potential catalyst to a special season, but Vernon Carey Jr.'s free throw shooting hurt them in a big way in the Stephen F. Austin loss (62% this season, 4-11 in that game), and who's to say that doesn't happen in March?

New year, same problem. Udoka Azubuike is up to 35.2% (34.4% in his nine games last season) this season and that's a major flaw. He doesn't have to be Steph Curry at the line, but he's going to need to trend closer to 50% before the Jayhawks are on my radar.

If I had to pick a team to buck this trend, it'd be the Bears, as their top two scorers are silky-smooth from the stripe (87.6%). That said, the rest of the team is converting just 60.6% of their freebies and that's going to have to change if they want to get the math nerds (I use that as a term of endearment -- I'm one of them) on their side.

J'Von McCormickaverages 11.9 points, 5.5 assists, 4.2 rebounds and 1.2 steals per game. He's one of 14 players in the nation to check all of those boxes. That's a long way of saying that he has the ball plenty, so having missed more free throws than he has made is a major issue. Understanding that, he did convert 8 of 11 in his first game of 2020, so if he sticks to that as a New Year's resolution, Auburn is a legit title threat.

Another team I tend to like, but seven games with no more than 10 free throw attempts? That's a problem if you're not converting at an elite level.

Lots to like on the Ducks' résumé, but defensive lapses like what we saw Jan. 2 in Colorado (22 FTA and 46 points allowed in the second half) make picking them to win six straight a tough sell.

Obi Toppin has impressed as much as anyone in the early going, and if his 8-of-8 free throw stretch over the past two games is a sign of things to come, it's not crazy to like Dayton as the team to beat from Ohio. For now, the team FT% is a little low, but the Flyers are trending out of this group.

If you're using free throw metrics to pick teams, you have to be willing to look at the full picture. It's a one-game sample, but Nova was outscored by 23 points from the free throw line in its 11-point loss at Marquette on Saturday. Of course, that sort of difference isn't always going to happen, especially at neutral sites during the tournament, but the fact that an outcome like that is even within range is terrifying.

I can't technically say "I told you so" because I was researching this piece at the time, but the Mountaineers were minus-7 from the free throw line in their 7-point loss on Saturday at Kansas. They rank in the bottom 100 in terms of FT%, and that's going to drastically limit their tournament run potential if not improved in a big way.

After a red-hot start, things have gotten a little more difficult for the Wolverines. The competition was stiff, but in their past two true challenges, both Oregon and Michigan State shot over 50% from the field against them and looked very comfortable in getting what they wanted.

Lamar Stevens and Mike Watkins get the Nittany Lions 27 points per game, but they combine to shoot just 62.6% from the charity stripe.

The Tigers have avoided disaster, but they've missed at least 12 free throws three times. They aren't as bad as the Derrick Rose team from the line, but they also aren't nearly as talented and may have trouble outrunning this flaw come March.

Four times this season have the Shockers failed to make even 59% of their freebies. That said, they did cash in on 18 of 20 against Oklahoma and 34 of 42 against Texas Southern. A lack of consistency at something that isn't impacted by defense is a major concern. How can you feel good about advancing them in your bracket when you have no idea which version will show up?

Want to trim things down even further? As mentioned last week, the past 11 non-UConn champions have been ranked inside the AP top 15 in both the preseason poll and the first poll of the new year.

They just make the cut in the other two categories, but they were not included in the preseason poll. They pass the eye test thus far and I'd encourage you to check them out, as two of their next three games are available on ESPN2/ESPN3.

They impressed on Saturday in Louisville and they'll have the chance to build on that win as they get Virginia twice before the end of the month. They weren't ranked entering the season, so they fall out of this metric, but they are worth tracking.

They've allowed 70 points just twice (once in a 32-point win, so not sure that even really counts) and they convert 73.1% of their freebies, but by ranking 18th in the preseason poll, they need to buck this trend to win it all. Oh, and two consecutive losses in which they failed to score 60 points aren't helping.

The defending champs have a weird 29-point loss to Purdue on their résumé, not to mention an 11-point home loss to South Carolina, but this team fits your standard UVa profile: It doesn't beat itself. Can the Cavs win six straight in March? That remains to be seen, but you better be confident in the team you pick to beat them, as this isn't the type of squad I see lying down to an inferior opponent.

They fit this mantra to a T, but a three-game losing streak a month ago has them sitting outside the top 15 in the first poll of the new year. Jarrett Culver is no longer in town, but this team is very much the type that can make a run through the bracket. This is a big week with games against Baylor and in West Virginia. If you're taking inventory of teams on a weekly basis, Texas Tech is one that could move into the "true contenders" tier Saturday night.

Their three losses have come by a combined 12 points, and if they had gotten a bounce here or there, we'd be talking about a team with more hype. They were ranked 21st this preseason and that's proved to be about right thus far, but a win in Oregon this week could elevate them to the point where they are tough to ignore.

Being unranked in the preseason rules them out of this study, but they popped onto the radar after beating Dayton on a neutral site just before the holiday break and by riding McKinley Wright IV to a win over Oregon. Did Sunday's setback against Oregon State expose them? That remains to be seen, but a team that blows a 12-point lead and had one player (Wright) record multiple assists while five players had multiple turnovers should very much be questioned.

Louisville: The Cardinals rank 124th in free throw percentage, so it's not as if they qualified for "title contender" status easily, but they are there despite consecutive losses at Kentucky and vs. Florida State. Their front line is as productive as any in the sport and if they can navigate an upcoming three-game road trip, they will be a team I'm looking to buy stock in after bowing out in the first round last season.

Maryland: The Terps safely qualify in both statistical metrics, and their only two losses have been nail-biters on the road. We will learn plenty about them this week (OSU and Iowa), but this team continues to check boxes as we approach the middle of the season. You may have heard: Both Louisville and Maryland checked off another box in the early going.

Michigan State: The Spartans haven't been as overwhelming as we projected this preseason, but they are doing everything they need to. They handled Michigan rather easily Sunday by holding it to 36.2% shooting from the field and making more free throws than the Wolverines attempted. I'm not comfortable picking the Spartans to lose right now.