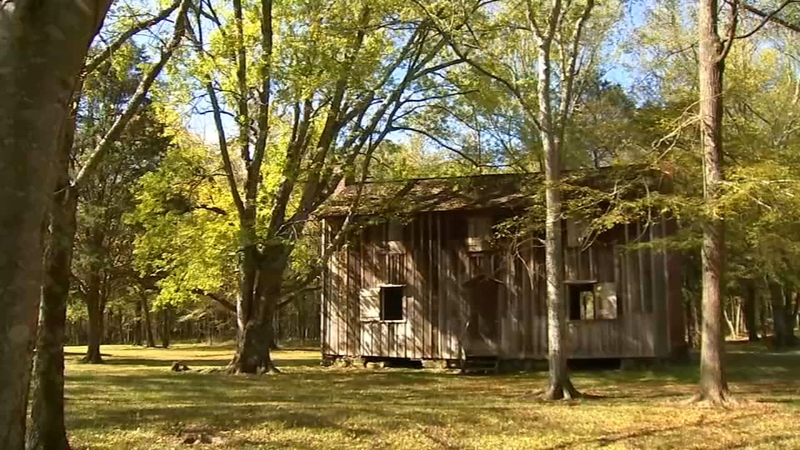 DURHAM, N.C. (WTVD) -- Stagville Plantation in Durham was one of the largest slave plantations in the South.

Nine hundred Africans were enslaved across the plantation's 30,000 acres of land; slaves built their own homes on this property.

Each home has four rooms. There were eight to 10 people who lived in each room, according to curators who manage the historic state site.

The Holman slave quarters were named after an enslaved family who lived here against their will back in the 1800s.

"In many ways, I can touch what they've touched," Georie Holman Bryant first visited the site on a fifth-grade field trip.

But in 2017, the 36-year-old learned his family is deeply connected to the plantation.

His great, great grandfather, Willie Holman, and other relatives were born into slavery at the Stagville Plantation.

"I feel angered, I feel saddened. I have a sense of pride around knowing where they are from. I feel loved as well," said Holman, who said he visits the site where his ancestors lived to meditate. "I talk to the trees. I use it as a space to communicate with them."

Stagville Plantation dates back to the 1700s, as a wheat, corn, rye and textile farm owned by the Bennehan and Cameron families who profited from this free Black labor.

Khadija McNair is a curator for the historic site, she says Black slaves were beaten regularly and even raped.

One of those survivors, Mary Walker, was a mixed-race slave.

"She writes letters after she is freed and she alludes to sexual violence and being a victim of sexual violence in her letters. We know that she leaves behind three children here," McNair said.

Although the story is heartbreaking, McNair says it is what keeps her going and is sharing the resilience of these slave families.

After emancipation, some stayed on the property as sharecroppers.

Others turned their skillsets in carpentry, masonry and textiles into thriving businesses.

"The Hart's for example started a store in this building. Eventually, one of the son's of the Hart family moves that store into Durham and onto Black Wall Street," said McNair.

Today, a lot of Stagville Plantation's property has been sold and transformed into an industrial hub along Old Oxford Road.

One-hundred and sixty acres remain to tell the story of the enslaved; their struggle and triumph.

"I know in many ways their blood that was shed is not in vain," Holman. "Their experiences were about my survival."