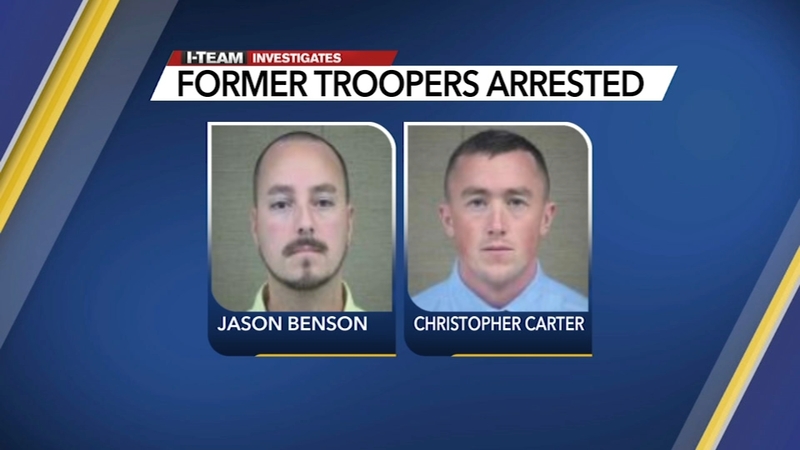 The investigation began in June 2019 at the request of Highway Patrol and the Harnett County District Attorney.

He was fired during the summer.

Former Trooper Christopher Carter, a five-year veteran, has been charged with two counts of obstruction of justice, two counts of failure to discharge duty and two counts of making a false return of process.

He was placed on administrative leave at the same time Benson was fired.

During the investigation, State Bureau of Investigation special agents identified more than a dozen victims who had been issued citations or charges unbeknownst to them.

"The actions of these two former troopers, as substantiated by our internal investigation, is inconsistent with the Ethical and Organizational Values of the Highway Patrol and does not reflect the high standard of conduct to which all SHP employees are held accountable," said Colonel Glenn McNeill, Jr.

Most of the citations stemmed from single-car accidents or abandoned vehicles.

In some cases, the two troopers charged people but then didn't serve the citation.

The victims didn't know they had been charged, therefore they didn't show up for their court date. As a result, arrest warrants were issued for some while others had their driver's licenses suspended.
Report a correction or typo
Related topics:
ncstate trooperssbimisconductnc highway patrolinvestigation
Copyright © 2022 WTVD-TV. All Rights Reserved.
TOP STORIES
Snow likely to start around midnight, last until sunrise
How many times can I reuse my N95 mask?
10 injured when bridge collapses in PA; human chain formed to help
Decades after TV anchor disappears, convicted rapist denies connection
What is antisemitism? Explaining anti-Jewish ideas and hate
Holocaust survivor, great-grandson educate next generation on TikTok
LATEST: Breakthrough cases make up 37% of new COVID infections
Show More
Essentials to keep in your car during winter storms
Former NCSU footballer Torry Holt named to NC Sports Hall of Fame
Epic Fun Park to open this summer in Fayetteville
'Tiger King' Joe Exotic set for resentencing in Oklahoma
Durham police issue warrants for suspects in hit and run crash
More TOP STORIES News