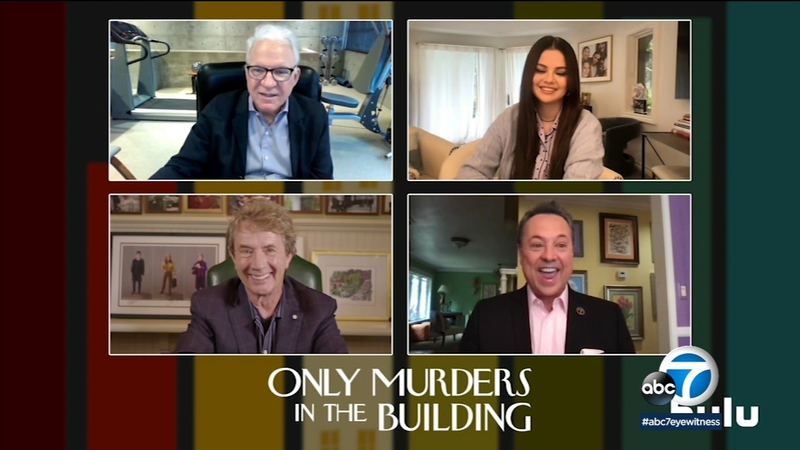 Martin, Short, Gomez star in 'Only Murders in the Building'

HOLLYWOOD -- Longtime friends and collaborators Steve Martin and Martin Short are back together again, this time with Selena Gomez in the mix. It's for a new comedic murder-mystery series about three people obsessed with true crime stories.

In "Only Murders in the Building," the three stars play strangers who take it upon themselves to join forces to investigate and solve a crime that happened in their building. From start to finish, the series will leave you guessing.

"I was 1,000 percent guessing! And we didn't actually know the ending until much later," said Gomez.

"I love mysteries and I really like to watch mysteries. And, you know, the more they can fake me out, the more I like it," said Martin.

"And on this project, I think everyone's done the top work, maybe, of their careers," said Short.

Watch the trailer for Hulu's "Only Murders in the Building," starring Selena Gomez, Steve Martin and Martin Short.

I asked Short about rumors that he was making people laugh during scenes... sometimes requiring multiple takes.

"Well, first of all, if you're implying that I'm not a total pro, how dare you! And, yes, that's true," said Short.

"It was written as a very dry, sarcastic, very blunt young woman. But it was so much fun," said Gomez. "We got to just--I felt like the more I was, like, playing Mabel, as the episodes were going, I just morphed into her!"

"Chemistry is not a natural... You would think Marty and I would have good chemistry because we worked together for 35 years. But that's not necessarily true on camera. You can have married couples who have no chemistry," Martin said. "So the chemistry I feel the three of us have is good luck!"

"Only Murders in the Building" is now streaming on Hulu, with new episodes dropping Tuesdays.