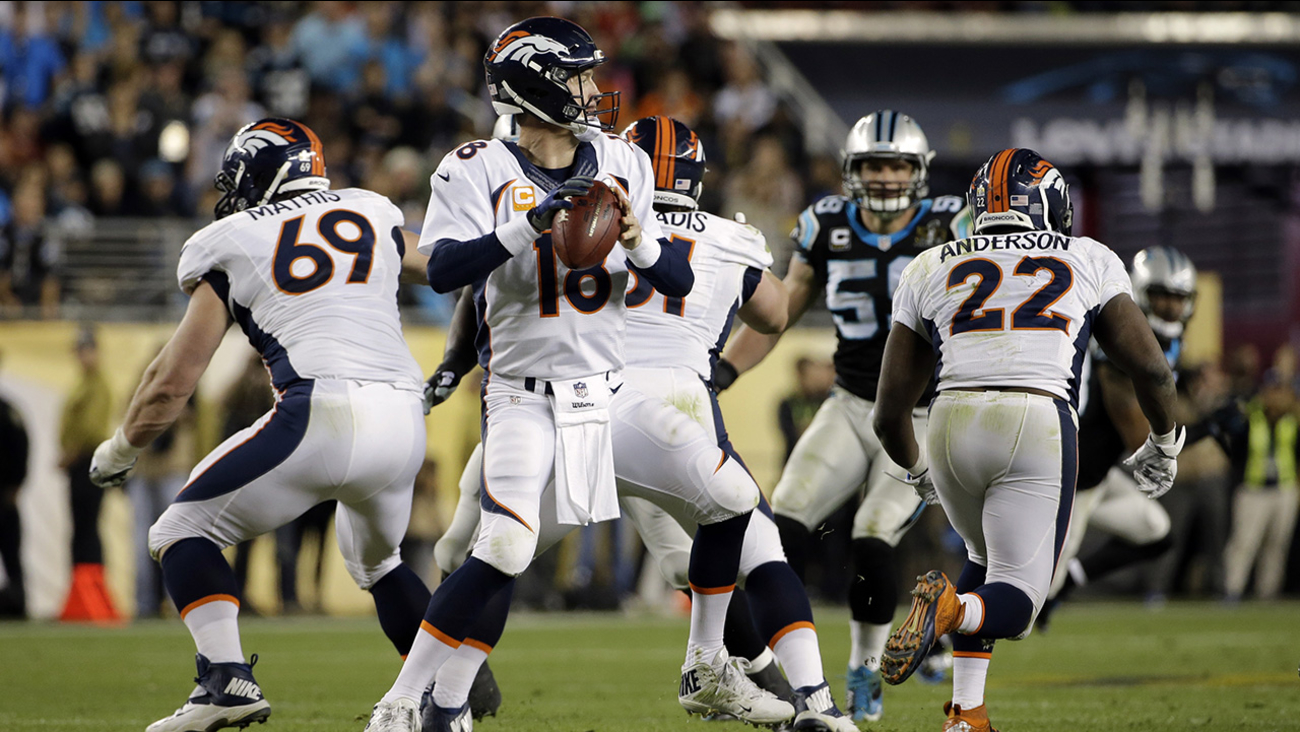 SANTA CLARA -- With his prolific passing and complete control of the game at the line of scrimmage, Peyton Manning helped usher in the NFL's wide-open era of high-scoring offenses and pass-happy game plans.

Manning's possible farewell game in Super Bowl 50 was a throwback to the 1970s when his father Archie was running away from dominant defenses such as the Steel Curtain and Doomsday.

Von Miller forced fumbles that set up both of Denver's touchdowns, led a defense that harassed MVP Cam Newton and helped carry Manning to his second Super Bowl title with a 24-10 victory over the Carolina Panthers on Sunday.

We’ll be back even stronger next season. Thank you for being part of this #PantherNation. #KeepPounding pic.twitter.com/7qcIbQZmfi

For so many years, Manning's career was defined by his gaudy regular season numbers that weren't enough come playoff time. A lack of help from teammates or the inability to thrive against stellar defenses from teams such as New England and Seattle left Manning with just one Super Bowl title in his first 13 playoff trips.

So perhaps it was fitting that after carrying teammates for most of his career, he was carried over the finish line in this game by Miller and the coordinator Wade Phillips' "Orange Rush" defense.

"I certainly knew that (with) this defense, this team would have a chance," Manning said. "Our defense has just been, from the get-go, they've been nothing but awesome. Being hurt and struggling early in the season wasn't a lot of fun so I was grateful to get back healthy and to try and play my part these last couple of weeks."

But now after throwing for more yards, more touchdowns and winning more starts than any other quarterback in NFL history, Manning could be ready to hang it up. Manning wouldn't say after the game whether this was his final one.

"I got some good advice from Tony Dungy," Manning said of the first of four coaches with whom he's been to the Super Bowl. "He said, 'Don't make an emotional decision.' This has been an emotional week, an emotional night. I'm going to take some time to reflect."

Miller set the tone early when he blew past right tackle Mike Remmers and ripped the ball out of Newton's grasp. Malik Jackson recovered the ball in the end zone for a touchdown to put Denver up 10-0.

Then in the fourth quarter with the Broncos protecting a 16-10 lead, Miller struck again. Once again, he got around Remmers and knocked the ball out of Newton's hands. T.J. Ward recovered at the 4 and C.J. Anderson sealed it with a TD run.

"In my opinion, we're the greatest defense to ever play the game," linebacker Brandon Marshall said. "Ever. It's a bold statement but top to bottom, we have the greatest talent - from rushers to safeties to linebackers. Better than anybody's ever done it."

After knocking off former Super Bowl champions Ben Roethlisberger and Tom Brady to make it here and then holding Newton and the NFL's highest-scoring offense to its lowest point total of the season, the Broncos stated their case to stand next to Pittsburgh's Steel Curtain defenses of the 1970s, the dominant 1985 Chicago Bears, the 2000 Baltimore Ravens, the 2002 Tampa Bay Buccaneers and the 2013 Seattle Seahawks on the list of top defenses.

"This is the rawest defense ever. Ever," Denver tight end Owen Daniels said. "To do that to the guy that's changing the game, unbelievable. Our defense, you have to put them up there with the best ever."

The Panthers defense was just about as stingy, but couldn't come up with the game-changing turnovers that Denver provided. Carolina held Denver to 194 yards - the fewest ever for a Super Bowl winner - and didn't allow a first down on eight of 14 drives.

Wow. Cam sacked:fumble for a Denver TD. Broncos are off to a Pantheresque start.

But it wasn't enough.

"It's so gut-wrenching and hard to swallow that," All Pro cornerback Josh Norman said. "There were chances and opportunities there and we just didn't capitalize on them."

Newton, who threw for 38 touchdowns and ran for 12 in his first 18 games, produced no touchdowns for the first time all season. Denver tied a Super Bowl record with seven sacks and frustrated the player nicknamed Superman.

It didn't help that Newton's receivers dropped passes and the running game never got going against Denver's stout front.

"They made more plays than us and that's what it comes down to," Newton said during a brief three-minute interview. "We had our opportunities and it was nothing special that they did. We dropped balls. We turned the ball over. We gave up sacks. We threw errant passes. That's it."