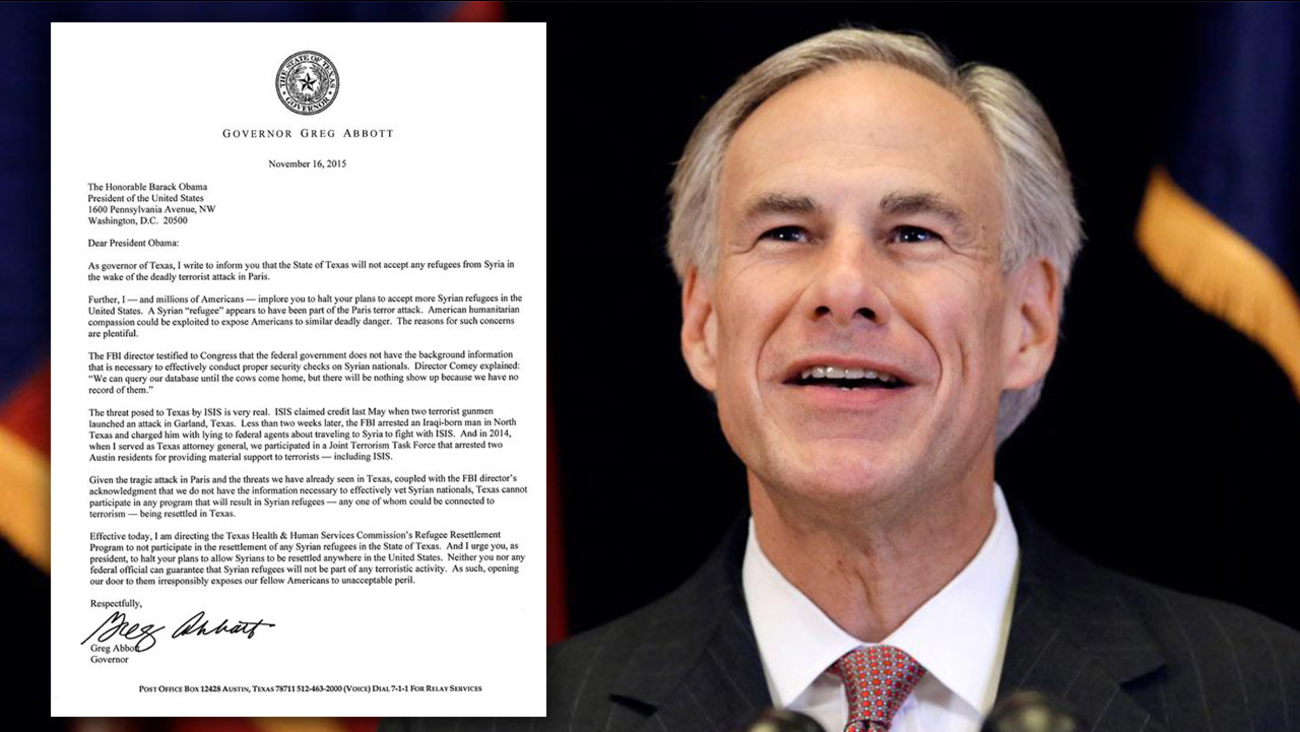 Governor Greg Abbott is joining several other US governors who are halting efforts to allow Syrian refugees into their states in the aftermath of the terrorist attacks in Paris.

AUSTIN, Texas -- Texas Gov. Greg Abbott is joining several other US governors who are halting efforts to allow Syrian refugees into their states in the aftermath of the terrorist attacks in Paris.

Abbott sent a public letter to President Obama saying the state will not accept any refugees in the wake of the deadly terrorist attack in Paris. Abbott says he's responding to heightened concerns that terrorists might use the refugees as cover to sneak across borders. One of the attackers in Paris had a Syrian passport, and the Paris prosecutors' office says fingerprints from the attacker match those of someone who passed through Greece in October.

"Texas cannot participate in any program that will result in Syrian refugees - any one of whom could be connected to terrorism - being resettled in Texas," the letter reads.

"The threat posed to Texas by ISIS is real," the letter reads. "ISIS claimed credit last May when two terrorist gunmen launched an attack in Garland, Texas. Less than two weeks later, the FBI arrested an Iraqi-born man in North Texas and charged him with lying to federal agents about traveling to Syria to fight with ISIS."

According to the Texas Tribune, since more than 120 Syrian refugees have already resettled in Texas since Oct., 2014.

Abbot's effort to stop further refugees from settling in Texas joins similar efforts from the governors of Michigan, Alabama, and Louisiana.

In Michigan, which has a large Arab-American population, Gov. Rick Snyder had bucked many fellow Republican leaders by welcoming refugees. But he said Sunday that the state is postponing efforts to accept refugees until federal officials fully review security procedures and clearances.

Fellow Republican Gov. Robert Bentley announced Sunday that he would refuse Syrian refugees relocating to the state, saying: "I will not stand complicit to a policy that places the citizens of Alabama in harm's way." Bentley's news release said the Alabama Law Enforcement Agency was diligently working with federal officials to monitor any possible threats.

And Gov. Bobby Jindal - a GOP presidential contender - said he wants more information from the White House "in hopes that the night of horror in Paris is not duplicated here." He also wants to know the extent of background screening before Syrians entered the U.S. United States as well as what monitoring would be done once the refugees make it to Louisiana.