'Bachelorette' Clare confronts the guys on her first group date

NEW YORK -- Clare was feeling great after her first night meeting the men, but mostly her mind was on Dale. Chris Harrison greeted the group and dropped off the first date card. It read, "Riley, Jordan, Yosef, Ivan Ben, Bennett, Zac C., Zach J., and Dale, I'm looking for a guy who speaks to my heart. Clare said she specifically put Dale on her very first date because she couldn't wait to see him again. I'm somewhat shocked she didn't give him a one-on-one date!

They went to a set where Clare climbed up into a fake balcony and asked the men to use their "love languages" to speak to her. They gushed about how they wanted to get to know her and work hard to be with her and blah blah blah. Just to add a little bit of pressure they had to say it all in front of each other. Dale spoke about her energy and spirit and she seemed pleased with what he said. "It's been a long time since I've heard so many kind things from men," Clare said through some happy tears. 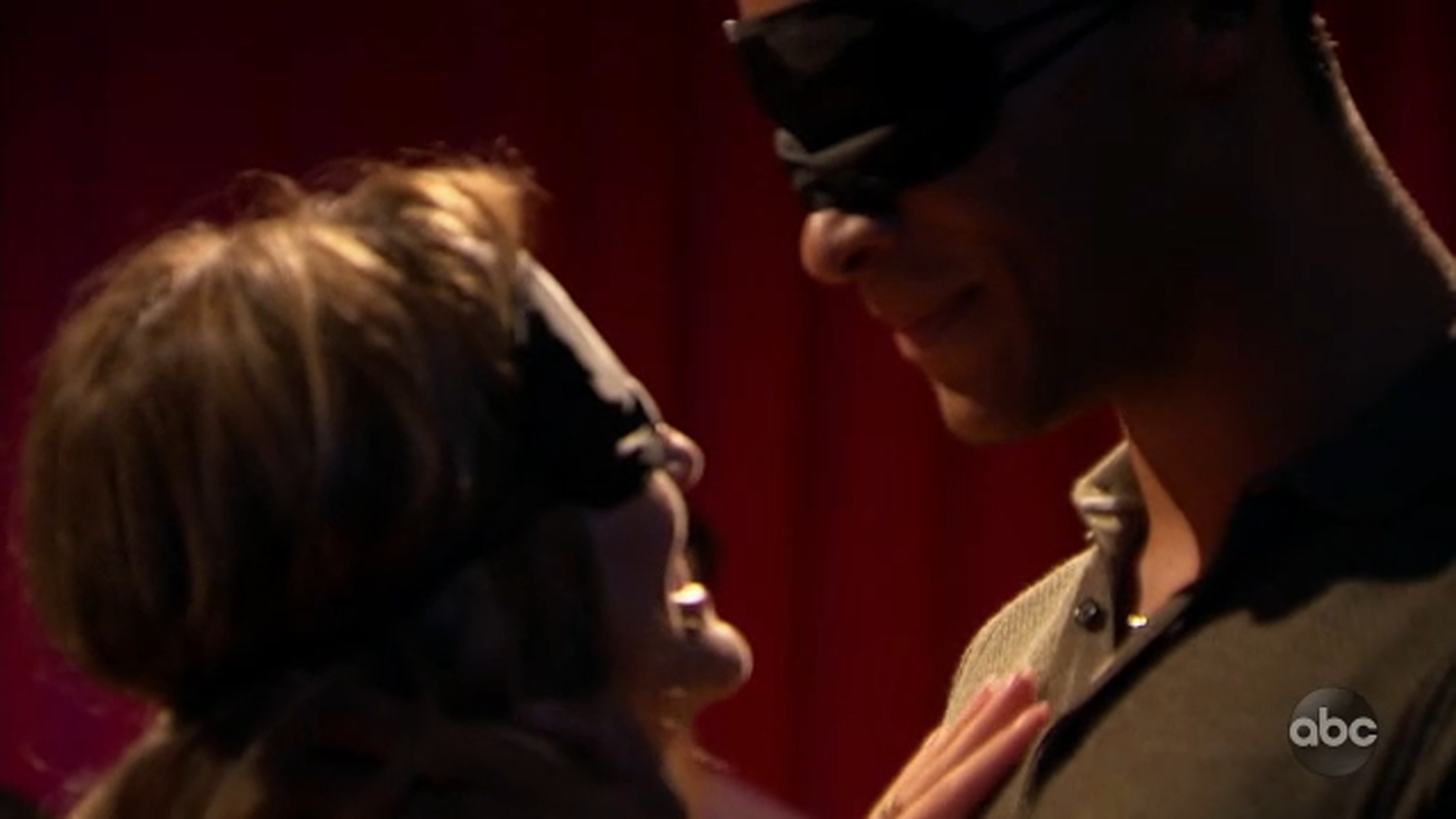 The men were sent to run back to their rooms to find something to give to Clare as a "gift." They were little items that meant something to them like a chess piece, a game ball, their favorite t-shirt, perfume for dogs (from Dale) among other things. The next love language was physical touch! There were a lot of touchy-feely hugs that made most of the men super uncomfortable. But, OMG as soon as Dale walked up it got VERY intense. Even the other men felt they were "touching on a deeper level."

At the after-party, none of the men jumped up to chat with her right away. I think they were all feeling a little shy and trying to be respectful of each other. Bennett stepped up and talked about how he lived in New York, went to Harvard and Clare stopped their conversation. She was too upset about how the guys didn't jump at the chance to talk to her. So she went outside and scolded them for not treating her "like a woman" and Yosef tried to "speak for the group" to apologize and smooth things over and inadvertently called her "crazy" for thinking that they all weren't there for her. Before the fight could go any further, Dale asked Clare to go and talk, which of course she agreed to do. But, what about Bennett? Isn't he still waiting for her to finish their conversation? As they walked away, Riley kept telling Yosef not to speak for him. He's not there to make friends, that's for sure!

Dale told Clare that he didn't want her to feel bad about what happened and he did his best to set her at ease. She told him that he "scares" her because of how she already feels about him. Clare told him that she already has feelings for him. He agreed and they spent some time kissing.

There was a scene where she talked about not being the prettiest or skinniest girl in the room and deserving love with Zac C. and it was just like, you can't be serious. Has she looked in the mirror or watched her promos? Riley apologized to Clare for not jumping up when she first walked in and they had a dance, high school prom style. He asked her what she wanted in a man and before she could finish he kissed her. At the end of the date, she gave the group date rose to Riley. Dale was disappointed he didn't get the rose, but he took it all in stride.

Clare's first one-on-one date was with Jason. The card read, "Love will set us free." She wrote a letter to him before they left for their date and asked him to write a letter to his younger self, and she would do the same. He's not very comfortable with his emotions, so he said that this date will be a challenge for him. They walked outside and she told him that they would practice letting go, so they screamed together. Then, they wrote down things that they heard or thought about themselves that they want to let go. 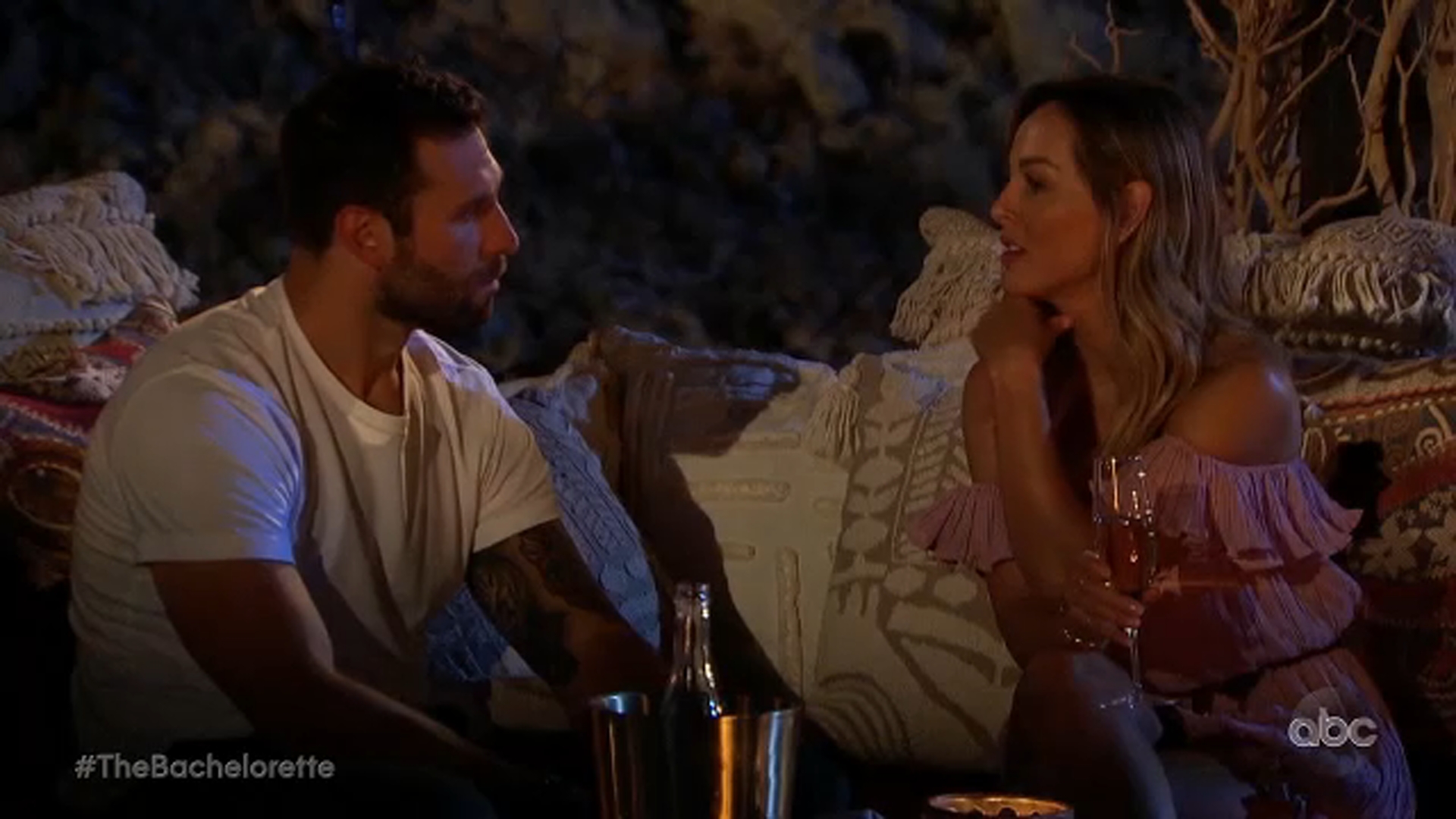 Finally, they read the letters to their younger selves. He revealed that he has a dark past, and Clare understandably wanted to know what on earth his letter to himself meant. He told Clare he used to be a player, manipulative, selfish, but he doesn't want to push people away anymore and he wants to find love. He said that he and his brother saw things they shouldn't have seen. His parents have been married 35 years, but he said that they probably shouldn't be together. Was anyone else worried Jason was a secret murderer or something? Clare gave him the date rose and then made out with him. He said she was one of the most beautiful and powerful people he's ever been around. Then, she took the dress she wore during her season finale breakup with Juan Pablo. She threw it in the fire! You go girl!

"I'm looking for a man with some balls," read the last group date card. Well, boy did she mean it. Clare brought the guys to a dodge ball arena. They had some fun playing around, but yikes, they were really whipping it! Chris Harrison came out, blew the whistle, and then announced there would a tournament where the winners would get to spend the after-party with Clare and the losers would have to go home. 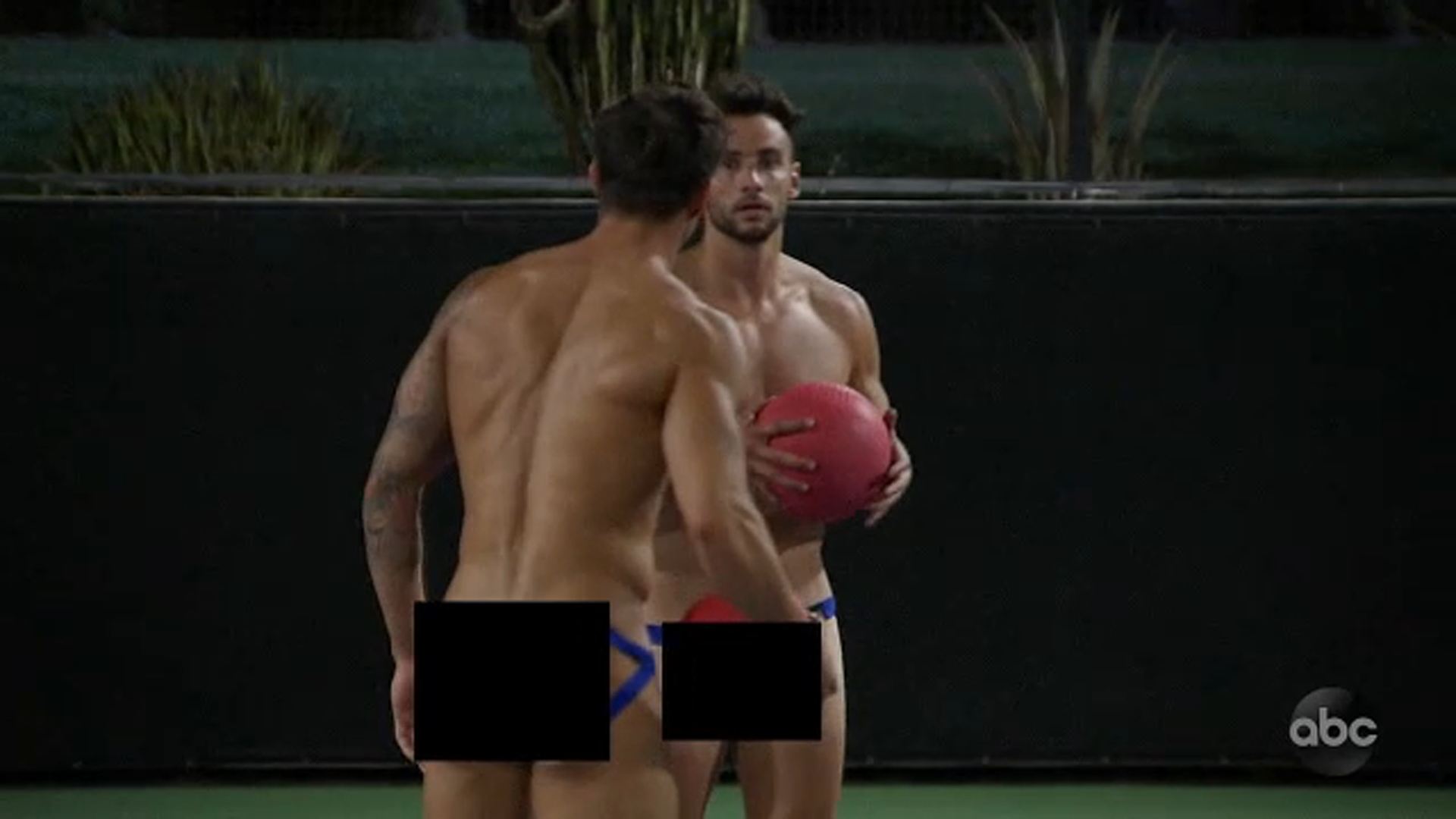 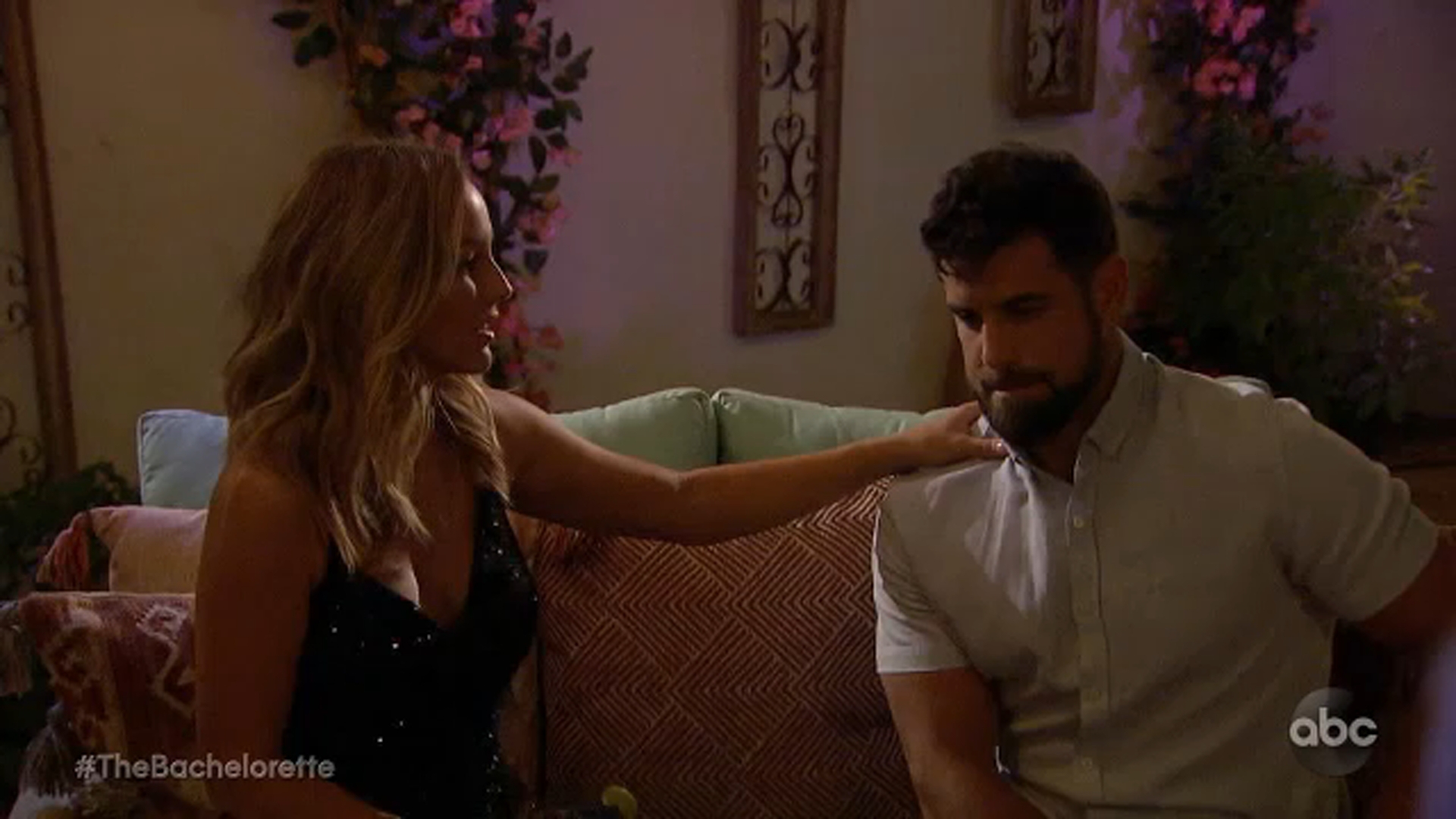 The red team continued their date into the evening, and Eazy jumped at the chance to chat with her. He gave Clare a foot massage while telling her everything he appreciates about her. Some much for Canadians being the nice guys...Blake Moynes is a rule breaker! He walked over and crashed the date despite being a blue team loser! "I came here and I really wanted to show balls," he told Clare. After a few minutes, Jay who got interrupted and the rest of the men walked over and interrupted Blake. Clare told them to give her a few minutes. She told Blake that she didn't want to make the other guys upset and told him she appreciated him coming. He went in for a kiss and she told him no!

Brandon threw a bit of a fit to Clare, but she redirected it into talking about why he wanted to date her. He said that he wanted to get to know her because she's beautiful and that's why he signed up. He couldn't pick out one other reason why he wanted to come meet her! So, she sent him packing. It was incredibly awkward because he couldn't think of one thing he liked about her other than her looks. Clare gave the group date rose to Chasen.

Yosef was sounding off back at the resort about how he has a bad taste in his mouth about the strip dodgeball date. He thought it was "classless". Sounds like he wants to go home. At the start of the rose ceremony cocktail party, Clare thanked the blue team for being good sports during the game. As one man tried to pull her aside, she said that she'd actually like to talk to Blake Moynes first. She felt bad about how they left things so she gave him a rose! Wow! You could see the weight lifted off his shoulders and heart. Then she gave him a kiss and said that wanted him to be there. The other men were shocked but said, well guess all bets are off, do what you got to do to get a rose!

Clare spoke with Dale and said that she's hasn't forgotten about him. He told her that there's a deep attraction. He said that anytime he's needed something out of a relationship, he has been left high and dry. Clare said that she has felt the same way. She cried about her mom, and Dale said that she isn't meant to go through life and the pandemic alone. Clare told him that she couldn't wait to see him so she put him on that first group date. She took out the blindfold from the first date and surprised him with some more "physical touch" time.

They didn't get to the rose ceremony, so I guess we'll see the conclusion next week. The preview showed one man storming off, Clare crying, and everything just blowing up. Will that happen next week, the week after, who knows! Stay tuned Bachelor Nation.