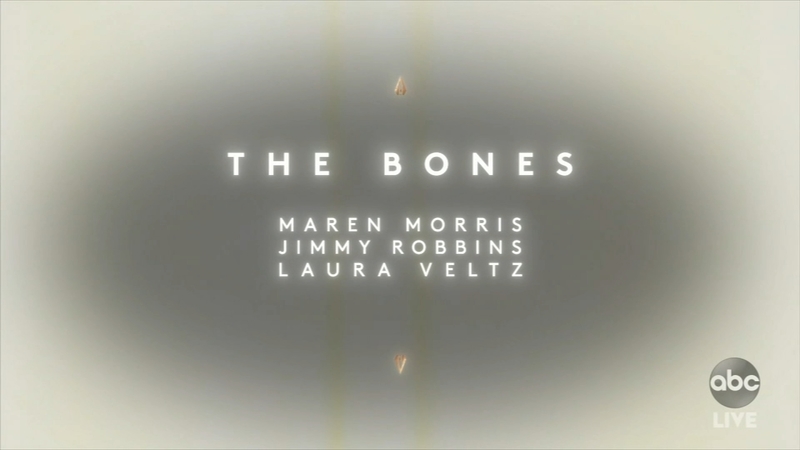 RALEIGH (WTVD) -- During the biggest night in country music, "The Bones" by Maren Morris -- co-written by Raleigh native Jimmy Robbins -- took home both the Song of Year and the Single of the Year title from the 2020 CMA Awards.

"This is one that I've always wanted to be up for it," Robbins said. "It means a lot to me, just as a writer. Not every category goes to the songwriter, even if it's a song that you've worked on."

Robbins said he wrote the song along with Marren Morris and Laura Veltz in an hour-and-a-half to two-hours.

Veltz came up with the song title when a realtor kept saying "the bones are good" about houses, Robbins said. Morris had the first line, "We're in the home stretch of the hard times" and Robbins had the signature guitar line.

Robbins' mother passed away when he was 14. He said it led him into a dark place.

"When my mom got sick, she had early-onset Alzheimer's, and all diseases are difficult but that one is pretty dark and I sort of retreated into myself and found writing and playing to be an escape and shortly after my mom passed away, I was really in a mess, like depression, and kind of all over the place."

He ended up dropping out of Sanderson High School in ninth grade to pursue a music career.

"Music saved me," Robbins said. "So I think dealing with my mom's illness pushed me into music and then music, also, it was the cure for it for me too."

Robbins has worked with artists such as Jason Aldean and Blake Shelton. As for which artists he'd like to work with, he said fellow North Carolinians Eric Church and Luke Combs, both nominated for Entertainer of the Year.