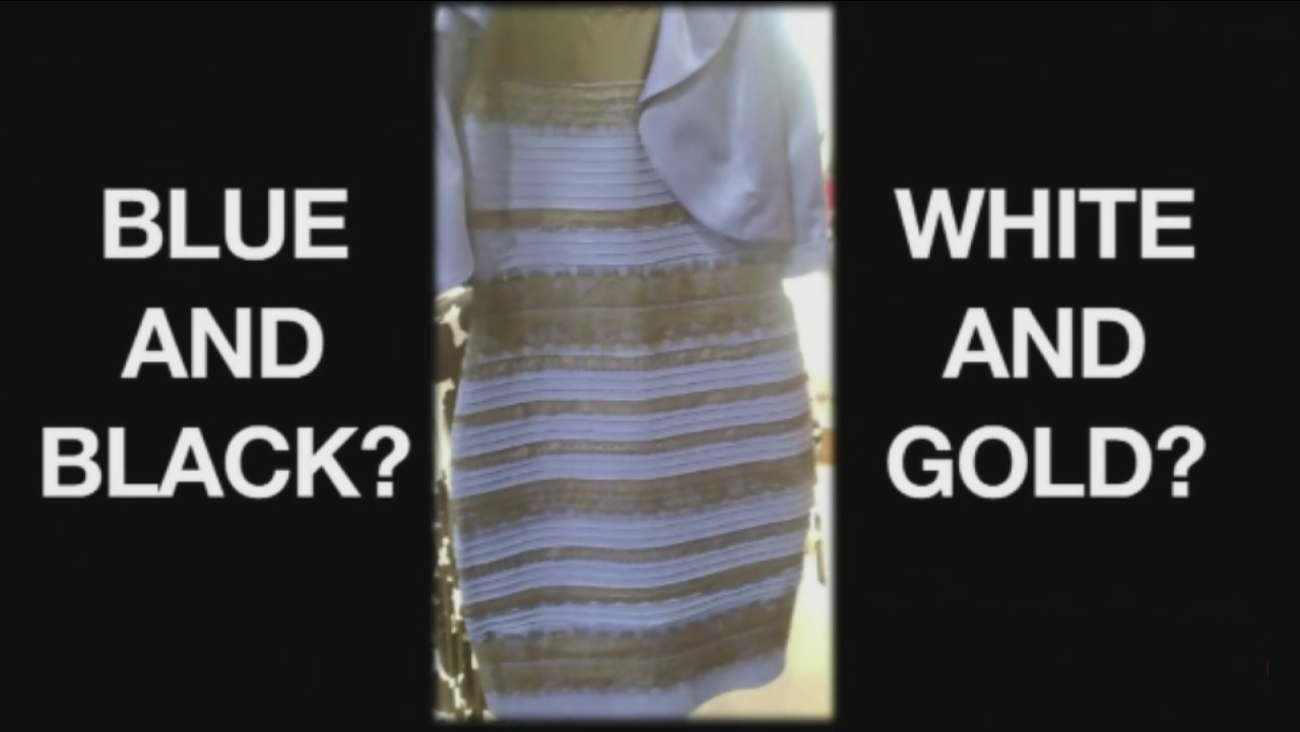 KTRK
It may go down as one of the biggest questions of 2015: Is The Dress white and gold or is it blue and black? It turns out, the answer may be that it's both.

We reached out to several professors of psychology who study neurology, specifically visual perception and the brain. Who better to explain it than scientists who have written papers on how we perceive colors?

They also seem to agree that The Dress is pretty fascinating, though they were divided on its importance. Pasacal Wallisch, clinical assistant professor at New York University, said it could be considered the "duckrabbit of colors," in reference to the famous picture that can be seen as either a duck or a rabbit.

Here's what's going on, according to our experts:

Explanation 1: It depends on which part of the picture you focus on

Don't look at the dress, look at the background, the contrast is completely different... pic.twitter.com/ybPFYDNXRW

Alan Gilchrist, Professor of Psychology at Rutgers University
What colors do you see in The Dress? "I see only the white/gold version, not the blue/black version."
How do you explain The Dress? "I believe that some people see the dress as its own frame of reference, ignoring the bright background seen to the right. Within the boundaries of the dress itself, the highest luminance is anchored at white, leaving the darker color as gold. Other people seem to see the dress within a framework that includes the brighter and more yellowish background, visible to the right of the dress. For those people, the white anchor is the bright region itself. Relative to this anchor, the "white" part of the dress is no longer the highest luminance, and it is seen as bluer than the background. Likewise the gold is changed into black."

Explanation 2: It depends on how you perceive the light source

Here is the pictures of the dress you can clearly tell the color difference is because of light pic.twitter.com/XmKVvxSlZ2

Pascal Wallisch, Clinical Assistant Professor, New York University
What colors do you see in The Dress? "White and gold. And I can't make it switch. I can see pale blue and gold if I force myself."
How would you explain it? "Those who interpret the dress as illuminated by a blue light will discount for this and see it as white/gold whereas those who interpret the illumination as reddish will tend to see it as black/blue."
Read more on The Dress by Dr. Willisch.

Explanation 3: A photograph can distort the color we see
Steve Palmer, Professor of Psychology, UC Berkeley
What colors do you see in The Dress? "I see the dress only one way: as a white-and-gold dress that is being illuminated by indirect blue light reflected by blue surfaces behind the camera. I cannot see it as black and blue."
How would you explain it? "The wavelengths of light that are reflected by its surface, in turn, depend on two further factors: The wavelength-reflective properties of the surface they strike (and) ... the wavelengths of light that strike its surface. ... It is very difficult from a photograph to separate out these two factors...(in real life) Sunlight would illuminate the dress with all wavelengths of light equally, allowing people to see the 'true' colors of the dress."

Explanation 4: It might be an optical illusion whose appearance depends on how you piece together the pixels, the same way the lines of Necker's cube can be interpreted in different ways.

The dress is exactly like this necker cube pic.twitter.com/5vk1W81QNn

David Brainard, Professor of Psychology, University of Pennsylvania
What colors do you see in The Dress? "I saw it as blue and black the first time and as white and gold ever since."
How would you explain this theory? "There is considerable variation in the pixels within each nominally uniform region, so that a different 'parsing' of the background could emphasize some over the others."
What is the significance if this hypothesis is right?"An understanding of either sort of bistability, if that's what this is, would be really cool, particularly if we could figure out how to create and manipulate it in the images."

Note: The explanation attributed to each scientist was the one they elaborated on the most. Several scientists offered multiple explanations.