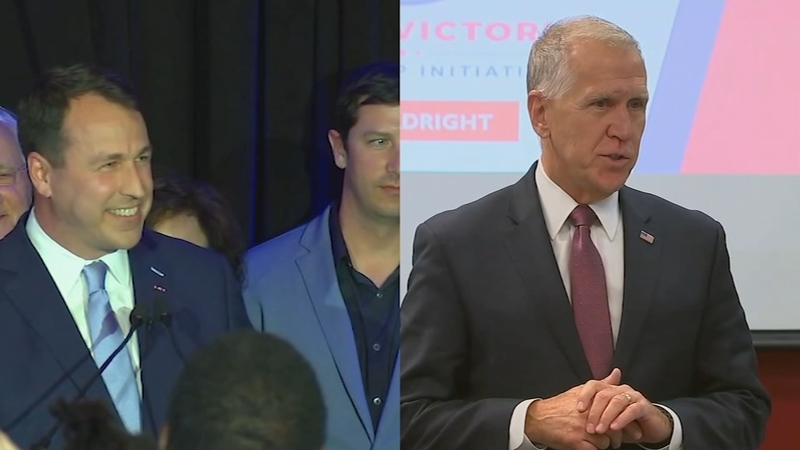 RALEIGH, N.C. (WTVD) -- North Carolina's role in electing a the president is hardly the only factor making the 2020 election a Super Bowl of American politics.

Control of the Senate is also up for grabs, and North Carolina is a key battleground in both of those fights.

Indeed, the contest to become U.S. Senator representing the Tar Heel State is now the most expensive contest in the nation, surpassing $200 million, as incumbent Thom Tillis, a Republican, fights for re-election and retaining the GOP majority in the Senate.

The significance of that seat, which is being challenged by Democratic candidate Cal Cunningham, has been on full display this month with President Donald Trump's nomination of Judge Amy Coney Barrett to the Supreme Court.

"She was extraordinary," Tillis said Friday in an interview with ABC11. "I think there will probably be instances where she'll rule in a way that will frustrate conservatives and frustrate liberals, because she refuses to be a legislator. She is a good judge I feel will be good for the institution of the Supreme Court."

Barrett made it through committee vote, so she now just needs to get 50 votes from the full Senate to join the court and fill the seat vacated by the late Justice Ruth Bader Ginsburg, a liberal pioneer and legal icon.

"The Democrats have used this as a platform for (Barrett)'s going to Washington, she's going to the Supreme Court with an agenda, and I just absolutely reject that concept," Tillis asserted. "As if the Supreme Court can wake up one morning and say, 'What are we going to overturn?'"

The Court, however, will be hearing a case challenging the legality of the Affordable Care Act (sometimes referred to as Obamacare), which Tillis has long opposed, though on Friday he insisted he does support some of the ACA's most popular provisions.

"I have voted five times to protect pre-existing conditions, and I have authored a bill to do just that," he said. "I think the court will say we believe you've passed something unconstitutional, or segments of it, now we'll put pressure on Congress to come back and vote again to protect pre-existing conditions, to allow people to stay on their parents plans, to create high risk pools, all things we know we need to do."

Democrats hoping to defeat Tillis have tried to prioritize health care as a key issue in the election. Analysts consider the issue a key reason why Tillis still trails Cunningham in many polls--albeit the polls remain close and within the margin of error.

"In the middle of a pandemic, Senator Tillis is more concerned with efforts to take away North Carolinians' health care coverage and pre-existing condition protections than doing his job and securing badly-needed COVID relief," Cunningham said in a statement to ABC11. "As unemployment numbers and COVID case counts rise, I'm talking to voters and joining their calls for Congress to come to an agreement and get relief to North Carolinians. Senator Tillis, meanwhile, is rushing through a Supreme Court nominee who is hostile to the health care interests of North Carolinians, because he's too weak to stand up to his own party and do what's best for the people of our state."

Cunningham is talking to voters and answered a few questions for ABC-affiliate WSOC. Though he refused to answer questions about his extramarital relationship, for which he has apologized, he discussed healthcare and said he would "lift up the voices of the people of North Carolina."

Cal Cunningham stressed health care as a major focus of his campaign.

"He looked in the camera and said, 'The Truth Still Matters' and 'Honor Matters' and he's not been truthful or honorable," Tillis argued. "Infidelity should matter, and it's a shame that some have been guilty, but in Cal's case, this is not something that he just need to reconcile with his family. This is about a campaign that in his ads are 'truth and honor.'"
Report a correction or typo
Related topics:
politicsraleighthom tillissenatevote 2020nc20202020 presidential election
Copyright © 2022 WTVD-TV. All Rights Reserved.
TOP STORIES
Snow, then icy conditions as winter storm moves over central NC
Roads began to deteriorate as snow, ice accumulate
Delta flight slides off runway after landing at RDU
City, county governments close services as wintry weather hits NC
LATEST: Deadline extended for House Wake COVID relief program
Raleigh Police investigate after man shot
Ford recalls 200K cars because brake lights can stay on
Show More
Laundrie claimed responsibility for Petito's death in notebook: FBI
US confirmed 1st COVID case 2 years ago today
Louie Anderson, Emmy-winning comedian, dies at 68
How to drive on snow, ice and get out of a skid
Raeford man killed in Fayetteville motorcyclist crash
More TOP STORIES News