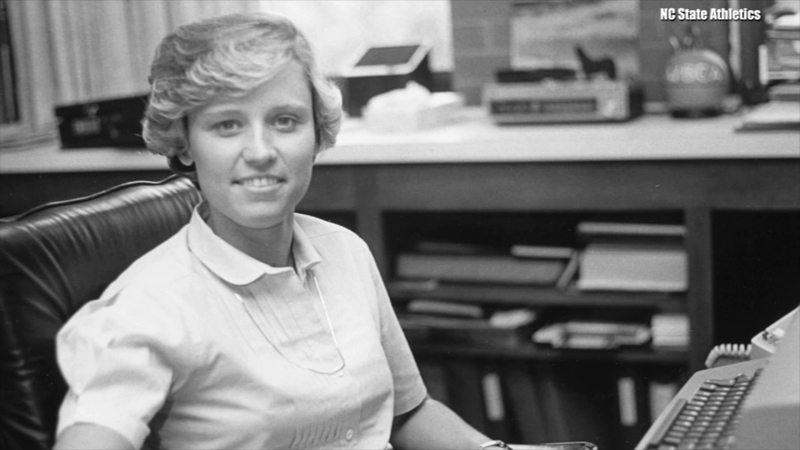 RALEIGH, N.C. (WTVD) -- Nora Lynn Finch may have left her role as an assistant at NC State University years ago, but her ties to the school remain deep. It was why when we met on a sunny afternoon in front of the Bell Tower, she quickly leaped into action to help provide directions to a prospective student's parents.

"Every time I come back here, I feel at home," said Finch.

It's a feeling that has grown through the decades, just like the community's support and backing of the Wolfpack women's basketball team.

The introduction of Title IX in 1972 ushered in a new era of educational and athletic opportunities for women.

"Most people think Title IX is sports legislation. It's not. It is civil rights legislation," said Finch, who described it as "the most significant piece of legislation affecting women" in the country.

Finch's involvement with sports pre-dated Title IX when she held a number of roles at Wake Forest University.

"I coached field hockey, volleyball, basketball, tennis, taught classes and ran intramurals, but I was not full-time," said Finch.

After Title IX passed, she accepted a job at Peace College, where she was the Director of Athletics, head of the Physical Education Department, and head basketball coach.

"1972, (Title IX) passes, (North Carolina State Athletic Director) Willis Casey says 'hmm, I'm going to have to do this.' (In) 1975 he hired Kay Yow, the first woman in this state to be hired for athletics strictly to coach. Not to teach classes," said Finch, who credited Casey's foresight and willingness in approaching the legislation.

While Yow is known for basketball, Finch explained she also started volleyball and softball at the school.

While Title IX led to the establishment of teams, it was up to staffers and players to drum up support.

They established a strong relationship with legendary men's basketball coach Jim Valvano, and the two teams often practiced together, drawing students to watch.

"We knew that the fans here, the alumni, the media saw the best basketball in the world with State, Duke, Chapel Hill. So you can't fool them. You got to know what you're doing. You've got to be good," said Finch.

The Wolfpack were good fairly quickly, finishing first in the ACC regular season four times between 1978 and 1985, and winning three ACC tournament championships between 1980 and 1987.

"Once you get to know us, be careful, you might like us. And our players would recruit their classmates, and their professors to the games, to come to the practices," Finch said.

In 1987, Yow was diagnosed with breast cancer.

"As soon as Kay got her diagnosis, we were working on her press release to advise people she had been diagnosed with this and that this was the game plan. This was the surgery that was intended, this was the post-surgical plan, we had a game plan," Finch said.

A year later, Yow led the US Women's Basketball team to a gold medal in the 1988 Seoul Olympics, a feat that drew national attention.

"People in that time, in the late (19)80s, the treatments were so harsh that people thought she would not have the energy, not have the health to be able to coach," said Finch.

Privately, Yow would often connect with others in the Triangle experiencing their own battles.

"Kay would spend hours talking with people with breast cancer whom she had never met. She would go to homes of ladies here in Raleigh and Durham and Chapel Hill who called her, so depressed, Kay would go and talk about the great things about life and the future," said Finch.

In 2007, Yow helped establish the Kay Yow Cancer Fund, a nonprofit organization that to date has awarded nearly $8 million in grants and research for women's cancers.

You would continue leading the Wolfpack for 20 more seasons, capturing another ACC championship while racking up a 680-325 record during her tenure at NC State, as well as an additional 57 wins during her time at Elon.

In 2008, Yow stepped away from the Wolfpack because of cancer treatments. She died in 2009.

Her legacy is carried on through the annual Play4Kay game, which began in 2006. It is now observed at several other schools across college basketball.

As for the program she helped create, NC State is now one of the top programs in America under current coach Wes Moore, earning a No. 1 seed and reaching the Elite 8 this past season.

For her part, Finch held a number of leadership roles aimed at advancing women's representation, including serving as the inaugural Chair of the Women's Basketball Committee and as the ACC's first Women's Athletics Administrator, amongst other roles. In 2019, she was inducted into the Women's Basketball Hall of Fame. Despite her retirement, she still closely follows the team and athletic programs, continuing to push for greater efforts to elevate women's sports.