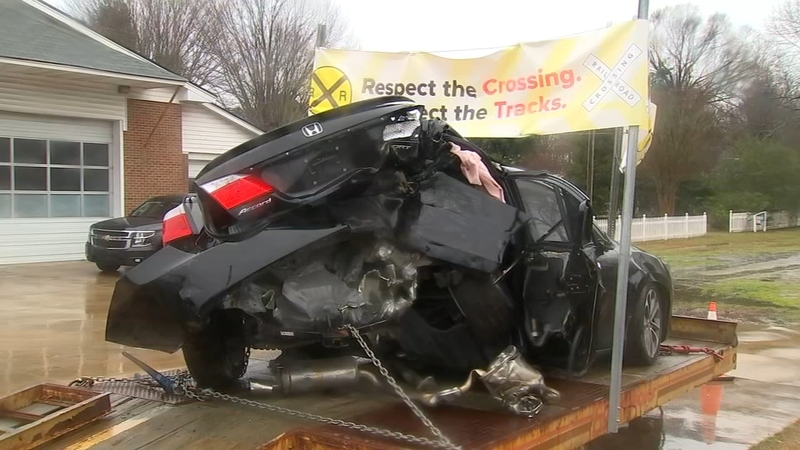 MORRISVILLE, N.C. (WTVD) -- Law enforcement officers are urging drivers to use caution at railroad crossings. In downtown Durham last month, a car was no match for an oncoming train near Fayetteville and Pettigrew streets.

The driver narrowly escaped the stalled vehicle thanks to North Carolina Central University Police Officer Stacey Desantis, who saved the woman before impact.

Law enforcement officials say these accidents can be prevented.

Around Thanksgiving, Morrisville Police say a train struck a vehicle that was stuck on the tracks.

"The guy was on the tracks; he got his family out before it was struck by a train," said Tim Hendrickson, patrol lieutenant with Morrisville Police.

Hendrickson said there are many causes for these types of wrecks, but the leading cause is drivers not paying attention.

For the rest of the month, his team is displaying that family's mangled car at the railroad crossing at Morrisville-Carpenter and Chapel-Hill roads to promote railroad-crossing awareness.

"The train does have right of way," Hendrickson said.

It takes a train travelling 55 mph more than a mile to stop.

Two of them were deadly.

Last year, statewide there were 53 crashes and six deaths. In 2018, 12 people died across the state.

Hendrickson suggests drivers stop and obey the traffic signals and markings -- and never try to drive around the gate.

If you see a vehicle in trouble, call 911 or the emergency dispatch number listed on the blue signs near the intersections.